What's Going on with the Tip Credit/Tip Penalty? 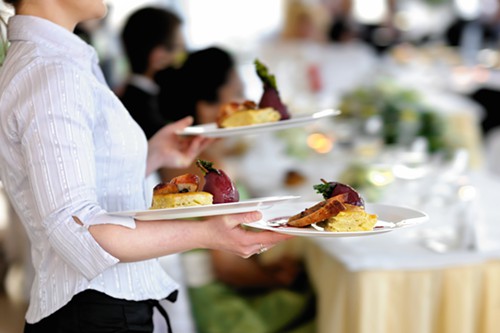 The mayor's committee on the minimum wage is set to finally unveil a policy recommendation by Wednesday, come hell or high water. And we keep hearing that what they're most deadlocked over is what kind of compensation would be included in a minimum wage hike—can employers count things like health care (you can't spend it, but it's worth money) or tips (it's money, but the employer didn't actually pay it) as part of a minimum wage? Is that a redefinition of what "minimum wage" means or just a savvy compromise to help out employers?

And the question of tips, in particular, seems to be a key component of the deadlock.

Council Member Kshama Sawant is still standing her ground over tips. On Friday, she was clear with reporters that she will not embrace any form of a tip credit—which creates a lower minimum wage for tipped workers—as part of a proposal out of the mayor's committee. Meanwhile, Goldy started floating a series of tip credit compromises on Horse's Ass recently, and it sounds like some of them may have a chance to become reality.

I want to talk about those, but let's take a step back: Why should anyone care so much about tips? Isn't money just money, regardless of whether you get it from your boss or a customer?

If we were to institute a tip credit in Seattle, it might, for example, keep the wage for tipped workers at the state level of $9.32, as long as with tips workers made $15. Which would mean: While you should still make $15 (enforcement is a whole 'nother thing, more on that in a second), your employer wouldn't have to pay you as much out of his or her pocket, as long as he or she makes sure customers pick up the slack.

WHICH, IN TURN, can incentivize bad behavior on the part of employers—encouraging sexier clothes or turning a blind eye to sexual harassment, say, or switching people to crappier shifts later in a pay period if they've made good tips early on.

As he put it, when it comes to enforcement, "simplicity does matter." You can get on any city bus in San Francisco, Jacobs says, "and you see a sign that says 'Minimum wage is $10.74,' and it's a in a wide variety of languages." The rule is clear to both employees and employers. In places with more complicated laws, he says, "where both workers are unclear on their rights and businesses are unclear on what they need to do, enforcement becomes a lot more difficult. So the more differentiation you have, the more obstacles you create around enforcement."

FEDERALLY, THERE IS A TIP CREDIT, and most states follow suit. And nationally, even though employers are supposed to make up the rest of that wage, so there shouldn't be a problem, the majority of tipped workers are totally fucked: tipped occupations make close to 40 percent lower average hourly wages, and tipped workers are twice as likely as other workers to live in poverty. And studies keep showing that tip theft and wage theft are rampant.

ONE MORE IMPORTANT THING: People who are in favor of tip credits like to bring up, as examples, tipped workers who make a lot of money—$20, $30 an hour. Which some people at really nice restaurants or really busy bars definitely do. But it's important to remember that the majority of tipped workers—a category that includes hotel maids, nail techs at salons, servers at crappy chain restaurants, and other less well-paid people—do not make that. The sides go back and forth with their data: The pro-tip-credit Washington Restaurant Association has said their own survey of restaurant owners indicates that bartenders and servers in Seattle make a little over $28 an hour, after tips. But Puget Sound Sage, which does not support a tip credit, analyzed state payroll surveys and found that Seattle bartenders and servers make just over $12 an hour with tips (that calculation only counts tips paid on credit cards, which seem to be around 90 percent of restaurant transactions, according to restaurateurs). And that doesn't even include those other job categories that technically make tips, just not generous ones.

Okay: Are y'all still with me? Good! Thank you! Just a little bit more, and you're gonna be so well-informed.

What Goldy has been considering on Horse's Ass is a question of compromise: If the business side and the labor side are both saying that a potential tip credit is a breaking point for them, could there actually be a compromise within the tip credit?

FOR EXAMPLE: If one of the issues is those tipped workers who make bank and don't require a minimum-wage raise to drag them out of poverty, could we institute a tip credit that only applies to less-well-tipped workers? One way to do it: Raise the amount of tips a worker must receive for their employer to be allowed to count those tips toward their wage. Federally, right now, you only have to regularly earn $30 a month in tips, and your employer can start paying you that lower wage of $2.13 an hour. Here, we could institute a much higher amount, in the hundreds of dollars, so that people whose tips aren't sending them on European vacations could enjoy a higher base wage, while restaurant owners could stop claiming that everyone's trying to put them out of business, and the higher-end servers would still be doing just fine.

Dave Meinert, a local restaurant owner who serves on the mayor's advisory committee, seems interested in that proposal, at least publicly on Twitter.

ANOTHER IDEA: A phase-out of the tip credit. Set it up so that employers of tipped workers can enjoy some sort of a tip credit at first, but slowly phase it out as you ramp up the minimum wage over time, so that in a few years, they'll be responsible for the full base wage, but will have had time to get there.

I've heard the phase-out idea gaining some traction behind the scenes at city hall.

BUT, FOR HER PART, SAWANT IS HAVING NONE OF IT: "We have no guarantees," she says, that the phase-out will actually occur—lots of policies are enacted with the idea that they'll sunset over time, but then they're consistently revived (or revised) by politicians who are afraid of the end result. She called out the Bush-era tax cuts, for one.

She's not interested in this new round of tip compromises. "None of this, even if it sounds new, is new," she says, calling these proposals "old tactics wrapped up in new semantics." A three-year phase-in of $15, she says, is already a compromise, and one that will cost low-wage workers for each year it's implemented. She's also looking ahead to the next month or two, where whatever comes out of the mayor's committee will have to make it through city council—if she compromises on a central issue now, it may get further watered down in the eventual legislation.

Still, if tips are the breaking point (look at me, not using "tipping point"!), a compromise on them may well be part of what we see this week.

And the fight will rage on.

Comments 48
Tags: Blogs City
The Stranger depends on your continuing support to provide articles like this one. In return, we pledge our ongoing commitment to truthful, progressive journalism and serving our community. So if you’re able, please consider a small recurring contribution. Thank you—you are appreciated!
CONTRIBUTE NOW