What Are Those Poles Along Second Ave?

A couple of days ago, Slog reader Elissa sent us this photo and a question: 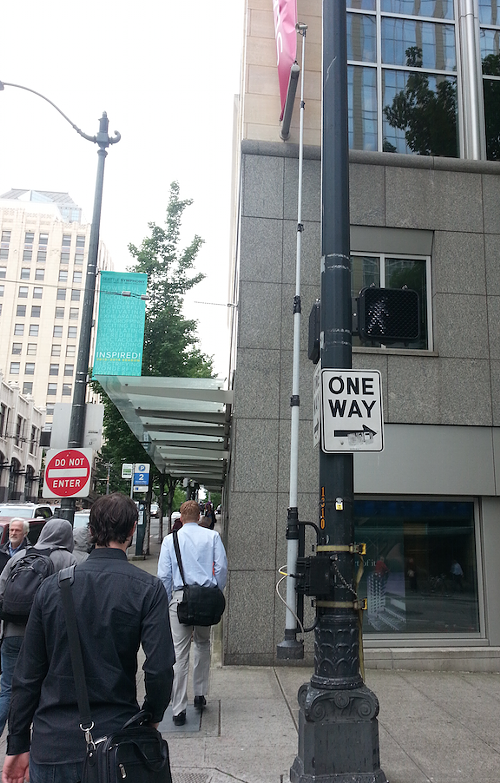 these poles showed up at 2nd and union today, little speakers? just wondering if y'all know what they are, could be standard street stuff for all I know.

They're for a study commissioned along Second Ave, he said: "These are generally what the contractor uses—a device that has a camera on that high pole, to capture video of the movements of vehicles and pedestrians at the intersection." Then that data (how many went by, who turned left, who turned right, and so on) is fed to a computer, which spits out a report about traffic behavior, which helps SDOT figure out things like how to time traffic signals.

The city does hundreds of these studies a year, Moore said, which are sometimes done manually—a person hangs out at the intersection for certain slices of time (peak morning traffic, peak evening traffic, off-peak midday traffic) and clicks little buttons on a counter to record how many people, bikes, and motor vehicles pass by and what they do. "But the cameras are more cost-effective," he said. "The city is looking at purchasing that type of equipment for automated studies." Currently, if the city wants to study traffic in this kind of automated fashion, it needs to contract out the work.

What is this particular study for? "I don't know," he said. "But I think it has to do with the mayor's announcement about building a protected bike lane on Second Ave."

So there you go, Elissa. Asked and answered! (Maybe that should be the title of a new Slog series...)

Comments 11
Tags: Blogs City Bikes
The Stranger depends on your continuing support to provide articles like this one. In return, we pledge our ongoing commitment to truthful, progressive journalism and serving our community. So if you’re able, please consider a small recurring contribution. Thank you—you are appreciated!
CONTRIBUTE NOW