Last night, Northwest African American Museum held an event called PKN SEA vol. 56 #Ferguson. It was organized a week before with Pecha Kucha Seattle and Seattle People of Color Salon, and concerned the young and unarmed man, Michael Brown, who was killed by a white police officer in Ferguson, a predominantly black suburb of St. Louis. The event was a huge success. The lecture room was packed with people, and the line of those waiting, hoping to get into the overcapacity event ran all the way to the field nearby. There were 13 speakers (I was one of them), nearly all were black, and the audience was thoroughly mixed—Asian Americans, white Americans, black Africans, black Americans. The mood of the event was that of church. Many in the audience responded to the presentations—some by atheists, some by feminists, some by unrepentant punks—as if they were sermons. This was secular church, a church of the here and now, a church for believers and nonbelievers. 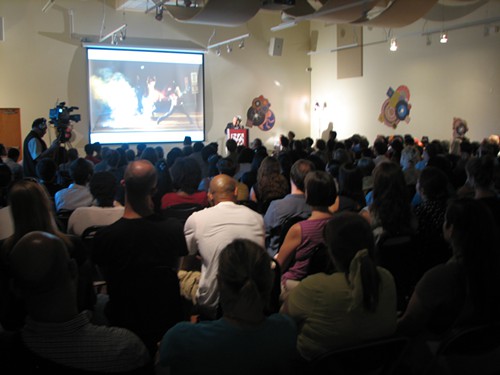 The success of this event represented the growing relevance of NAAM on the city’s shifting cultural landscape. Despite being a black American museum in a neighborhood that’s becoming less and less black and more and more white, it’s proving to be very much alive and not, as it could easily have become, a massive tombstone for a kind of neighborhood that will be no more in a matter of years. In this way, the main exhibits at NAAM, which, like Pitch Black, tend to be historical, work as an active background to the present. The dead are not done here. Their struggles extend to the new and changing struggles of our day. What happened in Ferguson has a context at NAAM. This is why people came to the event, to this place, at this time. The effect and impact would not have been the same if it happened at the Henry or even the Frye. The potential for church at Seattle Art Museum is nearly zero.

But NAAM could easily have been a tombstone. There is nothing really wrong with that. It’s safe. It’s not controversial. Pitch Black, which concerns black baseball history in Washington state, was after all sponsored by the Seattle Mariners, Boeing, Key Bank Safeco Insurance Foundation, Verizon Wireless, and Wells Fargo. These corporations would never have touched the Ferguson event with a pole that could reach the moon. Much of black history has lost its sting. It’s not unusual for a Republican to see Muhammad Ali as a national hero, or to say kind things about the March on Washington. But the present is risky and even explosive. Many of the speeches and slides that were presented at NAAM's #Ferguson were charged by the hot emotions. For example, Tyrone Brown, the artistic director of Brownbox Theater, said that Americans no longer believe in God but in the gun, and ended his talk with the blasphemous declaration: “Gun Bless America!” Lara Davis, Arts Education Manager at the Seattle Office of Arts & Culture, played raw punk tunes over clips of people at the recent Afropunk festival in Brooklyn describing the US as place of institutionalized violence. Davida Ingram, a local artist and a 2014 nominee for the Genius Award in Art, explored the history and meaning of the expression “motherfucker” (white slave owners fucking black mothers). The people in the room needed this heat, this anger. They came here to share their shock and rage at the images the filled the screens on phones, TV, computers. Images of the dead black man on the street, a police department that was clearly being armed by the Pentagon, and an unresponsive president. How can you be black and not be pissed? An unarmed black youth is killed and instead of investigating the police officer, the department besieges the neighborhood like an occupying army.

The black population in the Central District might be dwindling, but NAAM appears to be an institution with a future.