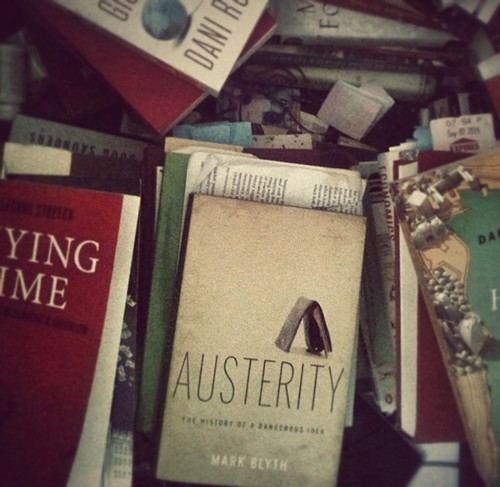 This is how it works. When you buy a CDO it's recommended you also buy a CDS. A CDO is a "collateralized debt obligation." These are financial assets that were in high demand in the years leading up to the crash of 2008. CDOs connect an investor to revenue streams from a variety of mortgages. The dream of all dreams was that this class of financial products could not go bad because they were so mixed. They pooled mortgage payments from the satisfied in Manhattan with those from working-class folks in the suburbs of Phoenix. Risk was further reduced by breaking these securities into tranches, or sections that ranged from safe to not that safe. Lastly, to reduce risk to an absolute minimum, the investor could buy an insurance policy, a CDS ("credit default swap"), that would protect him/her from default on a purchased debt product.


But here is the funny thing, and the reason for this post: Why is an insurance policy called a swap? A swap is not an insurance policy. It is instead a complicated forward. A forward is a basic derivative—meaning, a contract between a buyer and dealer to sell some commodity at a fixed price in the future. A swap is in essence a linked series of forwards, a series of agreements set at a price that does not vary; and so, as Ha-Joon Chang explains in his new book Economics: The User's Guide, looks much like "the contract for your mobile phone." So, is a CDS an insurance policy or a fancy derivative? The years of confusion about this matter only came to an end when I finally learned that, like much else in the world of finance, the confusion is not unintended. From a note I recently discovered in the back of Mark Blyth's Austerity: The History of a Dangerous Idea:

A CDS is called a swap but is actually quite different from most swaps. It was called a swap mostly to avoid regulations that would kick in if it were named what it really is, an insurance contract. Insurance requires reserves to be set aside, but swaps don't, which was a huge part of their problem. Again, I thank Bruce Chadwick for this clarification and Bill Janeway for stressing the lack of an insurance reserve as a key structural weakness of CDS.

Remember AIG? That's why they were selling CDSs, and that's why they had to be bailed out with public funds. And neoclassical thinkers have the audacity to call all of this scheming and scamming economics.
Comments 9
Tags: Blogs Economy