Why Much of Poor Black Africa Is Already in the Future 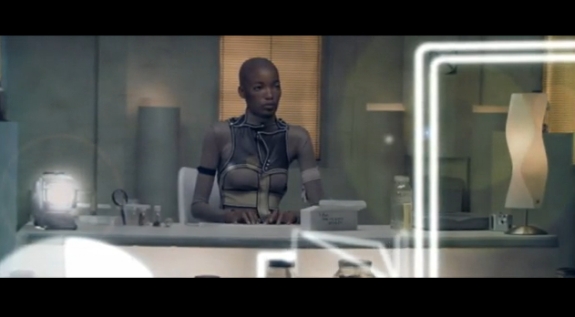 Kudzani Moswela in Pumzi, an important black African Afrofuturist work. Focus Features
The bulk of what's interesting in the Guardian's post on the current wave of black African Afrofuturism (which must be distinguished from black American Afrofuturism) is found in its last two sections, which bring up the founder, William Gibson, of a movement of science-fiction literature, cyberpunk, that has yet to be exhausted and some inchoate (or even echoic) thoughts about African urbanism. But even here, what we see are lots of missed opportunities for the new kinds of thinking that Afrofuturism promises. For example, the author of the post, Jessica Bland, when considering the street life of African cities, points out the Eurocentrism, in the form of the modernization myth, in Gibson's "overused" statement that “the future is already here—it’s just not very evenly distributed.” For Bland, Africa does not have to wait for the existing future in the West to arrive but can follow a completely different path to its own culturally distinct destination. Fair enough. But here is the problem with this line of thought: Much of Africa is already in the future, and not because of the popularity of mobile banking, or the abundance of internet cafes, or the Afro-pop experiments with high-tech electronica, and so on. It is in the future because much of what was initially coded as modern/futurist/progress in the West, such as automobile transportation, is now recognized as backward when compared to, say, cycle transportation, which in the past was coded as backward. There is nothing more primitive than being stuck on I-5.


Indeed, Beijing in the early '80s, when bicycles dominated its streets, was, in this sense, more in the future than it is now, when cars clog its streets and hog valuable space. China is going backward in so many ways. Progress has become a mixed bag. Black Africa must see and expand the future that already exists in many parts of its underdevelopment (I call this horizontal progress—as opposed to 20th-century vertical progress). The fact that 60 percent of trips in Addis Ababa are made on foot (6 percent in cars) is so 2015 and beyond; whereas the fact that just below 50 percent of commuters in Seattle are solo drivers is, though impressive for an American city, still so 1950s—a period, by the way, that madly imagined space travel in sterile, metal-clean spaces, whereas we now see correctly that travel into deep space will have to be muddy and with our messmates (life is not a thing but a system of things).

And so a part of the future is in the West, and another part is already in black Africa. Visually speaking, the future of humankind will have to look a lot like the Paris that's right around the corner:

According to a new French law approved on Thursday, rooftops on new buildings in commercial zones across France must either be partially covered in plants or solar panels.