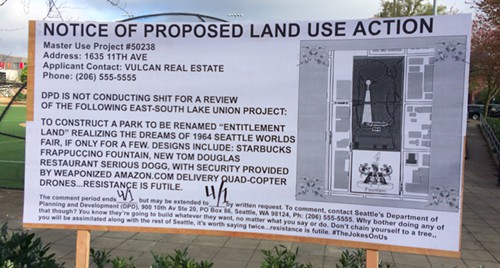 Capitol Hill as we once knew it—the Capitol Hill of the late-1980s through the early 2010s—is done. And by "done" I mean "changing/changed." And guess what? The neighborhood has changed before. Every neighborhood changes. Nothing about a city is static. A city is growing or contracting but it's never static. Sometimes the pace of change is dizzying, yes, and this is certainly one of those times. But Capitol Hill wasn't always the gay neighborhood, it wasn't always the artsy neighborhood, it wasn't always the neighborhood with the cheapest apartments, retail, and warehouse spaces. And things lefties and progressives used to hate—white flight, cheap gas, urban expressways, suburban sprawl—are what made the centers of American cities the cheapest places to live and work. That was a cultural and historical aberration. Those days—the days when the centers of cities were the cheapest places to live and work—are over and they're not coming back.

So it seems to me... and forgive me for my apostasy... and as much as I've enjoyed the various hilarious posters... but it really does seem to me... that some of the energy currently being expended on bitching, moaning, and slapping up "Fuck You, Bros!" posters could be put to better and more constructive use. Like, oh, creating a brand new scene in a brand new neighborhood? We aren't powerless. We are powerless to "save" Capitol Hill. But we have the power—or you do—to create a new Capitol Hill in Pioneer Square or on Beacon Hill or in South Park. And guess what? You will be to those 'hoods what the bros and techies are to this 'hood: The new arrivals, the disrupters, the first-wave gentrifiers. (Have you read this great piece on gentrification and the long, ever-changing history of one Oakland neighborhood at Slate? You should.)

Another better use of our time and energy: Pushing for the construction of more affordable housing units (even though we'll never be able to build enough to make up for what's being lost). Pushing to rezone more of the city for multi-family dwellings (and allowing for the construction of more apodments). But the single best use of our time? Pushing hard for the fast-tracked construction a city-wide mass transit system—fixed rail, grade-separated, runs all night, trains that run every ten minutes (or less) all night long. A mass transit system like that would make it possible for people to live in at the far north or south ends of the city—or in the north or south suburbs—without having to own a car and without being cut off from everything the city has to offer (jobs, art, booze, sex, possibility). 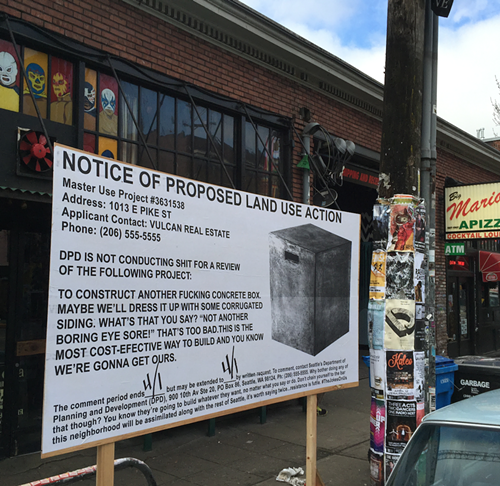 Posters are funny, but they're not going to do anything. Light rail into the suburbs? That would be something. Erin Resso

I grew up in Rogers Park, a neighborhood on the far northern edge of Chicago. But Rogers Park felt like an integral, even central part of Chicago, thanks to the city's elevated transit system, aka the "L."

Rogers Park is working class neighborhood on the lake, that city’s defining geographical feature, and it’s also on the Red Line—the Howard when I was growing up—and the L took residents of Rogers Park anywhere we wanted to go in Chicago. There was plenty we could get to on foot: drug stores, junk stores, second-run movie theaters, donut shops, parks, diners, schools. But Wrigley Field, The Loop, the Art Institute, first-run movie theaters, Old Town, Boystown, Navy Pier—the whole fucking city—felt like part of the neighborhood too, thanks to the L. The L was extended out to O’Hare airport when I was a teenager, instantly turning "the world’s busiest airport" into the farthest flung corner of the neighborhood.

The house where I grew up was 11.3 miles from my high school. It wasn't a problem getting back and forth to my my high school, thanks to the L. The office where I'm typing this is 11.3 miles from Tukwila and the prospect of going to Tukwila—for school, to find a cheap apartment, for anything—is daunting. I've lived here for 24 years and I've been to Alaska more times than I've been to Tukwila.

Care about the poor? Check out this story at Gawker. Poor and working class people are being forced out of urban neighborhoods and into the suburbs. It's happening here too. And it seems to me... and, again, forgive me for my apostasy... but it really does seem to me that trying to "save" historically poor neighborhoods, i.e. pretending that we can stop "gentrification," is a waste of time. It would be better idea to get out in front of changes that are already happening and will continue to happen no matter how many "Fuck You, Bros!" posters go up on light poles outside of the bars "they" stole from "us." (Those are the same bars "we" stole from "them" back in the day.) Pushing to get rapid transit out into the suburbs—aka the new inner city—might actually help the people who are being forced out of the cities. Posters? Not so much.

Comments 52
Tags: Blogs City
The Stranger depends on your continuing support to provide articles like this one. In return, we pledge our ongoing commitment to truthful, progressive journalism and serving our community. So if you’re able, please consider a small recurring contribution. Thank you—you are appreciated!
CONTRIBUTE NOW