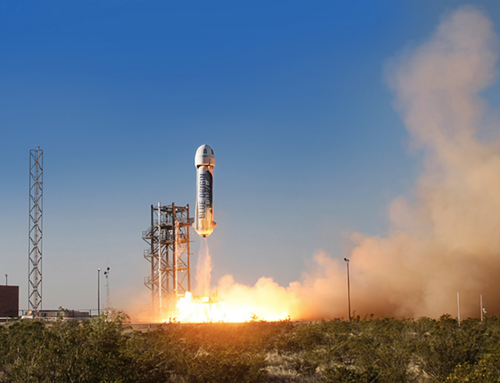 The spaceship is marked with the words "Blue Origin" and a drawing of a quill pen (?). Photo by Blue Origin

That spaceship is called the New Shepard, and it almost reached suborbital flight yesterday—it got to an altitude of 307,000 feet. As Forbes writes, that's "just shy of the 328,084 feet that’s generally considered to be the boundary of space."

Bezos and his baby. Photo by Blue Origin

Yesterday's spaceship was launched from a facility in Culberson County, Texas. It is an ugly place. It recalls that desert the astronauts in the '70s conspiracy thriller Capricorn One crash into after escaping confinement in a secret government location.

In this video of yesterday's launch, we see low but towering clouds, dark and dry hills, a dusty road, shrubs, the launchpad, the rocket, the engineers, the row of computer monitors in ground control, the countdown, the smoke and dust, the yellow and clear flame, the dreamy rise of the vehicle.

"The in-space separation of the crew capsule from the propulsion module was perfect," Bezos said. "Any astronauts on board would have had a very nice journey into space and a smooth return."

It may surprise you, as it did me, to learn that Bezos is not doing all of this just for fun. He has it in mind to make some money from the project in the future. Here's the sales pitch:

He wants to make spaceflight affordable and his spaceships reusable. But really what is the use of reaching space only to end up in earth's orbit? What kind of vacation is that? Sitting in a capsule and looking down on creation for a couple of days? 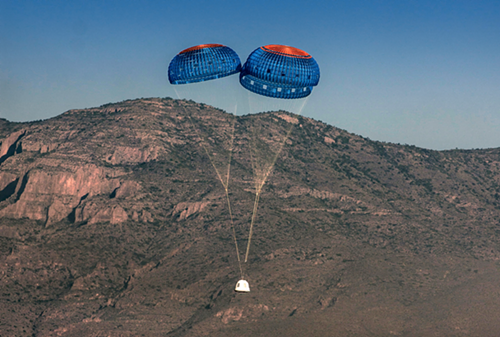 This is the capsule that human beings would be inside, making its descent yesterday in the Texas desert. Photo by Blue Origin

Then again: Once the humans got out of the crew capsule? Who knows. This is Texas. There are many kinds of poisonous snakes hissing in the shade of those shrubs.