This photo was taken at dawn on May 5, 2015. Photo by Michael "Panda" Hernandez

In the wee hours of Tuesday, May 5th—a week ago—a mysterious sign appeared above Starbucks on East Olive Way. The sign said "FUCK." According to a person who's identified himself to me as the artist, Starbucks management took it down almost as quickly as it went up, but not before blogger Michael “Panda” Fernandez snapped a few photos at 5:30 AM.

A photo of the sign started some buzz on the Portland-based coffee culture blog Sprudge. An Imgur user later posted another picture of the sign, which has been viewed more than 137,000 times as of this writing.

The sky got a little brighter before the coffee-making authorities made off with the cardboard letters. Photo by Michael "Panda" Hernandez

On my way to meeting the artist who claims responsibility for the sign, and who's told me he will only talk if I keep his identity anonymous, I try to think of a pseudonym to give him. Hoping to evoke other Northwest legends, I decide on Kurt Cooper.

Kurt Cooper has quietly observed the (mostly enthusiastic) response to his handiwork online. While refusing to step forward to identify himself to the public at large, he says his girlfriend convinced him to take photos of the sign’s construction beforehand, which strongly substantiate his claim to be the artist behind the prank. Those substantiating photos are below, along with a Q&A with him. (Without the photos, Kurt Cooper might be taken for one of several copycats who have reached out to the press, seeking to take credit.)

Even if it has passed into municipal memory and no longer exists in physical form, it feels right to refer to Fuck Starbucks in italics—as a standalone work of art. 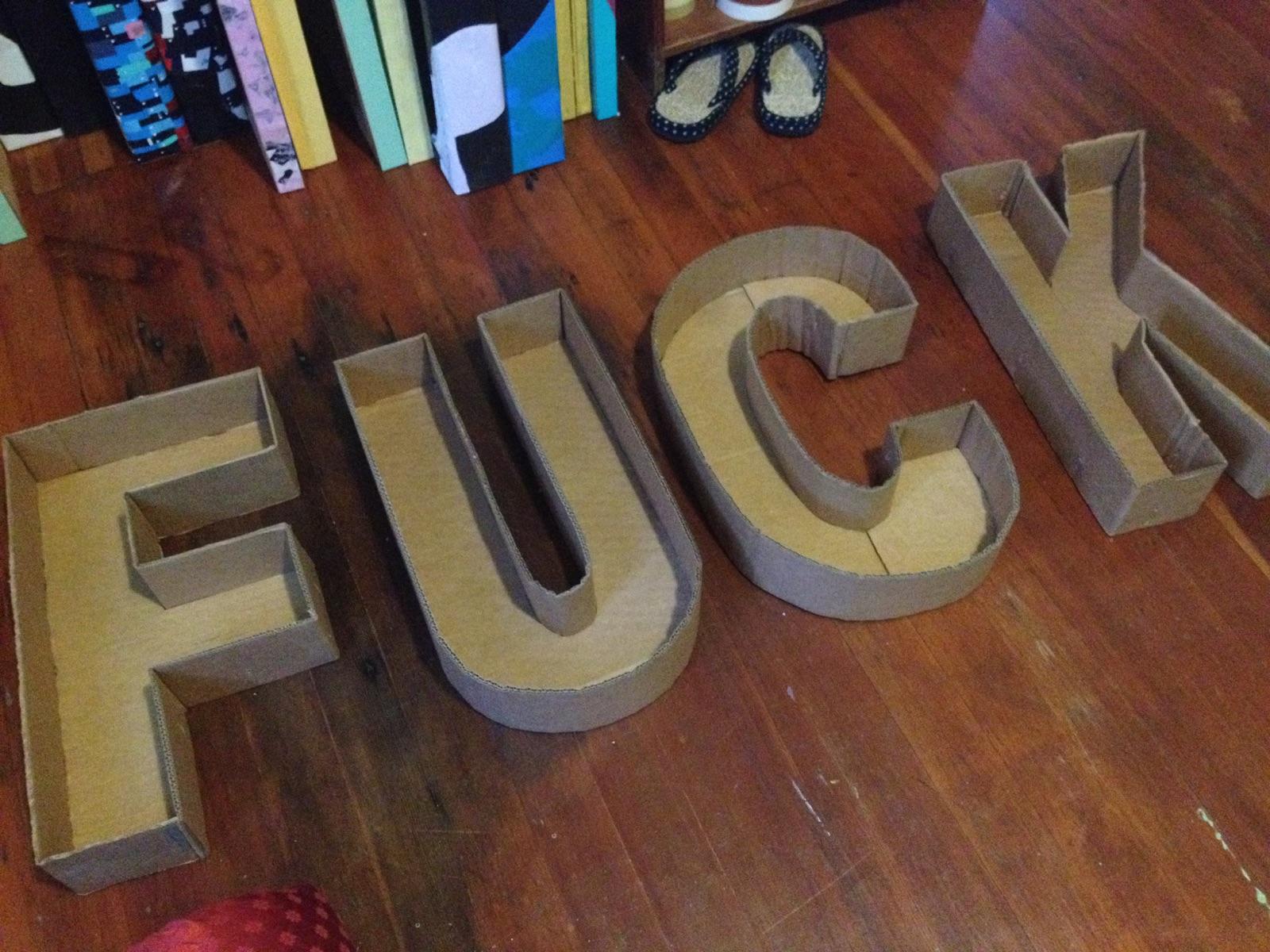 The letters before they were painted, carried up onto the roof, and installed above the Starbucks sign. Photo Courtesy of Kurt Cooper

The Stranger: When Fuck Starbucks went up, it was the morning after some May Day riots, when the Starbucks Reserve Roastery & Tasting Room on Pike preemptively boarded up its windows. What can you tell me about why you made this?

Kurt Cooper: When I initially started working on this, the “Race Together” campaign was in the news and anti-Starbucks feelings around town were at quite a fever pitch. When a company like this grows and reaches a certain level of big-ness, the public doesn’t have a say in how it operates. If you have a difference of opinion, you're stuck with it. That's our condition, and I want to fight it.

The Stranger: Why express your opinion about Starbucks through this particular action?

Kurt Cooper: In the placement of the letters and the font, I wanted to do something that confused people who rely on media signs to guide them towards something. I didn’t destroy or damage anything—I created. I wanted to make it look like maybe Starbucks could’ve been the ones who did it. As an artist, I’m constantly observing what gets labeled as “vandalism,” and how we as a society decide what kind of content it’s okay to barrage ourselves with. 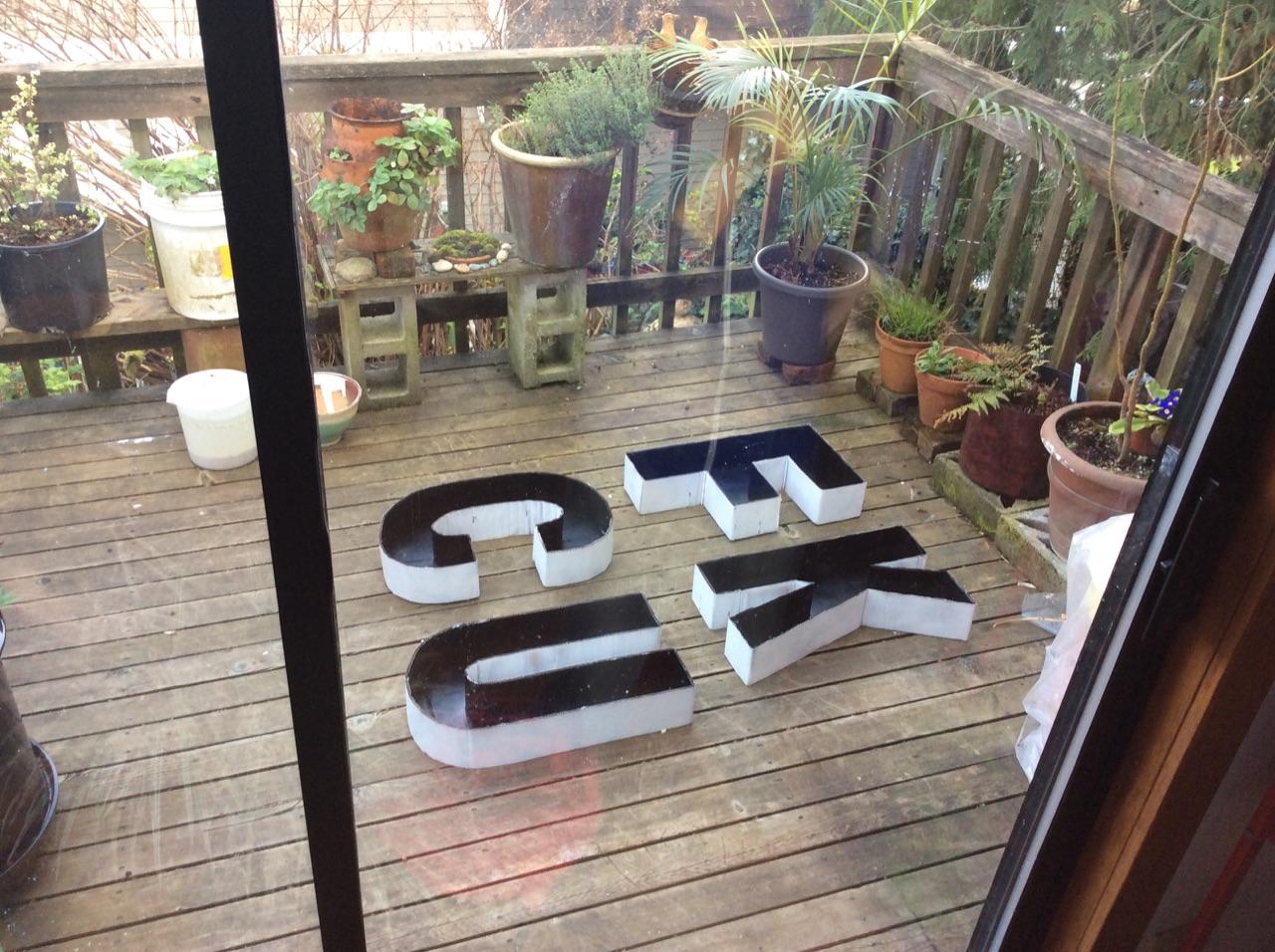 Kurt Cooper says the installation was tricky because it was rainy and windy, but "dressed in black, on top of a building in the middle of the night, nobody could see me." Photo Courtesy of Kurt Cooper

The Stranger: What was going through your mind when you were putting up the sign?

Kurt Cooper: It was dark. It was 3:30 a.m. I knew I wanted to pick a Monday [night], when traffic to and from the bars would be at an absolute minimum. I had a friend who hauled the ladder for me, and held it so I could climb. Being a graffiti artist who's been arrested before, I was pretty paranoid. But I also have a lot of experience dealing with nerves when the time for action comes. I just had to realize: Up there, dressed in black, on top of a building in the middle of the night, nobody could see me. Coming away from the scene, looking back at where I had been, I realized I probably wasn’t very visible at all.

The Stranger: Few people actually got to see the sign in person, so it’s taken on this odd mythic quality. Almost like our generation’s version of the “Will The Last Person Leaving Seattle Please Turn Out The Lights” sign, except stranger and more specific.

Kurt Cooper: Honestly, because it was quite windy and rainy when I put it up, I wondered whether the sign would survive for anyone to see it. As the day wore on, I knew it made it because people posted about it on Facebook pretty extensively.

The Stranger: You have Michael "Panda" Fernandez and his pictures to thank. Actually, he said he didn’t even notice the gigantic "FUCK" at first, because of how perfectly the fonts matched. That’s how you wanted it to be received and remembered, right?

Kurt Cooper: I was so gratified on a deep level as an artist to read that. There’s far more dangerous corporate graffiti than individual graffiti in this world, so we have quite a bit of space to reclaim. I’m going to continue to crusade for that thought.

Comments 52
Tags: Blogs Arts Money
The Stranger depends on your continuing support to provide articles like this one. In return, we pledge our ongoing commitment to truthful, progressive journalism and serving our community. So if you’re able, please consider a small recurring contribution. Thank you—you are appreciated!
CONTRIBUTE NOW