For the First Time in History, a Dinosaur Fossil Has Been Discovered in Washington State

Washington's new pride and joy: a portion of a dinosaur's femur. mpt
Washington State has its first dinosaur fossil, you guys!!! Today Burke Museum Curator of Vertebrate Paleontology Dr. Christian Sidor and University of Washington Department of Biology graduate student Brandon Peecook published their findings, and I got to meet them and see the fossil in person. (You can go see it, too.)


So what is it?! It's an 80-million-year-old piece of a four-foot femur from a carnivorous dinosaur most likely in the tyrannosaurus genus—not a T. rex, who lived only about 65 million years ago, but definitely a big, toothy predator. (Which, as Peecook pointed out, is just as scary if you're speeding away from it in your Jeep.)

What we now call Washington State was under water when dinosaurs were living and dying and beginning their journey to fossil-hood, which explains why there have not been more dinosaur fossils finds here. Marine vertebrates (which are not dinosaurs), marine invertebrates (like ammonites), and a wealth of paleobotanical specimens, yes. But no dinosaurs.

But somewhere along the line this large theropod died and and part of its femur washed up on our shores. Three years ago, it was discovered in the San Juan Islands by a team of Burke Museum research associates who were collecting marine invertebrate specimens at Sucia Island State Park. A crew of Burke paleontologists collected the fossil, which was embedded in marine rock, and over the next few years they worked on cleaning and researching the specimen. Which brings us to today's announcement.

How do they know this is a fragment of a theropod dinosaur? As Sidor and Peecook were able to determine:

1. The hollow middle cavity of the bone (where marrow was present) is unique to theropods during this time period.

2. A feature on the surface of the bone (the fourth trochanter) is prominent and positioned relatively close to the hip, which is a combination of traits unique to some theropod dinosaurs.

Washington is the 37th state to be able to boast a dinosaur fossil find:

“The fossil record of the west coast is very spotty when compared to the rich record of the interior of North America,” said Peecook. “This specimen, though fragmentary, gives us insight into what the west coast was like 80 million years ago, plus it gets Washington into the dinosaur club!”

You can read all about the discovery on the Burke's website, on the Burke's blog, and in the journal PLOS ONE. Below are some photos from this morning's press conference as well as an image from the journal showing details of the specimen. 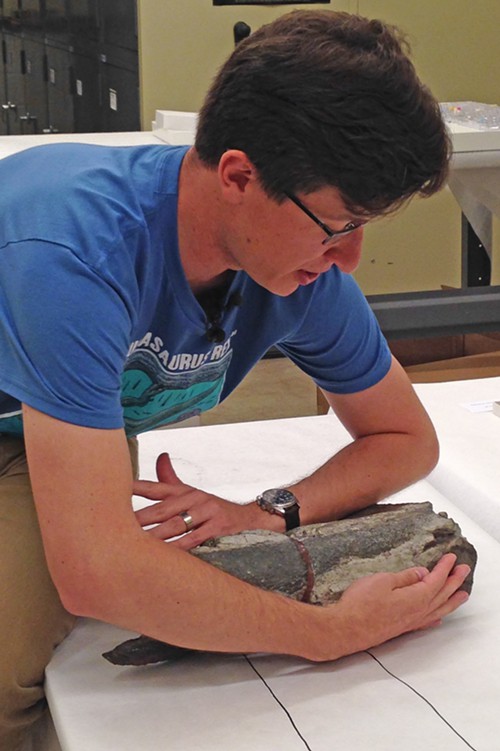 Peecook explains how much of the bone was exposed when it was discovered. mpt

Various views of the fossil. The silhouette shows where the fragment originates on a femur. The part labeled "4tr" shows the protrusion that helps identify this as a theropod fossil. Courtesy of PLOS ONE/doi:10.1371/journal.pone.0127792.g002

For more dinosaur news, follow Today in Dinosaur News on Facebook and Tumblr. Have a hot dinosaur news tip or question? Send it to dinosaurs@thestranger.com.

Comments 6
Tags: Blogs Dinosaurs
The Stranger depends on your continuing support to provide articles like this one. In return, we pledge our ongoing commitment to truthful, progressive journalism and serving our community. So if you’re able, please consider a small recurring contribution. Thank you—you are appreciated!
CONTRIBUTE NOW