No matter what they change your name to, you'll always be the Seattle Public Library to me. Max Herman / Shutterstock.com

Oh, god, really, Seattle Public Library? You are so committeed up and you have so much extra dough sitting around* that you've hired a design agency "to develop a rebrand"? (Full press release at the end of this post.) Ugh, fine, okay, I'll take your survey. I love the library, I'm happy to help.

Here, everyone, take the survey. 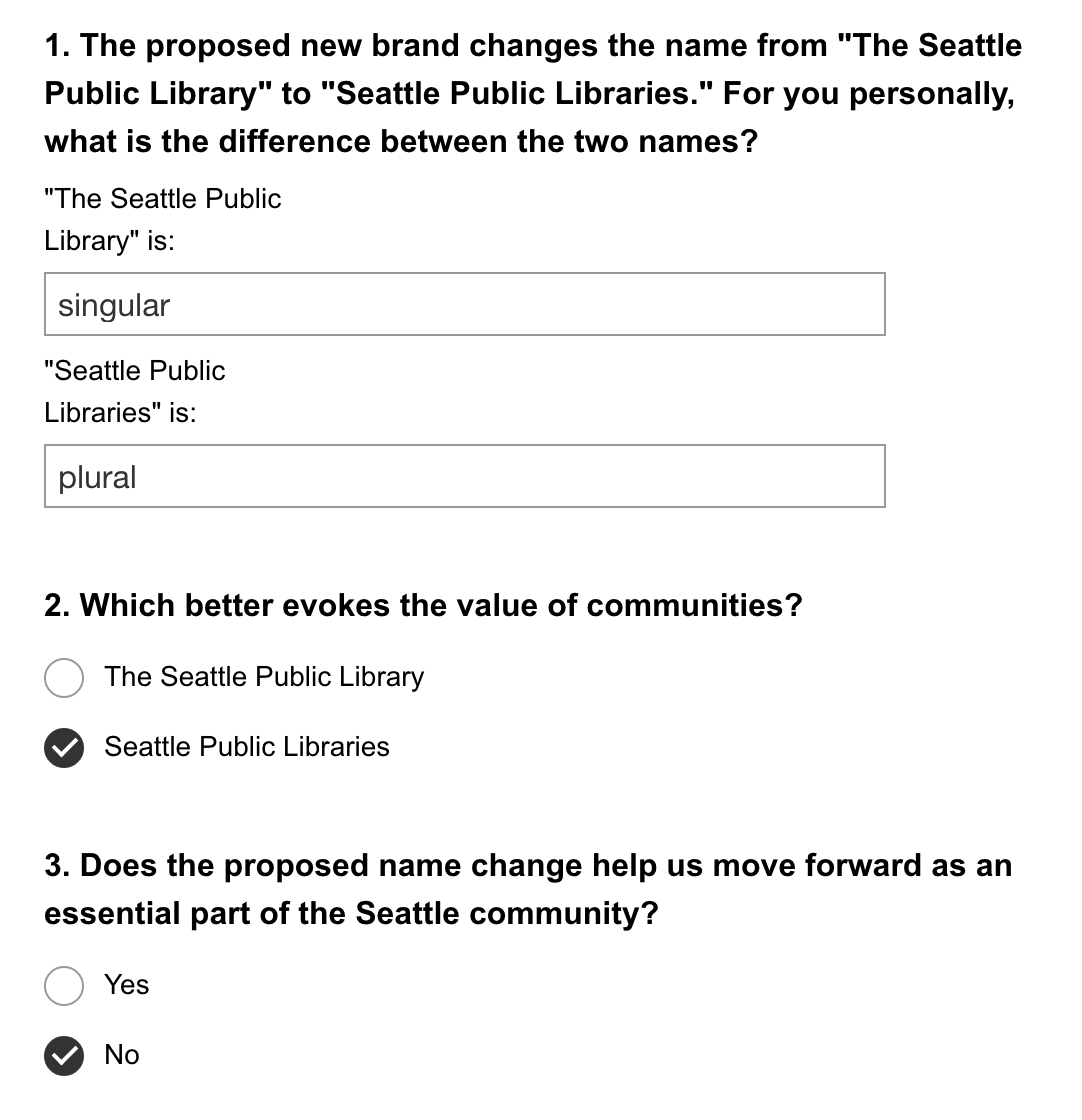 Sorry to show you my answers. You should answer your own personal truth.

As for which "brand" identity of the two evokes "communities"? Curious question. "Communities" is plural, so the only one that evokes the plural word is the other plural word. Is that really what you wanted to ask? Is this a survey or is this a new-media, feel-good smokescreen for a decision someone wants to make without being on the hook for making a decision? Just change the name if you want to change the name! Clearly, someone wants to change the name, but they also and just as importantly want to be able to say, later, "Well, Susan, everyone who answered the survey said 'libraries' evokes 'communities' more than 'library' does, so we better change it, because democracy."

As for question 3: Far be it from me to just underline what a pointless exercise this is with an example, but something that would concretely help us move forward as a community even more than whatever letters you want to hang on the wall is, say, having a microfilm/microfiche situation that doesn't require running back and forth between the microfilm machine and the printer and having to punch in very long sequences of numbers and passwords each time one wants to print a single page. But that's just me. (Sincerely, thanks for all the help couple weeks back, library staff—you are awesome. It's the administrative apparatus around you, epitomized by this goofy rebrand, that fills my head with question marks.)

Okay, moving on, it's time to see the new "brand statement"! Here we go. Screengrab from my phone while I was sitting at Madison Pub last night trying to help the library.

I didn't have room in the field to type the following:

2. Kind of. I mean, how much difference is there between "learning" and "knowledge"? How much overlap on the Venn diagram do "learning" and "knowledge" have? If you're going to put three nouns in a row (and confusingly make one of them seem like a verb) it might be clearer to choose three nouns that are distinct from each other, instead of two that are slightly redundant (one of which doesn't even read as a noun the first time through).

3. "We preserve and create opportunities for the people of Seattle who make it such a dynamic and desirable place to live." Huh. Sounds nice. But then it makes you think. What about the people who do not make Seattle both "dynamic and desirable"? What about painfully shy people who rarely leave the house? Are they good, too? Or is the library only for people doing cartwheels and condo conversions?

4. "When we're empowered as individuals, we're STRONGER TOGETHER." Is that possibly from some other piece of text and that accidentally got copy/pasted into this? Did someone goof? Or, wait, no, is it an homage to Lindy West? Also, I'm not sure I want to be stronger (you saying we're weak?) but I would love to print out a single page of a microfilm of the Seattle Times in 1970 (some things you can't find on the internet) without having to press dozens of buttons and run back and forth between machines logging in and out of antiquated software, if that could be arranged?

At the next stage of the survey, there are three logos presented for your delectation. My guess is that the logos are where all the work went, after all this was a design firm, not a words firm, and all the logos are fine. One is finer than the others, in my opinion. You should go vote and we'll find out on October 28, when a bunch of people wasting a lot of time have a big meeting to decide what to make of what you made of the questions they asked.

* UPDATE: The design firm is being paid $365,000 for this work by the Seattle Public Library Foundation, which relies on outside and private donations.

Here's the full press release from the library:

The Seattle Public Library is seeking public comments on a proposed new logo and name change.

“The Seattle Public Library is about books, but we are so much more,” said City Librarian Marcellus Turner. “An updated look and name will better reflect what our Library system is today – active community hubs where residents learn, grow and gather throughout their lives. Our libraries are where students get homework help, the unemployed find career assistance, and those without Internet access can use a computer or our free Wi-Fi. They also are where residents meet for candidate forums, author programs, educational workshops, films and even to watch Seahawks playoff games.”

Seattle-based design agency Hornall Anderson was hired to develop a rebrand with funding from The Seattle Public Library Foundation.

The public is invited to see and comment on the overall brand statement, proposed name change and proposed logos. The information is also available in all Library locations. Comments will be collected through 5 p.m. Sunday, Oct. 11. The Library Board is slated to make decisions at its Wednesday, Oct. 28 meeting. For more information, call 206-386-4636 or Ask A Librarian.