But whoever is in charge of the new Moments feature does not get me. Is there anyone who likes the Moments feature? I like the lightning bolt itself—the logo for the feature—but Jesus Christ the feature itself is the dumbest thing I've ever seen. I only look at it to laugh at it. Two hours ago, Taylor Swift was at the top of Moments—zzzzzzzz—and when I scrolled down, the second, third, fourth, fifth, and sixth thing were as follows. See below. Is there one that you would click on? That you care about? No, there is not.

Okay, so I maybe there's one I would click on. "Your Favorite Tweets from 2015" was vaguely (emphasis on vaguely) curiosity-provoking. How did Twitter know what my favorite tweets were in 2015?

Here, according to Moments, is one of my "favorite" tweets of 2015:

I'm sorry: what? (According to Twitter, it was retweeted 972 times. One of the favorite tweets of 2015! Is Twitter doing much more poorly than I realized?)

Now that the Tamir Rice news is out, Tamir Rice has become the top Moment (did anyone at Twitter ever try to use the word in a sentence?). At this moment, under the depressing and important Tamir Rice news is a bunch of really important and vital journalism about law enforcement, institutional racism, and the sham that is the grand jury process. Hahaha, just kidding! None of those are Moments right now. Under the Tamir Rice Moment is the same horseshit I mentioned before, about Taylor Swift, catbreading (????????), and my "favorite" tweets. Oh yeah and something Star Wars-related. 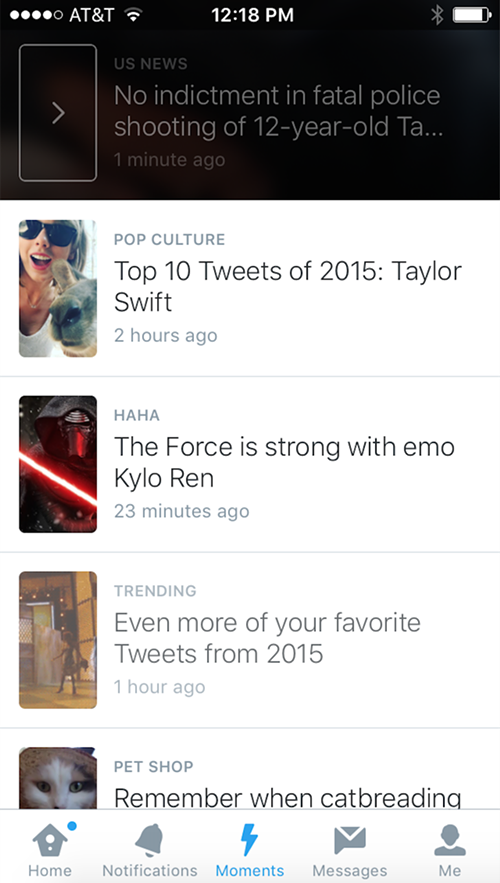 PS: If Moments were just an updated queue of different people singing "Any Moment" from Into the Woods, I'd click on that all day long.