1
I recommend seeing it.

In seeing the body of work of an artist, you get a better sense of what they were trying to say.

Until I saw the grand exhibit at the Palmes de Court in Paris, I never understood really what Picasso was doing, but on seeing all of it together, it just became obvious.

4
Sweet! I'm more interested in seeing this exhibit than in seeing the 'more famous' pieces everybody's already familiar with (or have at least seen in books, if not in person). Looking forward to this.
chrisrnps on February 9, 2010 at 9:15 AM · Report this

5
All the guys would turn the color of the avocado when he rolled down the street in his El Dorado.
Zoroastronomer on February 9, 2010 at 9:23 AM · Report this

He was never _called_ an asshole.

8
Kewl! That IS exciting!

merry on February 9, 2010 at 10:36 AM · Report this
9
The Paris Picasso Museum gives a very good overview of Picasso's career. The press release notes that museum is closed for renovations, so this exhibit sounds like it should do the same (as opposed to being a collection of stuff that they normally wouldn't show). I would definitely plan on seeing it.
Greg Barnes on February 9, 2010 at 10:44 AM · Report this

10
@7 - yes he was. You'd know that if you went to some of the museums.
Will in Seattle on February 9, 2010 at 11:00 AM · Report this
11
The Picasso Museum is one of my favorites. It's wonderful to see his genius attacking other media, like the amazing series of wire sculptures he bent out in just a short time. It's just so....expansive, so wide-ranging, like he just picked up some paperclips one day and fwapfwapfwap, there, these are better than anyone else's, aren't they? They are.

@10, once again, you are wrong, both in your uninformed assertion (which, being uninformed, is wrong even if it's true by accident), and in your assertion that there are clues to his assholishness in "some of the museums". Like the "Palmes de Court" you mention, which do not exist anywhere in the world. "Palmes" isn't even the French word for "palms"; it means "flipper". You are such a fraud.
Fnarf on February 9, 2010 at 11:40 AM · Report this

12
How many ink drawings of spread-eagled hookers will be at this show? Because if I remember correctly there was an entire room at the Paris Picasso museum dedicated to them.
DOUG. on February 9, 2010 at 1:06 PM · Report this 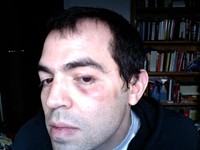 13
He may not have been called an asshole, but he sure loved drawing assholes. I remember going through museums in Barcelona and Paris and being amazed at how many drawings there were of womens' anuses.
Gitai on February 9, 2010 at 2:30 PM · Report this