3
Oh, hell, learn to laugh at yourself a little. Of course it's a caricature, but what, you thought Smokey and the Bandit was a documentary or something?
Fifty-Two-Eighty on March 25, 2010 at 12:55 PM · Report this 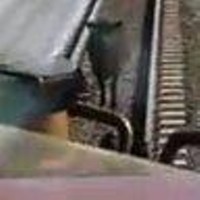 6
If by "pretty bad" you mean "pretty bad-ass". More trannies should carry weapons.

Also, the rapist/assaulter with the hair is pretty much my dream date.
meowmeowkitty on March 25, 2010 at 1:13 PM · Report this

8
The execution may be flawed, but I think the heart is in the right place. Could the use of the term "trannie" be read as a reclaiming of a derogatory term? I think spurring those types of discussions are enough to warrant an inclusion in a film festival. Love it, hate it, discuss it, stick your left foot in (your mouth), shake it all about, that's what that shit is all about.
ZacharyFantastico on March 25, 2010 at 1:23 PM · Report this

9
They probably could have, and probably should have, made this entire film "Ticked Off Drag Queens With Knives" and it'd have been fine. It's problematic and exploitative from a trans perspective, yes, but given that trailer? The very idea that it's about trans women, instead of drag queens, is a little ridiculous.

I wonder how many scenes in the movie reference characters being specifically trans, as opposed to in-drag? Or, to put a firmer finger on it, I wonder how much trouble it would be to simply rebrand the movie as "Ticked Off Drag Queens With Knives?"

12
um, i think it looks awesome. i'll see it!
konstantConsumer on March 25, 2010 at 1:51 PM · Report this
13
I think there should be an approved list of ways to be gay/lesbian/bisexual/transgendered, and that national gay organizations should have approval powers on every form of expression, with some kind of a checklist, and also long drawn-out discussions from every conceivable angle, with special powers being granted to demonstrably crazy, melodramatic, long-winded, or just plain boring voices. Sort of like City Council meetings. Violators, or those who just don't give a rat's ass, should be shunned, and perhaps paraded through a local Wal-Mart with a velvet rope around their necks.
Fnarf on March 25, 2010 at 1:57 PM · Report this

14
I like the idea of Ticked Off Trannies With Knives, movie, but not this one.

I do love in the trailer, right in the middle of the action montage, that totally random shot of a hay ride. (around 2:21)
Explorer on March 25, 2010 at 2:19 PM · Report this
15
I'm in this movie and it's awesome.
GLAAD has flat out lies on their website. they knew about this movie a while ago. they weren't "just alerted." Out of the five leads, 3 are transsexual- and they were cool with everything in this movie other than filming in 110 degree heat in the texas summer. Wigs & Weave get hot.
Ticked-Off Trannies With Knives is Kill Bill for the GLBT set and is scary where it should terrify, funny when there's jokes (about appropriate material) and wham-bam-glam in the action sequences.
on March 25, 2010 at 2:25 PM · Report this

18
OMG, that movie is so bad it's fucking brilliant. They should definitely let it play!!!

And what's with all the over-sensitivity? This movie is playing to a friendly crowd that will recognize the picture for what it is.

Also - I loves me some Erica Andrews. She's one of the Quweens in the film.
PussyDunkinHines on March 25, 2010 at 3:00 PM · Report this
20
I know plenty of transgendered people who use the term tranny, just as I know many homosexuals who use queer and fag, GLAAD need to remember the 1st Amendment.

Done. I'm using it temporarily, but it's all yours. Let me know where to send it.

Ahem, anyway. I would totally see this movie... seems like exactly the right sort of campy, trampy diversion that would go perfectly with 3 or 4 beers and a couple of drunk friends.
Faer on March 25, 2010 at 5:05 PM · Report this
25
I think the claims by GLAAD are ridiculous! Back off! There is not just one type of transgender person, just like there is not just one kind of gay person or lesbian person or bisexual person or straight person. We are all people and individuals! I know personally some of the actresses in this movie, the majority of characters in this movie are transgendered. Just because the movie title has the word "trannies" in it, people are getting all upset. Well, that is word that people of the transgender community encounter daily. I myself, identifty as transsexual and often times use the word tranny to describe myself. I am reclaiming the word. Just as a large majority of people have reclaimed the word "queer". It is time for these people from GLAAD who think that the GLBT community should just look straight so we fit into society, get over themselves and embrace that the world is diverse, the GLBT community is diverse and that if some transgender women want to a movie focusing on violence, they should be allowed to do so. And for the person who said that this movie would be okay if it the title said "drag queens" instead of "trannies". A majority of performers are transgender women who do not identify as a drag queen. Stop trying to force people into boxes...that is how closets are formed. Back the eff up GLAAD and give it a rest.
NoHate on March 25, 2010 at 7:07 PM · Report this

27
Huh. Call me ignorant, but I honestly didn't realize "trannies" was considered derogatory. Live and learn, I suppose.

In any case, the trailer makes it look like a singularly awful movie. I couldn't even really form an opinion about it; flicks that badly made, with trailers trying to be that dramatic, make my eyes glaze over.

Incidentally, I checked out the comments at JMG and the biggest concern there was the use of real-world murder victims' names in the opening sequence. I will agree, personally, that that's in rather poor taste, regardless of any other issues, but it's not like poor taste is out of the norm for a lot of movies, especially indy shock flicks.

Oh, and @9: "Pissed Off" wouldn't be as alliterative. Absolute guarantee the title wouldn't be "...With Knives" if they could have thought of a bad-ass personal weapon that started with the letter "T" (tonfa aren't well known and Taser is copyrighted).
Reverend Tap on March 26, 2010 at 6:47 AM · Report this
28
I don't know. The concept is great but the execution seems to be lacking. I liken this to the band trans band Pepperspray; great idea...terrible music.
bassplayerguy on March 26, 2010 at 8:26 AM · Report this
29
I can't help but wonder...If this movie had been produced by any of the large entertainment companies GLAAD gets money from...what their reaction would be?

The movie doesn't look very good...may even be insulting to trans people. As a gay guy I find "Buck and Henry" and "In and Out" insulting. But, I don't object to them being made or shown.

As I've said before, GLAAD just needs to go away.
roadtripboy on March 26, 2010 at 3:45 PM · Report this
30
I thought the word 'tranny' was just a diminutive of transexual like 'Andy' is a diminutive of Andrew. Annoying but not derogatory.
It looked to me like the film was about empowering yourself and refusing to be a victim, still a valid message to give to the GLBT community. Sadly, it looked like the budget for the project was a twenty dollar bill but just because they weren't able to access Warner Brothers money doesn't mean I won't watch it.
on March 26, 2010 at 5:59 PM · Report this

31
30: A diminutive such as that usually requires that it's an affectionate and familliar term; not so with "tranny". While drag queens and CDers have pretty much embraced "tranny", most transsexual people find it highly offensive. Except usually the younger crowed, in queer spaces, where _other_ trans-people use it. Because ususally when _cis_people say 'tranny" it doesn't mean anything positive.

Anyway, I think the movie will be pretty fierce and campy as sin; but I concur that the use of real victims and describing real crimes is bad taste in the wrong direction! I'd love a movie about ass-kicking Queens....but not one that touts it's self as a TS-geared flick with TG history as it's backdrop.
a.james on March 27, 2010 at 1:37 AM · Report this