1
Points for mixing "ram" with "feathers" giving us loyal readers a nice Muppet Show-type visual.
gloomy gus on August 2, 2010 at 2:38 PM · Report this

2
Now we get to see if they realize that Seattleites are not sheep to be shorn, nor geese to be plucked ... but Citizens who are the Masters and the Council which are the Servants.

4
I speak for the trees. Not for your knees.
Will in Seattle on August 2, 2010 at 3:45 PM · Report this
5
"Several other council members (Conlin, Bagshaw, Godden, and Licata) are then expected to gut those protections by offering watered-down amendments."

Really? Who expects this to happen? Is it Erica C. Barnett, who reported this story on Saturday? And I'm not saying that Erica has been lovely to you, but why not give reporting credit where it's due? (/endrhyme)

6
@5) That's what I heard today talking to several folks at City Hall and sources who have been following this debate.
Dominic Holden on August 2, 2010 at 6:12 PM · Report this

Since re-building the viaduct is going to cost at least 2 billion, I guess we can call it the Billionaires Road.

11
Well hello captain obvious. Everyone is flip floping, some wild crazy bullshit on all sides of the issue. The council, the gov, even the MAYOR is flip floping. Remember, the deep bore plan is a sound plan, with no faults, just as long as the state pays for all the cost overruns. Thats it, thats the only reason were on the verge of going back to the drawing board after 8 years of studies, plans, committees, money money money! All that because of possible cost overruns, otherwise the Mayor couldn't give fifty flying flips about it. It would leave the mayors agenda free and open to peruse the blocking of the 520 Bridge plan.

12
Sound plan with no faults? Contractors are dropping out, the timeline has been pushed back a year, a crumbling viaduct is getting kept open AT LEAST 4 years longer (best case scenario) than originally intended, the tunnel does little more than a surface option (one that was hardly studied, I might add -- they merely modeled the effects of adding two lanes to the waterfront. That's it.), the state is keeping millions of dollars in potential development rights, there is no funding for hazard mitigation in the central city should a large failure happen and the state refuses to tell us exactly how they're going to pay.

14
Again, nobody has any problems with this plan, just as long as the state pays for the overruns. Otherwise, it would not be getting this attention.

Now i'm not saying there are no faults. Clearly there are. I would like to see it connect to 1st ave, but thats not going to happen. Id rather we see I-5 connect to this, but thats not going to happen. Id like think that the soil is 100% safe to drill, but there are going to be hiccups along the way. Im less concerned with this as we have a 20 year old tunnel that was created the same way. We are currently doing the same from convention center to Broadway, then another tunnel to Husky Stadium. Tunnel is not a new concept to Seattle. Its not a perfect plan but it does make Seattle a better city to live in.

But hey, all those design problems, in addition to a number of safety concerns just trying to build the damm thing, but its not a problem as the Mayor is willing to sign off on it, but only if the state pays for any overruns.

As Lewis Black would say "Let me repeat that for you!",

The mayor and his supporters are pushing every worst case scenario with the tunnel plan, be it design, feasibility or safety problems. Anything bad that can happen, will happen if we go with the current plan. But no matter how horrible a portrait supporters paint, the mayor will sign off on it, in a fucking heart beat. They'll be a press conference the next day and he'll happily announce the signing off on the plan, because the state is willing to pay for the overruns. A complete back fliping mega summersault flop!

Do you not remember that part? It was part of his original reason for refusing to sign off on the project. So long as that clause was in the agreement, he would not sign off on it.

It would free his hands to do more important things, like block the building of the 520 bridge!

15
"Nobody"? According to whom, Kinison?

17
If the current city council was up for election in today's primary, it's unlikely most of them would survive. 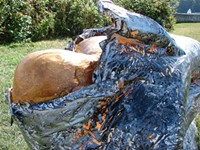 18
Yet again a Stranger writer does not know what passive-aggressive actually means.
King Rat on August 2, 2010 at 10:02 PM · Report this
19
I'm still trying to figure out where this seawall goes. In Phase One it appears it only serves Hanjin Shipping, and relocates utilities. Dominic, do you know more about this? This is my understanding of what's going on (I wrote it).
http://www.redstate.com/hickorystick/201…
Bridgeless in Seattle on August 2, 2010 at 10:12 PM · Report this
20
The economic depression will drag on inexorably, the state and local budget holes will continue to grow like Florida sinkholes, and the politicians will realize that they are throwing their careers away on an indefensible boondoggle. Like all the mammoth development projects that were getting ready to break ground a few years ago, just as the real estate market began to crack, the deep-bore tunnel will be remembered only as the fantastical fever dream of a bygone era.

Next stop, Olympia, time for the entire House that is up to say what they are going to do about cost overruns and transportation funding.

22
Oh come on, the magic funding fairy will make all the billions for the total cost of the Billionaires' Tunnel appear out of nothing.

24
Will, they could put that legislation on any option, for any municipality.
They have a policy problem, and the Speaker of the House and the Governor of the State of Washington are pointing fingers at each other.

If he didn't write it then he can take it out, it's on him.
MrBaker on August 3, 2010 at 7:40 AM · Report this
25
There are 4 main concerns with the AWV replacement project: engineering, environmental impact, risks, and costs LAST.

There are 4 main replacement options for the AWV: cut/cover tunnel, surface/transit, elevated viaduct, and the deep bore tunnel. The deep bore tunnel deserves the last spot in order because it is the worst engineering, the most environmental impact, the most insanely risky, and most expensive.

There is also the consideration of construction disruption, but no avoiding it. The construction process must be managed carefully to minimize disruption and inconvenience. The deep bore tunnel was chosen because it is possible to construct with the least disruption, so long as nothing goes wrong. However, in the long-term, the deep bore tunnel makes surface traffic so much worse, (worse than the surface/transit option), in effect it creates MORE disruption and inconvenience than the other options.

Seattle is continuing its tradition of idiotic transportation planning that is an embarrassment to the engineering community. The DBT, Mercer West and the current design for Alaskan Way are guaranteed to fail. Thank Mayor Mike for opposing WSDOT incompetence and corruption.
Wells on August 3, 2010 at 9:59 AM · Report this
26
It should be noted that the "Mercer West" project, like the DBT, is atrocious engineering. It is not necessary for Mercer Street to be widened to 6-lanes and the Aurora bridge rebuilt, nor is Lower Queen Anne a sensible corridor for thru-traffic from Aurora or I-5 to Elliott. The 1st phase of the Mercer Project looks good, but Mercer West is a hideous mistake.

The current design for Alaskan Way is questionable. Planning for a Wide Plaza Promenade should not go forward under the assumption the design capably manages traffic.

What is the minimal risk people should permit for damage to downtown buildings due to settling in the likely event something goes wrong with the deep bore tunnel during construction and after? Answer: Zero risk should be permitted.

DBT stakewhores are willing to take this risk, but are unwilling to pose and answer that question to everyone else. Admitting the risk is too high is a threat to Seattle's monied interests. The cost overrun issue is a ruse.

Video of Parsons/Brinkerhoff Sept 2007 "stacked" SIX-LANE cut/cover Tunnelite which had tons of political support as late as 2006 -- Chamber of Commerce, Downtown Business Association, environmental and labor organizations saying the same lines about Tunnelite as they now say about the DBT. Where are all these Tunnelite supporters now?

Recently, I reviewed WSDOT's stacked SIX-LANE cut/cover construction process diagram.
They planned to dig a 6-block trench between Spring and Main Streets in the 1st Phase; followed by 2, similarly large trenches to the portals, supposedly competed in 2016.

For excavation alone, it makes more sense to start at the south end and proceed north, returning completed segments to surface use. WSDOT chose the bogus process knowing it would be rejected, just like they chose to study even more expensive and elaborate tunnel designs first, knowing they'd be rejected. Until the voter rejection in 2007, WSDOT had ZERO intent other than to build another elevated viaduct monstrosity. Two years later, WSDOT found an even worse option to champion: the Diabolical DBT.

27
Sure hope you like paying even more for parking downtown.

By the way, add the $5 each way tolls to the cost of the Billionaires Tunnel - and the inevitable $10,000 per household property taxes that - directly or indirectly - every single household in Seattle will pay - renter or homeowner.

And you can forget about sidewalks for the next three decades - or street repairs.
Will in Seattle on August 3, 2010 at 12:17 PM · Report this
28
McGinn’s opposition to the Deep-Bore Tunnel is a ploy to establish himself as Seattle’s decision-maker. After eight months in office, McGinn has one lonely accomplishment: he has divided Seattle’s pro-environment progressives with a lot of help from the Stranger. Why? More at www.lightandair.wordpress.com
David Schraer on August 3, 2010 at 9:46 PM · Report this

that said, it seems there is a large percentage of people in seattle who DO favor a tunnel, and certainly a lot of people outside seattle who do. a tunnel is an attractive option to the council members when it seems the surface option isn't the clear majority favorite.