3
@1: Stan Rumbaugh is running against State Supreme Court Justice Jim Johnson, who is the author of the above-mentioned opinion.

The man I focus on in this post, Justice Richard B. Sanders, signed Johnson's opinion, saying he agreed—or, in supreme court language, concurred—with what Johnson wrote.

The Rumbaugh vs. Johnson race will be decided in the primary because it only has two contenders.

The Sanders race (in which we've endorsed Charlie Wiggins) will be decided in the general because it has three contenders.
Eli Sanders on August 3, 2010 at 10:26 AM · Stranger Staff 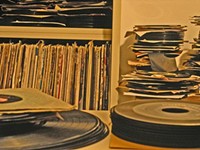 5
He also had no idea that "No Parking" signs out front of the office meant NO PARKING brah, like you cant park your car here mister, don't try or you'll get TOWED, like the sign said...and he was deeply confused and concerned when some cops pointed this out.
nipper on August 3, 2010 at 10:36 AM · Stranger Staff

6
The SHSD (Straight Heterosexual and Sexually Dimorphic) Community supports gay marriage. We have no further comment at this time.
Supreme Ruler Of The Universe on August 3, 2010 at 10:47 AM · Report this

In Sanders' case, though, he has argued consistently for the individual rights of defendants and against the police power of the state. I don't like his opinion on gay marriage, but he's done pretty solid work as a Supreme Court Justice for civil liberties otherwise.
Mr. X on August 3, 2010 at 10:57 AM · Report this

11
"..his fearless defense of freedom"!?! How can people think others are that stupid? How about defense of the oppressive status quo?

In every instance other than the gay rights decision cited, Sanders has done so - and has done so despite the opposition of most of the "liberal" wing of the State Supreme Court. Why do you think prosecutors and establishment Republicans hate him so much?
Mr. X on August 3, 2010 at 1:54 PM · Report this
15
I had the good fortune to grill Justice Sanders on this particular issue on a separate endorsement committee, and I started by reading from the decision, and pointing out that it basically states that gays CAN get married, just to people of the opposite gender.

During that round of questioning, he also stuck to the Vance decision as to why he didn't sign on to the Madsen opinion.

I wish I would have had more time on my panel to do the same line of questioning you were able to do. Good job, SECB.
michaelp on August 3, 2010 at 2:32 PM · Report this

16
next time Eli, let the other person get frustrated. you risk coming off as whiney and annoying, and your subject will just get calmer and more confident because YOU are losing your shit. just suggestin'.
scary tyler moore on August 3, 2010 at 8:08 PM · Report this
17
I don't think that the speacker gave him any room to speack on his behalf! Marriage should be between and Man & a Woman!
on August 6, 2010 at 4:13 PM · Report this
18
I think the stranger is a far left liberal whack site that is sponsored by a bunch of whiney gays who need democrats because they are the party of the weak.
on August 13, 2010 at 10:40 AM · Report this