Brendan Kiley
Back to article

1
Interesting. I don't think it will get people talking about the bad/bordering-on-genocidal treatment of native peoples in the past. People still don't seem to understand how colonialism/taking of native land/residential schools effected (and continue to effect) the lives of native people. In Canada at least, a lot of people would see something like this as "native people complaining again"
KatTheCanuckistan on June 21, 2011 at 1:52 PM Report this

4
I wonder whose photos Fairey ripped-off for these posters.
Fifty-Two-Eighty on June 21, 2011 at 2:04 PM Report this
5
@ 4. Aaron Huey. The collaborator on the project. Or were you trying to be funny?

6
Meanwhile the CBC has a report about how Canada lied about honoring the treaties AND THE NON-EXISTENT TREATIES with First Nation people in BC and elsewhere.

Maybe they hope it won't be noticed in the post-riot hoopla ...
Will in Seattle on June 21, 2011 at 2:28 PM Report this
7
I like the ones wheatpasted right around the corner, underneath the John T Williams memorial painting.

9
@5, right here.
http://www.bing.com/maps/?v=2&cp=46.0638…
SchmuckyTheCat on June 21, 2011 at 2:48 PM Report this
10
Of course there would be high unemployment on those pointless reservations, there's nothing there. If you create a separate sovereign "nation" that needs to be propped up and supported by tax payers all you have are a bunch of eternal welfare dependents with an ethnic chip on their shoulder.
robot ghost on June 21, 2011 at 3:23 PM Report this
11
Yeah, they are the ones "kicking off" the debate... riiiight...

My Great-Great Grandmother was a Cherokee Princess on June 21, 2011 at 3:30 PM Report this

12
@2 can explain the names please? All I get from wiki is that it varies regionally, with Chippewa being more common in the US, Objiwa in Canada. But I want to know more.
More, I Say! on June 21, 2011 at 3:43 PM Report this
13
@10 many nations were forcibly removed from their traditional homes, where they knew how to sustain themselves, and onto the most desolate, barren lands to be found. Look up the Trail of Tears, read and learn.

poenoel on June 21, 2011 at 4:14 PM Report this
18
The traditional recourse when one side breaks a treaty is to resume hostilities. Native Americans looking for redress purely via the courts is like the unions trying to negotiate without recourse to strikes.
tiktok on June 21, 2011 at 4:14 PM Report this
19
@16 I think a lot of this comes from the idea that somehow the Indians owned this land before us. They didn't. They didn't own this land any more than the buffalo did. They were a nomadic stone age culture. They didn't have the wheel or even a written language. The southwest natives were cannibals for god sake. It was a war and your primitive inferior culture lost. Time to get your act together and move on.
robot ghost on June 21, 2011 at 4:22 PM Report this

You are telling me ALL TRIBES WERE NOMADIC before Europeans stumbled across what you now know as America?

Did not have the wheel??? Please tell me what rock you crawled under and I'll lobby your congressional district for increased funding to the educational system in your district.

You're soaking in it. Seattle is home to one of the largest treaty/federal recognition battles in America, with the Duwamish. And has several major treaty rights cases of note-possibly the most high-profile being U.S. v. Washington (commonly known as the Boldt decision).
poenoel on June 21, 2011 at 4:52 PM Report this

And that written Cherokee language was developed from European characters. You can look up that link as well or not.

Not all cultures are equally valid. Aztecs and Mayas had super advanced calendars but also performed human sacrifice and canibalism. All I'm saying is that natives should be grateful every day that whites came here and civilized it.
robot ghost on June 21, 2011 at 5:13 PM Report this
27
So which "white" culture are you from, aptly named ghost robot?

Is it the one that was so civilized that it passed out small pox blankets, because that was kinda uncool. As in, uncivilized.

poenoel on June 21, 2011 at 5:42 PM Report this
28
The question of why some cultures go on to develop technology, and others don't move forward in that way (or in some cases, technologically regress) is an interesting one. I'm not sure it's actually relevant to this issue, though. The fact that a culture is technologically backward doesn't make exploiting it okay.

Listen, Ghost, lots of men have tiny penises. I'm sure you'll learn to get by all the same.

32
I'm pretty sure robot ghost is just trolling. That level of stupidity is not worth engaging.

Orv @28, "technologically backward"? Many of the Europeans who came to Canada would not have survived without native knowledge of the land and rivers. You might want to refresh your understanding of the terms "Imperialism" and "Eurocentrism".
Irena on June 21, 2011 at 8:04 PM Report this

Small wonder. Look at your state map. See the reservations clearly marked? Isn't taught in high school, or on TV, or in the newspapers, or in popular films. INVISIBLE BY CONSENT.

Climate change ... how long before we turn to the real experts for help?
tunanator on June 21, 2011 at 8:08 PM Report this
34
Thanks for posting this!! Posters are going up in Seattle, New York and Los Angeles it's a start. If you like to help hit up the facebook page. There may be art you can buy to help with the cost of doing this. Here is a link to OBEY page for the print. http://obeygiant.com/prints/pine-ridge-w…
sugarbear on June 21, 2011 at 9:03 PM Report this
35
Oh and there is one more artistst Ernesto Yerena he did the little girl and the head dress one here is a story about it in indian country http://indiancountrytodaymedianetwork.co…

There is a tumbir page for it http://honorthetreaties.tumblr.com/

and here is the emphas.is page for it http://www.emphas.is/web/guest/discoverp…

sugarbear on June 21, 2011 at 9:28 PM Report this
36
Activist Artist Ernesto Yerena collaborated on 2 of those posters with me. Check him out at www.hechoconganas.com

-Aaron Huey
aaronhuey on June 21, 2011 at 9:29 PM Report this
37
and here is the video about the Pine Ridge Billboard Project 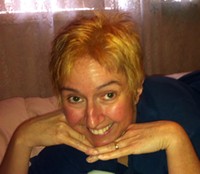 I helped coordinate a ceremony between the nonprofit who operates the Lady Washington tall ship and local area Natives.

The white operators of the Lady Washington SPECIFICALLY sought to symbolically apologize for the fact (you know, FACTS) that the original Lady Washington deliberately distributed small-pox infested blankets to local area tribes.

They wanted to acknowledge and make what amends they could in the face of the devastation that followed.

I was lucky enough to not only help coordinate participation with the City of Seattle and the Blue Heron canoe family, but to be a passenger aboard the Lady Washington as it rode through the docks and to Lake Union where it was met by the Blue Heron canoe, which circled the ship 3 times counter-clockwise (a symbol of turning back time) and boarded to exchange gifts and words of kindness.

Unfortunate that not everyone can be that open-minded and gracious. Or up on their history. Take a moment to get educated before you start hating.

43
i should try to walk by there before they all get pasted over.
Simone on June 23, 2011 at 1:24 AM Report this
44
Hey Robot Ghost, not all tribes were nomadic in the sense I believe you might be thinking. Here on the NW coast tribes lived in longhouses, the walls and roofs of which could be transported from summer to winter villages where permanent base structures were erected.
They don't live backwards with regard to technology in any sense. I've never seen a native person wearing cedar clothing, or living in a long house, or in tipis.
And they did own the land, as well as the buffalo on it. Here on the NW coast heads of lineages owned the rights to land and the resources on it. Sometimes they would share with others to provide and thereby gaining prominence. Ownership of land can be learned of if you read about the function of placenames and oral history. I say history because that's what it is, the human mind is much better at remembering oral narrative, because it invokes emotion, than it is at remembering written word which does not emote.

You are super right about one thing you've written though. Many reservations are pointless where there is nothing to sustain a population on or build industry around, and for that reason many reservations are welfare states.
However, there are others, specifically here on the NW coast, which are very valuable for bottom fishing, halibut fishing, salmon and steelhead of course, and for forest resources. You see, it's here where the settler government couldn't push tribes any further away from white settlers. So Isaac Stevens let many tribes choose their land, and the treaties gave access to their traditional and accustomed hunting and gathering land.

45
224, no, i mean someone fron pine ridge, who can tell us about the place, please.
scary tyler moore on June 24, 2011 at 7:24 AM Report this
46
I'm sorry, but what does it matter whether the native tribal groups were nomadic or not, advanced or not?

They lost in war. Period. Or are you going to re-draw the map of Europe to reflect political reality in 1492 as well? Africa? Asia? The principle that we somehow now are responsible for the acts of our distant forebears is idiotic, but if you're going to hold to it, at least do so consistently.

Yes, we should re-negotiate the treaties. Want a reservation? Get a passport and a work visa to travel to or work within the United States. No more dual citizenship. Forgo all federal or state funding or assistance from the United States. Find a way to maintain infrastructure and education and all the other requirements of government without the financial assistance of the US. In other words, if you're going to call yourself a nation, accept the duties of nationhood.

But they, like most of the whiny left, want it both ways. They would never want to forgo their victim status, because then they'd have to start taking responsibility for their own lives.

I realize in your all consuming hatred of America and everything it stands for this may be difficult to understand, but I don't think genocide means what you think it does.

A truly tragic series of epidemics happened in the Americas affecting native populations. Estimates of population loss vary but around 90% is generally conceded over roughly 2 centuries from first contact with Europeans. For purposes of comparison Bubonic plague had mortality rates that averaged around 30%.

Neither side had a good grasp of disease causes and prevention. Additionally, genetic diversity was remarkably low in the Americas, so what caused tragic results in the Southwest might be equally virulent in the far Northwest or in what would become Chile or Brazil. This lack of genetic diversity is considered by recent scholarship to be a major reason for the extremely high mortality rates experienced. A good balanced view can be had by reading '1492' which just cites historically verifiable facts, not Naomi Klein type lies pretending to be scholarship.