Why Does Anyone Listen to James Carville?

2
I have precious little use for James Carville. Always have. However, he might be onto something with that "panic" thing.
Fifty-Two-Eighty on September 15, 2011 at 10:38 AM · Report this
3
You neglect to mention that he is married to opportunistic Republican POS Mary Matalin. Their two daughters are rumored to have co-starred in the well-known Two Girls/One Cup video, thereby raising the family's reputation and stature to previously unachievable heights.
Smartypants on September 15, 2011 at 10:39 AM · Report this

And how exactly was Billygoat elected? By a minority of voters since the majority voted for Bush and Ross Perot. Then Billygoat was reelected when they ran "Viagra" Bob Dole against him --- like who couldn't win against Bob Dole???

Sound familiar?? I mean, which nutcase will be running against President Obama, after all?

That would be the same president who has done everything for the republiCONS and Wall Street? Whose VP, Joey bin Biden has some choice pro-China comments on their saving our economy, while they routinely disappear people there -- and in Bahrain -- and eventually probably in the USA, a likely scenario given those "preemptively arrested" activists, which Obama has now exceed even Bush's number of arrests!

10
"Why do news shows hire an "expert" who is almost always wrong?" Why is One and a Half Men still on the air? Why has no one commented on how odd Lindsey Lohan's upper lip always looks? Why didn't Gandalf give the ring to the eagle and just have him fly to Orodruin? There is never an easy answer to these unnerving questions. Carville is probably just glad he's pissing you (and a lot of other people) off... and no, I am not a Carville fan.
straightmangay on September 15, 2011 at 11:08 AM · Report this
11
Working in a shoe store? No. No! A thousand times no!

James Carville must play Lex Luthor in a live action Superman at some point before I die.

This needs to happen and I have several piggy banks of pennies I've collected in my quest to make the world just that much better.
on September 15, 2011 at 11:08 AM · Report this

Carville is easily the most useless and obnoxious democrat in the entire country... which is probably exactly why CNN keeps putting him on the air.

13
Glad to see someone calling this POS a POS.
seatackled on September 15, 2011 at 11:21 AM · Report this
14
Just replace James 'Carville' with 'Paul Constant' and... yep. Right there with you. 'Paul Constant is an opportunistic piece of shit.'

Sure there is. The media likes to push narratives. The media does not exist to be right. The media hires multiple experts to be wrong, because that's what they want to sell to the advertisers, backers, and corporate interests.

22
@17 Actually, I think the media just grabs an idiot and shoves him/her in front of the camera as fast as they can. I doubt the expert's (in)credibility factors into it at all. Brazil has an earthquake at 4:30 p.m. BOOM! CBS has a seismology "expert" on the 5 o'clock news spewing a bunch of gibberish about earthquake safety and advising us to go to the CBS website to learn how to strap down our water heaters. These days, when you're competing with (unreal) reality TV, you gotta be quick!
straightmangay on September 15, 2011 at 12:04 PM · Report this
23
His wife is great though.
raindrop on September 15, 2011 at 12:08 PM · Report this
24
@23: You sure you're not confusing her with Marlee Matlin? Because Carville and his wife are opportunistic scum-suckers. Carville is a Democrat so long as he gets paid to be one. Same with Arianna Huffington, but in Carville's defense, he's at least a ton smarter than Huff.
undead ayn rand on September 15, 2011 at 12:11 PM · Report this
25
@12

Given the competition, that's a Herculean task.

1. Fire somebody. No -- fire a lot of people. This may be news to you but this is not going well. For precedent, see Russian Army 64th division at Stalingrad.

2. Indict people. There are certain people in American finance who haven't been held responsible for utterly ruining the economic fabric of our country. Demand from the attorney general a clear status of the state of investigation concerning these extraordinary injustices imposed upon the American people. I know Attorney General Eric Holder is a close friend of yours, but if his explanations aren't good, fire him too.

3. Make a case like a Democrat. While we are going along with the Republican austerity garbage, who is making the case against it? It's not the Democrats!

4. Hold fast to an explanation. Stick to your rationale for what has happened and what is going to happen under your leadership. You must carry this through until the election (never say that things are improving because evidently they are not).

The course we are on is not working. The hour is late, and the need is great. Fire. Indict. Fight.

Really, who can disagree with those points?
Pol Pot on September 15, 2011 at 12:19 PM · Report this
28
@24, it's Mary Matalin - a Republican stratagist who served as an advisor to George W. Bush and Dick Cheney. I've seen her and James speak together and it's very entertaining.
raindrop on September 15, 2011 at 12:23 PM · Report this
29
I know who she is, I just have a hard time watching them speak without feeling the urge to punch.

Did Boogie Man not make you filled with rage?

I mean, I'm sure they (as with plenty of conservative/lib opportunists) are nice people IRL but I have a very hard time separating someone's persona from their everyday lives.
undead ayn rand on September 15, 2011 at 12:29 PM · Report this
30
@26 & @10 Gandalf didn't give the ring to the eagles because even Thorondor could not have crossed into the seat of Sauron's power without being set upon by the agents of darkness. Whether or not the Nazgul were riding them, there were still Fell Beasts at the command of the Dark Lord. Not to mention, the eagles are not Gandalf's servants, nor are they particularly friends either of the first born or men. They have their own agenda. That they aided Gandalf in his time of need is a tribute to his centuries of of demonstrating his goals aligned with theirs, the service he'd rendered to them, and the bonds of friendship they shared.
usagi on September 15, 2011 at 12:51 PM · Report this

31
@26 Yes, my sister and I thought the (solitary, very thin) book could have been called The Bird of the Ring. Not such a great title, eh?

@28 Every time I see her name come up I keep reading it as Mary Magdalene for some reason--spooky!
straightmangay on September 15, 2011 at 12:52 PM · Report this

33
Really? No similarities to what the other "side's" reporters and book writers are doing? None at all ... no one can see that it's the same tactics on both sides?

Us Versus Them era.
KittenKoder on September 15, 2011 at 1:13 PM · Report this
34
@33: We're stating exactly that, KittenKoder. Carville and Matalin are both doing the same role, using the same tactics, while crassly, they're very successful.

This criticism is entirely applicable to "both sides".
undead ayn rand on September 15, 2011 at 1:26 PM · Report this

35
Cajun-style!
T on September 15, 2011 at 1:26 PM · Report this
36
I'm with Grrr @5. James Carville's greatest contribution to humanity is providing the fodder for Bill Hader's brilliantly creepy, deeply disturbing impersonation on Saturday Night Live. The bit where he riffs on having been raised by eels--I've rarely laughed harder.

39
I can't believe people still watch TV at all, but meh.

@34 Aaah, yes, I typed my soapbox stance a touch too quick there, trigger finger still a bit twitchy. I was focusing on some of the one liners too much.
KittenKoder on September 15, 2011 at 2:02 PM · Report this
40
@30 & @31: Also, Tolkien took a lot of trouble establishing that the strength of character that allowed Frodo to resist the temptation of the Ring was his defining feature. Gandalf determined that he had to be the ring-bearer because only he could be counted on to resist its control.
Proteus on September 15, 2011 at 2:08 PM · Report this

41
@30 You fucking rock.
OuterCow on September 15, 2011 at 2:09 PM · Report this
42
@39: Right, right. I don't think you'll find too many people in the PNW disagreeing with you on TV's uselessness or the left-right dichotomy. Mostly I'm annoyed with these long-time politicians for when I *did* pay attention to TV news and for their continued influence in our political system.

It'll take a while for our current media to fall apart, the system is already weakening, but I'm not entirely sure that what's replacing it will be that great either.
undead ayn rand on September 15, 2011 at 2:33 PM · Report this
43
@30 and @40, The question of the eagles never really bugged me, but I wondered about it. No more, thanks to you. Your geekery is much appreciated. Tonight, I sleep the deep sleep of the nerds.
LJM on September 15, 2011 at 3:17 PM · Report this

44
It's no coincidence that Carville is Cajun. Look at the man - he's clearly at least a quarter alligator. That is the face of a reptile.

45
@30 - Holy shit, I'm handing my nerd card in. I am a dilettante.
Geni on September 15, 2011 at 4:51 PM · Report this
46
I've met the man and broken bread with him and Mary. The guy is a flat out genius with an encyclopedic mind and a love of country you morons can never hold a candle to.
You think he's crazy - great - fight crazy with crazy. He's the lone voice, with no vested interest other than as a patriot, who shouts out what pansy pols only whisper. Forget the details about how and who and when POTUS should panic, fire, whatever. Clearly the GOP needs neither truth nor facts and look where they are - not too far from controlling the country and with whom: a nutjob religious zealot who wouldn't know a fact if if hit her in the face; a businessman who actively decsontructed companies making millions for himself at the expense of all those who were 'right-sized', or a really dangerous, self-inflated megalomaniac - a graft loving, pay to play criminal who in earlier times would be tarred and feathered, if not hung.

48
I love it when Paul gets feisty!

I thought Dan had written this piece until I saw the byline...all these years of writing next to bitchy gay men have paid off...Paul has gotten claws, and they're JUNGLE RED!

49
Oh, come on. Carville is bush league compared to David Gergen, the other CNN darling, who goes back to Nixon.
MichaelPgh on September 15, 2011 at 8:54 PM · Report this
50
Paul,
If you lost some weight, you wouldn't be so angry. 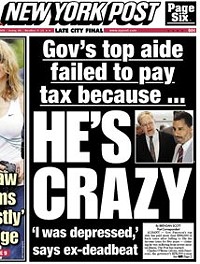 51
"[H]e faces zero accountability for his irresponsible excuse for punditry. Why do news shows hire an 'expert' who is almost always wrong?"

Sez the guy who led the charge against the tunnel . . . .

When you write "Billygoat" or ""Viagra" Bob Dole" or "republiCONS," this is what people think of you.

(I'll not bother to comment on multiple exclamation points or question marks.)

MICRO$HAFT, DUMMYCRATS, OBUMMER, FAUX SNOOSE, AMERIKKKA, those are just juvenile and rolleyesworthy. But sgt_doom doesn't have much to offer but warmed-over Alex Jonesisms, so I suppose getting rid of them wouldn't make his posts any more insightful. I suppose I'd be more disappointed if someone used those and had interesting opinions.
undead ayn rand on September 16, 2011 at 11:06 AM · Report this
59
@52 - Hilarious! I know I wouldn't give him the ring, I am having a hard enough time trusting him with the football, but go Philly!
littleredridingindahood on September 16, 2011 at 1:19 PM · Report this