The Gay Debate: The Bible and Homosexuality 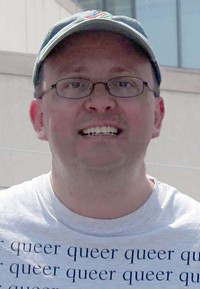 104
@102: Lot's offering up his daughters to be raped seems like less of a "big sacrifice" than Lot's offering himself up would have been.
dlauri on April 1, 2012 at 12:31 PM · Report this
105
In 2012, why are people still considering the legitimacy of mythology?
joemomma on April 2, 2012 at 10:59 AM · Report this
106
@104, but if you remember the price placed on virginity in those days... Lot was basically offering to make his daughters unmarriable. And should they get pregnant, their children would be shamed for generations -- i.e., Lot's very grandchildren, part of his family line, would be spoiled. He was giving up part of his descendance. Presumably, this would be a bigger sacrifice than sacrificing himself (which in principle everybody swears to do for their king or leader, right?).

It's our ethics of today, in which we think it is better to offer ourselves as target of harm than to let harm happen to others (especially family members whom we love), that would justify your judgment. And this ethics has a strong Christian leaning to it. On the basis of his system, I could imagine Jesus agreeing with you that Lot should have sacrificed himself rather than his daughters, but he was clearly ahead of his time in that respect.
ankylosaur on April 2, 2012 at 12:53 PM · Report this
107
"...You're going to want to send this link to friends and family members who insist that being gay is a sin" - not if those happen to be Jewish friends and family, because Vines gives scriptural support to the idea that the old testament genuinely proscribes homosexuality (it's just that - her argues - these parts of the old testament don't apply to Christians anymore). And non-monogamists remain scorned.

I hope that Vines' biblical scholarship produces a more tolerant Christian church, but there's a narrowness in looking for strict scriptural support that means that certain divisions aren't as much erased as displaced - now along old/new testament or faithful/unfaithful lines instead of gay/straight ones (which has obvious unifying effects within christian populations, but possibly less unifying ones outside of it).
on April 9, 2012 at 11:13 AM · Report this
108
I have been a Christain Pastor myself for some time. I have always had a difficult time preaching against men or women who naturally love the same sex, because of those 6 scriptures looked at. This young man has done a wonderful job presenting an understanding of what those scriptures really meant, based on the context. I now believe all Christains need to be open-minded and listen to this and change how we look at those who are gay. I know I will.
pastorscott on May 8, 2012 at 3:11 PM · Report this
109
It's not right at all. It's not judgmental either. Just typical society trying to change views like how they always will. I say it's wrong, but who are you to say its right??
on November 26, 2012 at 12:57 PM · Report this
110
Thank you, thank you so much Matthew.

It must have took so much time to sort all this out. But I think you did something amazing for the whole Christian community, Not only the gay people are blessed with this video, all Christians are. They need to know some things aren't what they think, sometimes the Bible is meant different and someone has to step up to find out the real meaning.

A long time ago I accepted I am gay, but I coundn't tell my Christian family, because of that 6 phrases. Now I think I can tell them, because I know that even the Bible is on my side, so why wouldn't my family be?
Moppie on December 15, 2013 at 11:21 AM · Report this