Let's All Learn About Paul Ryan Together

1
Conservative candidate who revs up the conservative base and makes moderates, independents and liberals cringe. The GOP does know Obama's pretty good at countering this move already right?
That said I can't think of a whiter ticket, and while it's not entirely that they're just white, it's that they're white and rich. It's not even that they're just super white and super rich, they're also super pro-millionaire. What possible reason could anyone in their 20's who isn't a millionaire already want with this ticket? They're anti-gay. They're anti-women. They're pro-religion. I don't think Romney really wants to win.
watchout5 on August 11, 2012 at 1:54 AM · Report this
2
Didn't the Dems in congress play a game of chicken with the Ryan budget a while back, forcing the GOP to back off a bit?
Joe Glibmoron on August 11, 2012 at 2:06 AM · Report this 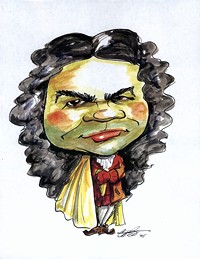 6
This is a smart, smart, move on the part of the Regressives. It won't convert many so-called independents, but it is a Hymn of Love to the right-wing. Down here in the Deep South, people are voting to remove B. Hussein Obama, come Mormon or high-water. They are energized and can't wait for the 87 days to run out until November so that they can sprint, not stroll, to the polling stations. Mitt makes them spit, but P.D. makes them smile. Even Ryan's RCism won't matter. BXVI has been placing conservative Bishops around the country, from Seattle to Savannah. The local diocese just held a 'values rally' in Savannah's Forsyth Park. Ryan will help to remove much of the 'meh' factor over Weathervane Willard. He will, of necessity, move the conversation back to economics.

Nate Silver is right--this is going to be a very close election.
Laurence Ballard on August 11, 2012 at 5:24 AM · Report this
7
Ryan is pure gold for the Right.

8
Neither of these men has any ability to feel compassion, sympathy, empathy, or even pity. They're totally remorseless and would ruin countless millions of lives without a second thought. It's a Reich-wing dream ticket straight from hell.

Original Andrew on August 11, 2012 at 8:14 AM · Report this
9
Of course, the most important strike against him as far as the Stranger is concerned is that he has an Anglo sounding name and he doesn't put his penis in places that are meant for pooping.
Stranger'sWorstNightmare on August 11, 2012 at 8:28 AM · Report this
10
Nate Silver is right--this is going to be a very close election.

Nate Silver is usually right. And as of today, he's saying there's a 72.0% chance of Obama winning with 301.1 electoral votes. That's not what most folks consider "close."

11
Huh. When you wrote about Paul Ryan being a possible running mate, Paul, I dismissed it out of hand. I thought it would be a terrible choice. It's red meat to the right, of course, but I think Ryan is a negative among centrist or independent voters. I don't see how this help Rmoney in any of the critical swing states. I guess it will make the teabaggers happy, I suppose, and it wasn't as crazy as McCain's pick of Sarah Palin, but I really don't see how this helps him.
Reverse Polarity on August 11, 2012 at 9:14 AM · Report this

There's more to it than the charts. Read his Thursday analysis:

13
I don't know. I think this was a pretty smart move. He's attractive to young republicans and tea party fellas, both demographics that are luke-warm, at best, for Romney. He's bright eyed and well spoken, countering the growing image of Republicans as dim. The rabid Ron Paul Youth seem to like him, and they're a very... resourceful bunch. He knows that N. and S. Korea are two different countries. I can see this being very good for his campaign.
Michael of the Green on August 11, 2012 at 10:15 AM · Report this