What He Said: Barney Frank on Mitt Romney

1
He's becoming a fine twitterer as he nears his happy married retirement!
gloomy gus on September 18, 2012 at 2:50 PM · Report this 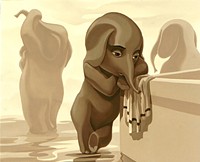 2
overheard: "The Romney campaign is so dead the Mormon church just baptized it."
Matthew Richter on September 18, 2012 at 2:52 PM · Report this
3
Maybe if the companies Mitt took over/founded/sat on boards of paid their entry level workers a livable wage, they'd make enough money to need to pay taxes. I mean, either you pay "entitlements" so that they can afford rent and food while working 40/week to ring up post it notes, or you can pay them what they can actually survive on, instead of stuffing it in the pockets of your investors and yourself. Then they have enough money to buy other things. See how that works?
MinnySota on September 18, 2012 at 3:03 PM · Report this

4
A-fucking-men.
Gurldoggie on September 18, 2012 at 3:04 PM · Report this
5
Perhaps the most stupid thing in this steaming pile of stupid: the topic to shifts back to "Exactly how much have you been paying in taxes, Mr. Romney?" and won't go away until he releases the returns. It can't. He's painted himself into a corner.

Above anything else, the last few days have demonstrated that Romney is not qualified to be President.
usagi on September 18, 2012 at 3:05 PM · Report this
6
Like Paul Krugman said yesterday: the vast majority of the adults who don't pay income tax are either elderly, students, or cyclically unemployed. Meaning: they either paid income taxes in the past or will in the future. They're not grifters and suggesting that they are is grotesque.
I have always been... east coaster on September 18, 2012 at 3:21 PM · Report this

7
That whooshing sound you hear... is what's left of the Rmoney campaign going swirlingly down the toilet...

9
Gonna miss Barney, but he certainly deserves a good retirement.

Here's the thing about the Romney faux pas: He said that shit at a fundraiser, so we can deduce, I think, he thought that it was something his supporters (with money) wanted to hear. Therein lies the malignancy in America. We've become a country of the Haves and Have Nots to a degree that I certainly don't ever recall in my lifetime, and the Haves blame the Have Nots for not having. This is more than the "rational self-interest" egoism of Ayn Rand. This is mean, despotic aristocracy just a shade or two above proposing a final solution. Let the poor, useless motherfuckers starve, it says. They deserve it.
Bauhaus I on September 18, 2012 at 3:51 PM · Report this

10
If the Repubs get to keep using Obama's comment (also made at a fundraiser) about Republicans -- or rednecks, or whatever group it was -- clinging to their guns & religion, then we get to keep using this.
this guy I know in Spokane on September 18, 2012 at 4:39 PM · Report this
11
Yes, the difference however is the guns and religion comment was mostly correct, albeit insensitive.
wxPDX on September 18, 2012 at 8:13 PM · Report this

One of your most Ardent FanBoys

claims to have found a secret recording of you from 2006

in which you endorse legalizing Polygamy.

He has even posted a transcript
(on Slog, for crying out loud.
Punked on your on blog!
damn- the internets are a jungle....)

"I have the same reaction to legalizing marriage for gays as I do for polygamists. What’s the big deal? Legalize it. It’s kind of like arguing against giving women the vote because then women will want to enter the work force. (Horrors!)"-Dan Savage

Here's the quote in full. Obama was actually speaking in sympathy for those people and goes on to say that he needs to court their votes. HUGE difference in both the tone and the attitude of what Romney said

And it's not surprising then they get bitter, they cling to guns or religion or antipathy toward people who aren't like them or anti-immigrant sentiment or anti-trade sentiment as a way to explain their frustrations."