What Makes Randy's, the 24-Hour Diner South of Boeing Field, Worth the Trip

Why don't more people know about this place? It's a classic, a rare island of unfussiness in a sea of increasingly froofy restaurants. Nick DePaolo

Despite having a near-perfect chicken fried steak, the food at Randy's isn't much different from IHOP or Denny's, both of which exist within the boundaries of Seattle. As for other round-the-clock diner food options, I could always visit Lost Lake, the Square Knot, or the 5 Point, just to name a few. But I'm hooked on Randy's, and I can only invoke the nebulous concept of "charm" to explain why.

Plus, again, the chicken fried steak, which is formed and breaded in-house and liberally drenched with a hearty but not overly thick country gravy, with assertive chunks of pork sausage. But everything evolving around that chicken fried steak is wonderful as well. You see, Randy's has a serious theme going.

Dozens of model airplanes are suspended from the ceiling, and no, it's not because some "director of vibe" went to a thrift store and bought up a bunch of decor. Nick DePaolo

The menu has tiny clipart airplanes on it, along with hamburgers and steaks. I would find this extremely annoying if it were intended to be ironic, but it's not. The chefs wear floppy chefs hats and neckerchiefs with airplanes print on them. Dozens of model planes are suspended from the ceiling, filling the airspace with a veritable fleet of bombers, fighters, and even a wooden biplane. Aviation memorabilia covers every available surface that is not for sitting on or eating off of. There are pieces of actual airplanes that flew actual missions dividing a couple booths. And above it all: a plush bald eagle keeping watch. In the age of perfectly designed concept restaurants, it is refreshing to immerse oneself in such a guileless approach to restaurant decor. There is no "director of vibe" at Randy's. No one went out to vintage markets and hobby stores to create the "perfect" look.

According to Luccia, who owns Randy's with her husband Richard, the plane theme began when one of their regulars asked if he could bring in a model plane he'd completed because he was tired of it sitting around his living room. The customers might enjoy it, he thought. From there, the collection expanded over the years—Randy's has been under its current ownership since 1981—with more contributions from other patrons and friends, co-owner Richard, and Lloyd, the instigator and the man responsible for the epic wooden biplane. None of this is very surprising, given the diner's proximity to Boeing field, but it is certainly part of why I like Randy's so much. Its kitsch is wholly organic. The booths—with alternating seats in bright orange and neon pink—are obvious holdovers from the seventies, not yet in need of replacement thanks to cleverly spray-painted strips of duct tape. The overall atmosphere is one of worn-in comfort, right down to the plentifully buttered hash browns. 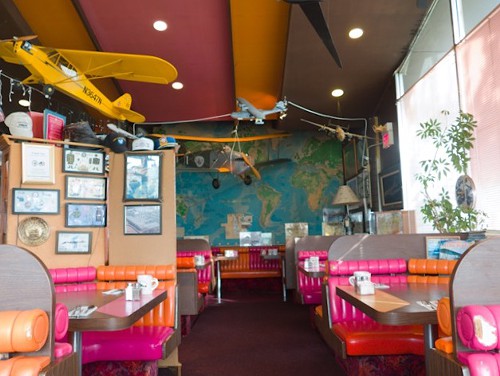 And the service is as straight-shootin' and self-assured as the place itself. My friend Nick, who introduced me to Randy's one hungover morning long ago, is notorious for being an annoying diner. As a member of the service industry, I constantly cringe at his antics. Out of some sense of loyalty to his having introduced me to Randy's orginally, I decided—against my better judgment—to bring him to Randy's with me when I visited to do a little research/day drinking. Despite Nick's strange delight in making a nuisance of himself, Ray, our server, was unruffled and perhaps even a little amused. After enduring, in short succession, a request to turn on the bathroom heater; a request to move to a larger table despite our small party; a treatise on how the B-52 buffalo burger used to be way cheaper (delivered despite the fact that I was paying and Nick would be ordering it regardless); and an insistent need to have an unavailable side of pineapple added to his burger, our server Ray was unfazed. He laughingly offered me a booster seat for my friend and, upon checking Nick's ID and discovering that he had something of a pompadour in the photo, informed him that if he, "tried hard enough he could look like...which one was it, Beavis or Butthead?"

He then continued to wait pleasantly and attentively on us, with no trace of the smoldering resentment I would expect from your average server confronted with such a vexing litany of requests and "observations." Nick and Ray's banter, the greasy but satisfying food, the bizarre and eclectic decor, and the prevailing unpretentiousness, taken together, make Randy's more than a sum of its parts. Why don't more people know about this place? It is a Seattle classic, a rare island of unfussiness in a sea of increasingly froofy restaurants. And, given the complete lack of non-Boeing foot traffic in the area, it will likely be protected from the shockwave of gentrification emanating from the city core. While I don't mind $17 salmon roe benedicts and I'm perfectly tolerant of the people who can afford to eat them, sometimes it gets to be a little much. For those times, I hope there will always be Randy's.