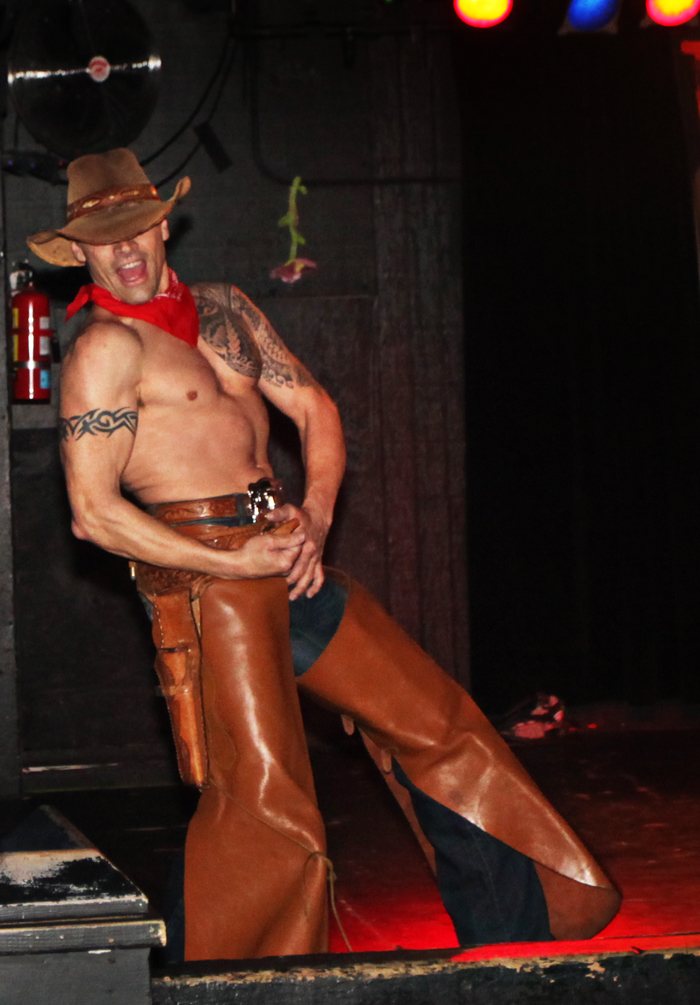 This li'l buckeroo came onto the stage to the song "Wild Wild West" by Will Smith. Kelly O
Sponsored

Last weekend, we went to a male strip show. At El Corazón. Let that sink in for a second. The Ultimate Males "Sex You Down Tour" was advertised as A LADIES NIGHT FOR LADIES—aka the kind of strip show men are not encouraged to attend. Here's the scene: 25 to 30 women, many with tanning-bed tans, Ed Hardy garments, and big stacks of dollar bills fanned out of their bras, gathered in the show room. A way-too-loud stripper hype man (he was a hype man for the strippers, not a stripper himself) greeted the audience with "If you get poked in the eye with penis, you cannot sue the club!" Noted. We didn't know exactly what to expect, but I can now safely say that this was the jankiest male stripper revue we've ever seen—at at El Corazón or anywhere else. The pictures below tell the whole story:

The rest of the evening offered what this outfit of strippers (if you can even call them that) thought a woman would want from this sort of event: rampant boob grabbing (by all four strippers and their hype man), "costumes" that were basically modified waiter's outfits (black baggy chinos, black button-up shirt, COWBOY HAT), identical thongs, plenty of boxer-brief, and, as one woman in the bathroom eloquently put it: ZERO DICK. Audience interaction made up a good 80 percent of the show—women were either led onstage and "treated" to lap dances on ripped-up El Corazón chairs, or the men came to you. No one was safe. Though we had no dollars to spare on tips and made strategic runs (literally running) to the bathroom every time a stripper drew near, the sheer emptiness of the room guaranteed that they'd get to us eventually. And eventually they did. We were each straddled by a petite man in boxer briefs and tight tank who attempted to kiss our necks, place our hands on his abs, and ignore our shrieking laughter.

Two of the (four) dancers had tattoos that could be categorized as "tribal." Kelly O

By now, I'm sure there's only one question on your mind: How long did this male strip show go on before they played Crazy Town's "Butterfly"t? The answer is: one hour. It took nearly two hours for one of the stippers to bust out the one and only backflip of the show. Other songs included Macklemore's "Thrift Shop," Imagine Dragons' "Radioactive," and George Thorogood's "Bad to the Bone." At one point, someone was literally stripping to Skrillex using the sticker-covered pole in the middle of the El Corazón stage. So far, it hasn't been an easy image to erase. You're welcome. 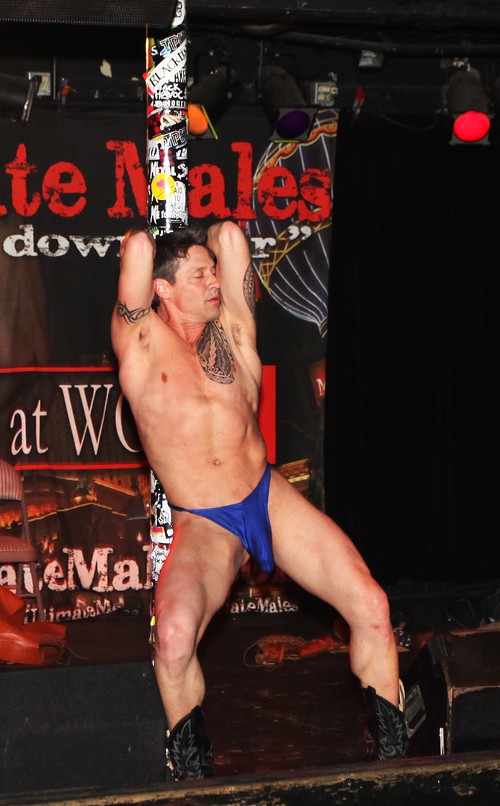 I just like to imagine him in the store saying, "I love this one, but does it come in blue?" Kelly O 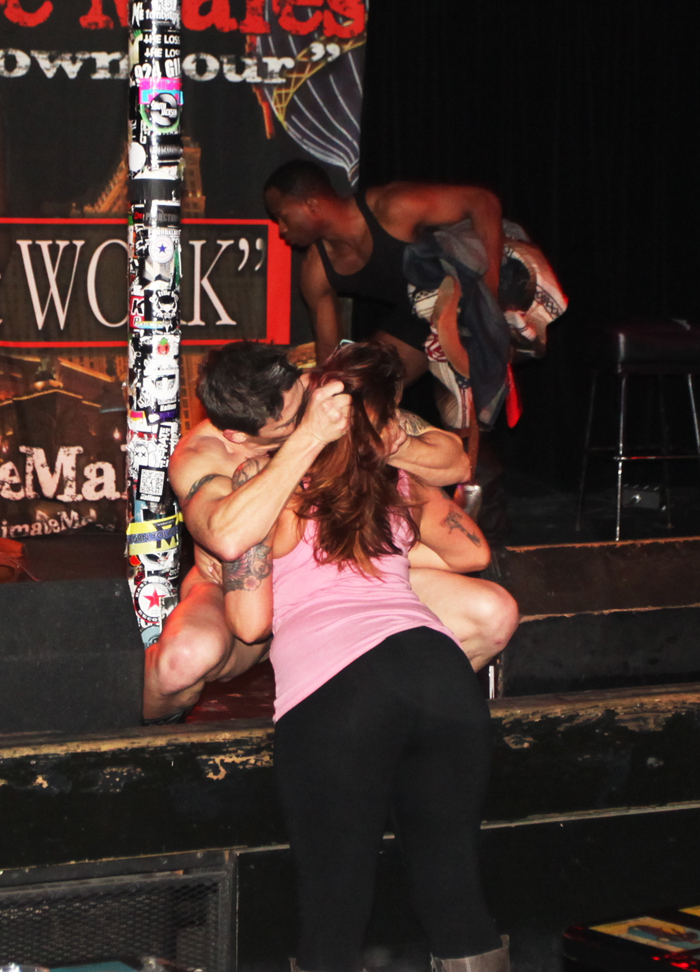 "Please, for the love of merciful Jesus Christ: Will you please take me home with you?" Kelly O 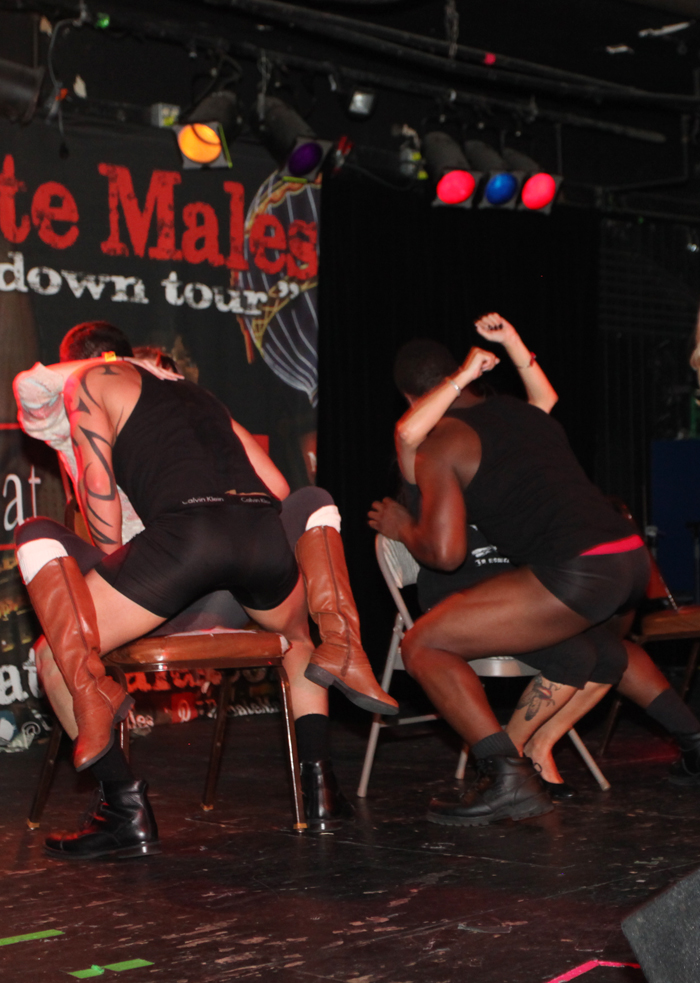 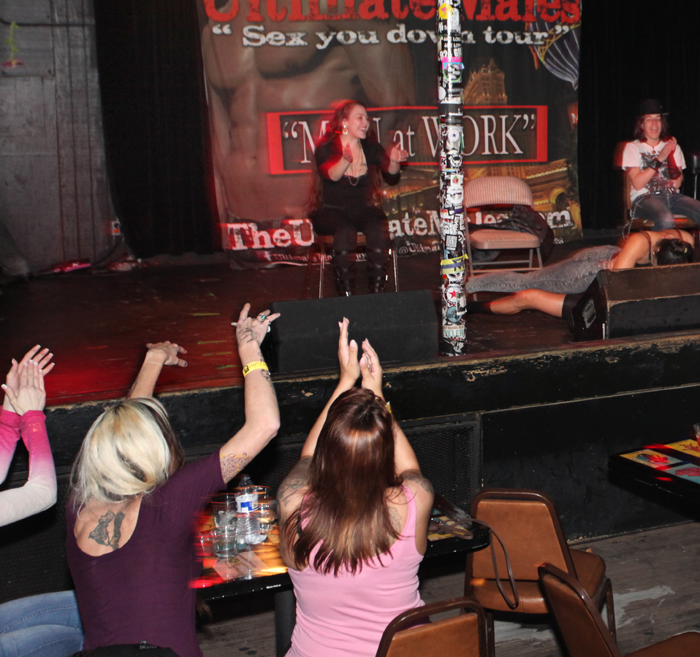 Highlight: A woman FLIPPED a dancer onto his back and started grinding him into the stage. Kelly O 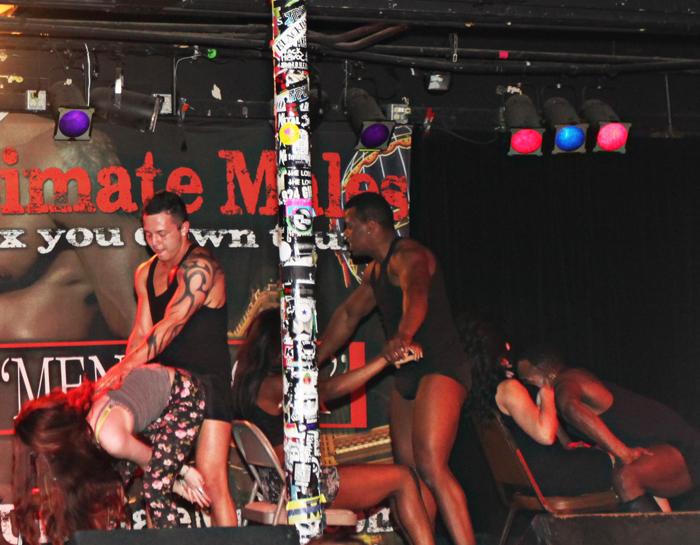 "I mean, the job description says 'male stripper,' but we mostly just dry hump and motorboat women for $2-$3. It's totally chill." Kelly O 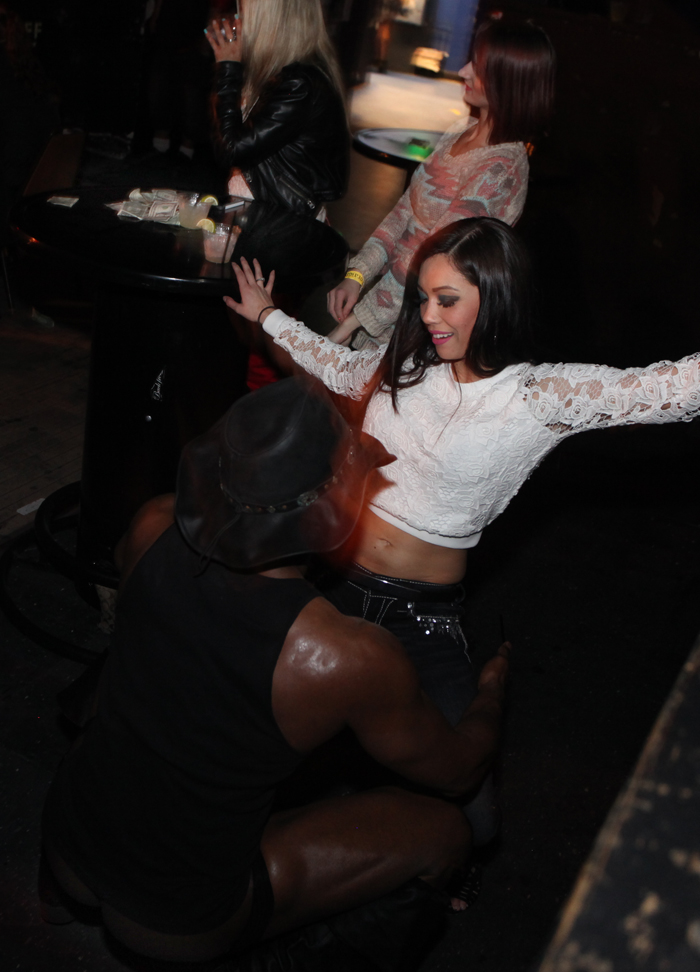 This woman had better moves than any of the dudes... Kelly O 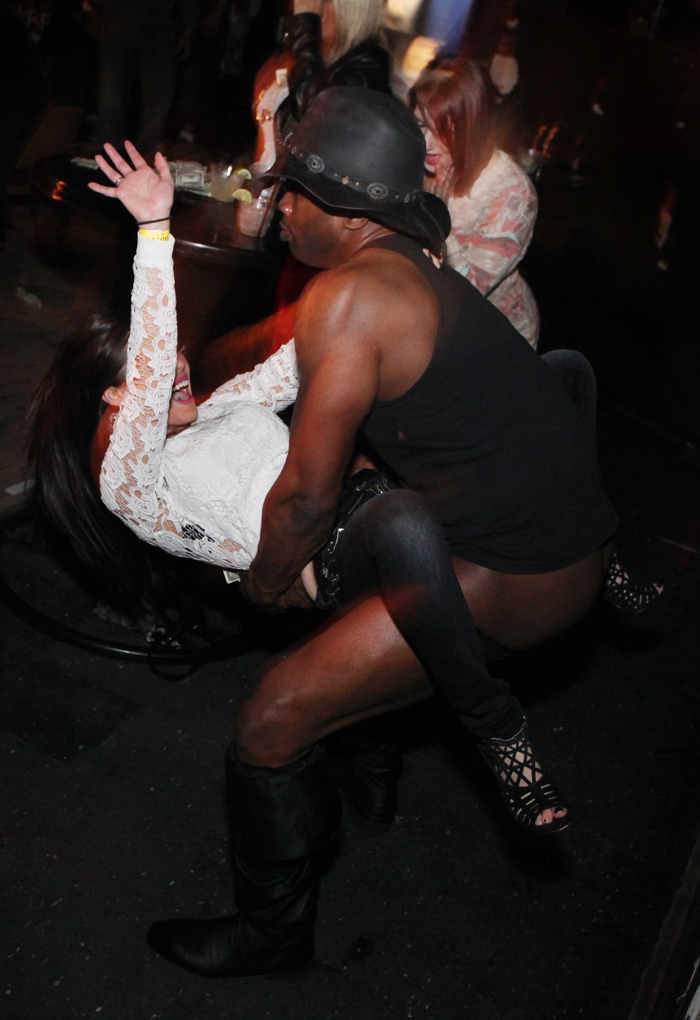 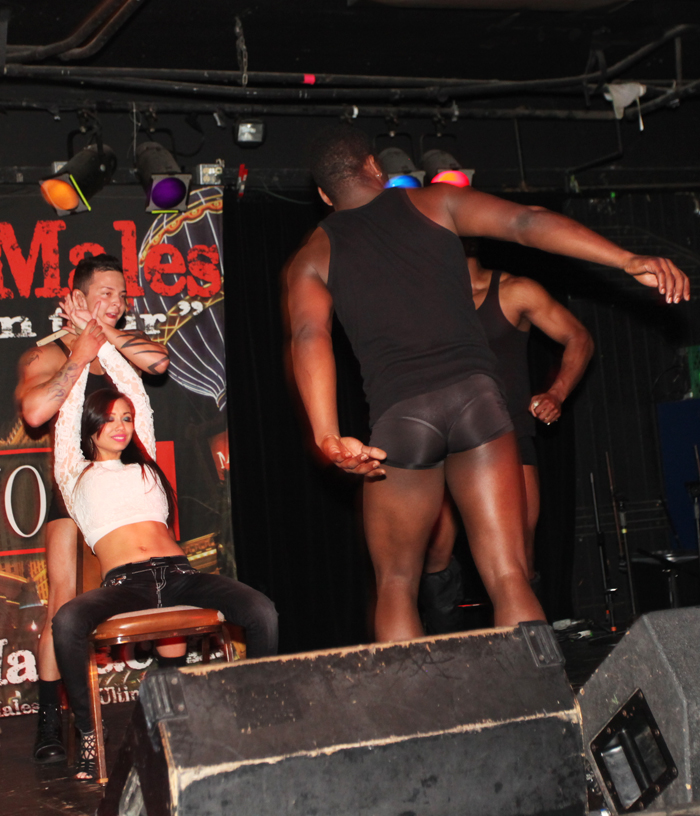 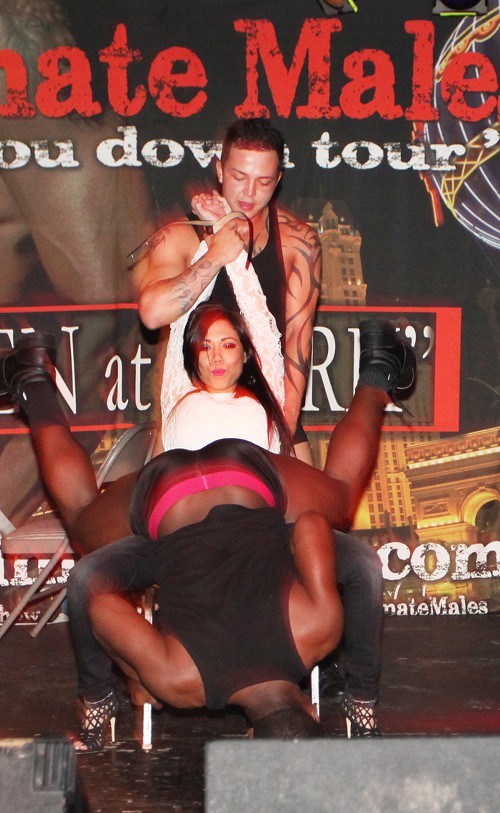 Not one single thing about this looks appealing. Kelly O 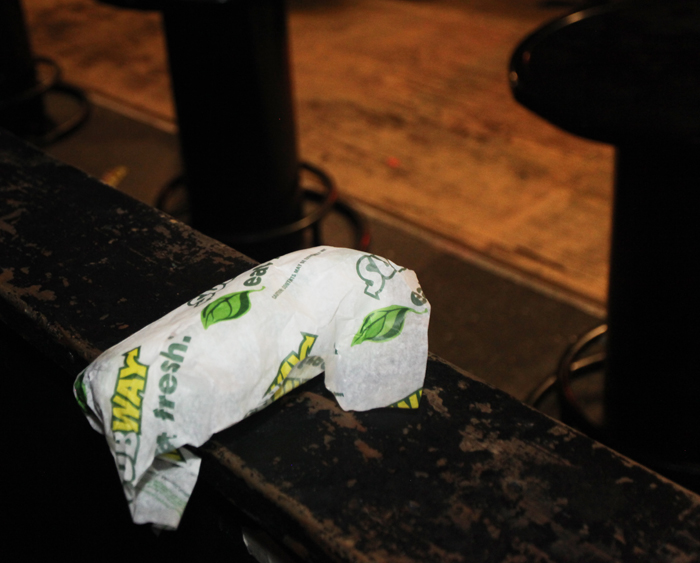 After the show, all that remained was untouched six-inch, still in its wrapper. Get it? Kelly O