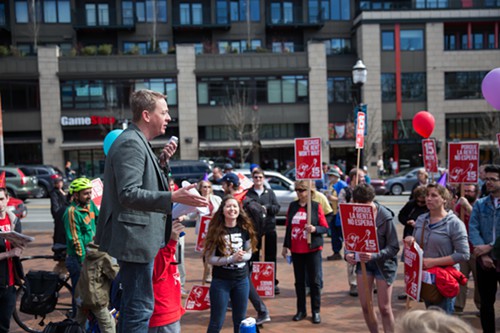 This had to be the happiest minimum wage rally ever, right? People chanted, "Hip hip hooray! Seattle's getting a raise!" CHS.com/Alex Garland

After gathering at Seattle Central Community College, celebrants marched to nearby franchise businesses, including some where workers walked off the job to call for a raise in 2013 and 2014, to tell employees about the new minimum wage. CHS.com/Alex Garland 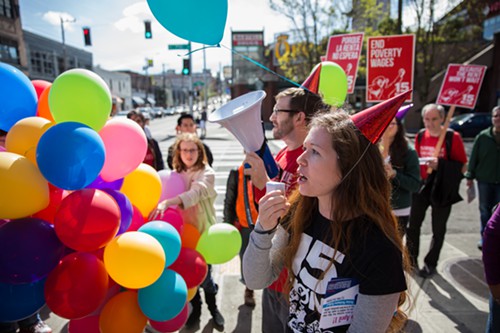 Jess Spear was one of the activists who fought (unsuccessfully) for an immediate, rather than a gradual, increase to $15 an hour. Starting Wednesday, workers in Seattle will make $10 or $11, depending on the size of their employer and whether they have health insurance or make tips. CHS.com/Alex Garland 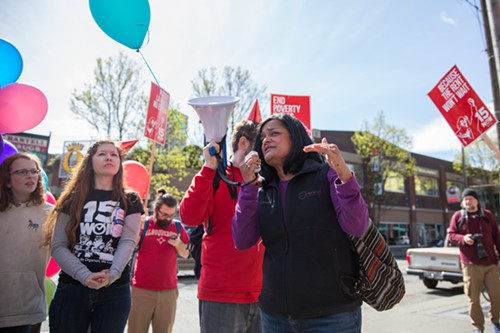 State senator Pramila Jayapal (D-Seattle) urged marchers to travel to Olympia to testify in support of a bill that would raise the statewide minimum wage to $12 an hour. That bill has passed the state house, but is likely to face strong opposition from the Republicans who control the state senate. CHS.com/Alex Garland 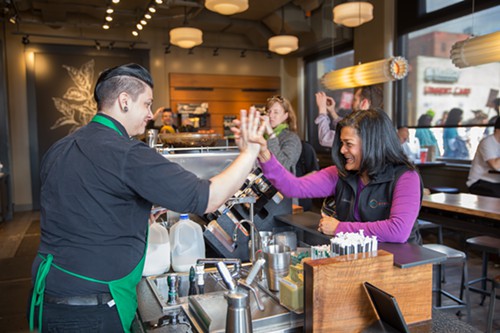 Jayapal was among those who handed out flyers to employees at franchises such as Starbucks and Subway on Capitol Hill and First Hill to let them know about the coming minimum wage increase. CHS.com/Alex Garland 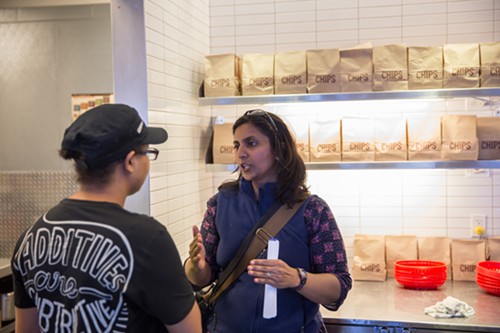 In Chipotle, where employees knew about their upcoming raise, Seattle City Council member Kshama Sawant told them her next fight will be for housing affordability. CHS.com/Alex Garland 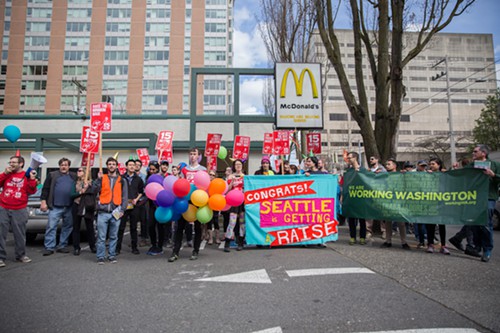 The last stop on the march was the McDonald's on Madison Street, where workers went on strike last year. CHS.com/Alex Garland 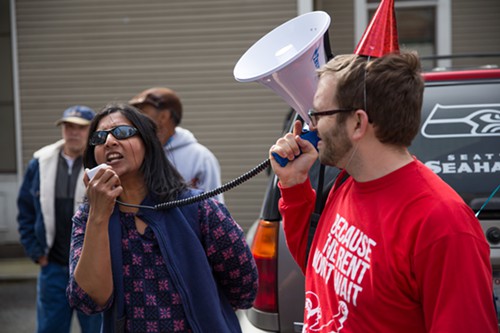 “Congratulations to you all and to us all on this phenomenal historic victory,” Sawant said at the beginning of her remarks in the parking lot of McDonald’s. Later, she continued: “Let’s make sure that all workers know they are getting their rightful legal wage and they know we are on their side and we have their backs if they challenge their bosses against wage theft. Let’s make sure that we will fight for them if they are intimidated, threatened, harassed, or fired for asking for their rights.” CHS.com/Alex Garland
The Stranger depends on your continuing support to provide articles like this one. In return, we pledge our ongoing commitment to truthful, progressive journalism and serving our community. So if you’re able, please consider a small recurring contribution. Thank you—you are appreciated!
CONTRIBUTE NOW