The Newest Idea to Get Money Out of Politics in Seattle: Give Every Voter $100 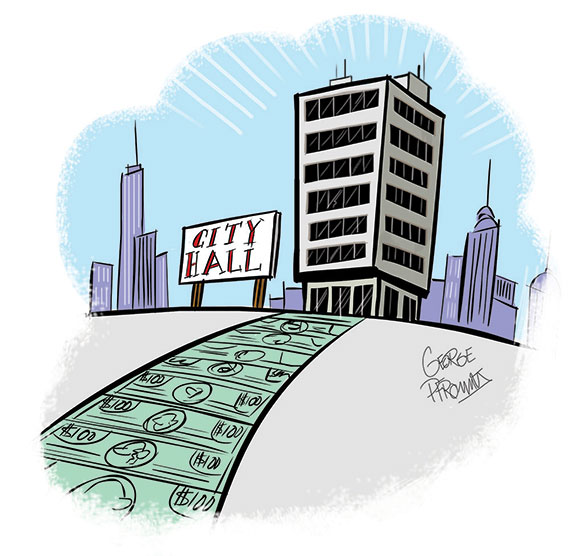 This fall, you could get another chance to vote on campaign finance reform. GEORGE PFROMM
Sponsored

If you’re the type who's always complaining about how city hall is full of rich assholes put in office by their rich friends to do those rich friends' bidding, listen up. You might get a chance to change that this year.

A citizen group called Honest Elections Seattle has filed an initiative aimed at reducing the influence money has on local elections, and they’re about to start gathering signatures with hopes of getting it on this fall’s ballot. Groups behind the effort include Fair Elections Seattle (which supported a different campaign finance measure back in 2013), Fix Democracy First, Fuse Washington, Every Voice, and Sightline.

The initiative would make some big changes to how local elections work, so let’s walk through everything it would do.

• Create a system of “Democracy Vouchers,” where all registered voters would be given $100 worth of vouchers they could hand over to candidates running for city council, mayor, or city attorney. Those candidates then cash in the vouchers and spend that money on their campaign. They would be actual paper coupons until the city’s Ethics and Elections Commission creates an electronic system (which the initiative says must be done by the 2019 election cycle). Candidates who chose to opt in to this system could get some limited amounts of cash donations on top of the vouchers, but the idea is that every voter starts with the same basic buying power. A low-income person has $100 to spend. So does the chairman of Vulcan.

This is what each voucher would look like. You'd get four in the mail every time there was an election. Then, you'd fill it out and hand it over to a candidate you wanted to support.

• Reduce contribution limits for all city candidates from the current $700 per donor to $500. Those limits would be even lower—$250 per donor—for city council and city attorney candidates participating in the voucher program. (They would stay at $500 for mayoral candidates.)

• Ban candidates from taking any contributions from a person or company that has been paid more than $250,000 in the last two years under a city contract or has spent $5,000 or more lobbying the city over the past year.

• Impose a “cooling off period”—a rule that any former mayor, city council member, city attorney, city department head, or a top aide to one of those jobs couldn't become a paid lobbyist in the city for three years after they leave office.

• Require paid signature gatherers working on any city ballot measure to disclose that they're getting paid using a sign, placard, or badge.

The voucher system is the most radical part of this initiative because no other city in the United States has a campaign financing structure like that.

In return for signing up for all these restrictions, candidates in the voucher system get, in theory, access to more donors because people who wouldn’t normally have money to spend influencing local politics would under this new system. And to get that money, candidates would be spending their time interacting with lots of individual voters, rather than on the phone with a handful of their richest friends.

“This gives a grassroots candidate the ability to compete with [well-funded candidates],” says Aaron Ostrom, executive director of Fuse, one of the groups working on the effort. “You don’t have to know a ton of wealthy people to run a viable campaign. You just have to convince people you’re a strong candidate.”

But what’s the incentive for a well-connected, well-funded incumbent to subject him- or herself to new contribution and spending limits?

“There may be a narrative if this passes that we have a public financing system designed to create a level playing field,” says city council member Mike O’Brien, who has long pushed for campaign finance reform and says he’d opt into a system like this if it existed. “If you’re a candidate who doesn’t opt into that because instead you want to raise big dollars from special interests, you’ll have to have a pretty good story for the public about why you didn’t take this path we all created for you.”

Organizers say they'll need about 31,000 signatures to get this plan on the ballot, but they don't seem worried that less than two years ago voters rejected a similar idea. In 2013, during the same election when Seattle supported a new city council district elections system, voters didn't pass a measure that would have matched candidates' private fundraising with public dollars.

O'Brien says that plan—which lost by only by 1,400 votes—was perceived by some as being beneficial to council incumbents since council members put it on the ballot. A citizen-organized initiative could get broader support.

“There’s a lot of energy in the community around it right now,” O’Brien says. And he’s especially interested in the voucher model. “This is the kind of out-of-the-box thinking that we can get from a citizen-led effort, and I think there’s a ton of potential to reshape how the system works.”