Why Did 100 People Camp for 24 Hours in a Chick-fil-A Parking Lot in Bellevue?

Why would 100 people sleep here on Wednesday night? They never heard of Nickelsville? Kelly O
Sponsored

Controversial Southern fast-food chain Chick-fil-A opened today on the busy corner of Northeast Eighth Street and 116th Avenue Northeast in Bellevue. Yesterday morning, at the asscrack of dawn, hundreds of people showed up at the edge of the restaurant's parking lot, armed with coolers, tents, sleeping bags, air mattresses, cornhole games, cribbage boards, and books. Oh, so many amazing books! By 5:30 a.m., exactly 100 people had been chosen and tagged with numbered wristbands that allowed them to set up camp until the following day. The scene was eerily reminiscent of an Occupy camp, except that these 99-percent-ers weren't there to protest. They were there for free chicken. The idea was that the first 100 customers at the first local outpost of the potentially-only-formerly-homophobic Southern Baptist chicken franchise would be rewarded with one free Chick-fil-A meal a week for a year. But there were rules: Once inside, no one was allowed to leave. They could receive visitors, however. People will do anything for free meat. Here's what it looked like: 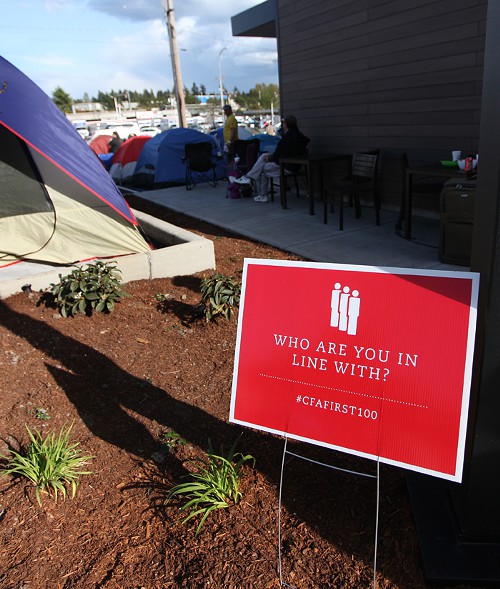 Still closed on Sundays, Dan Cathy's once-biblical business is now booming in the Northwest, with two more locations opening this month in Lynwood and Tacoma.

I thought some LGBT protesters might show up, but none did. I wasn't the only one who anticipated some conflict. As Pharrell Williams's "Happy" played over a loudspeaker, a guy told me someone delivered about $250 of Domino's pizza, with a note that "these are for the protesters." The scene was sunny and relaxed—even "joyous." Kids threw Frisbees. Moms and dads sat in lawn chairs near their tents, waiting for their number to be called so they could join the line for free food. 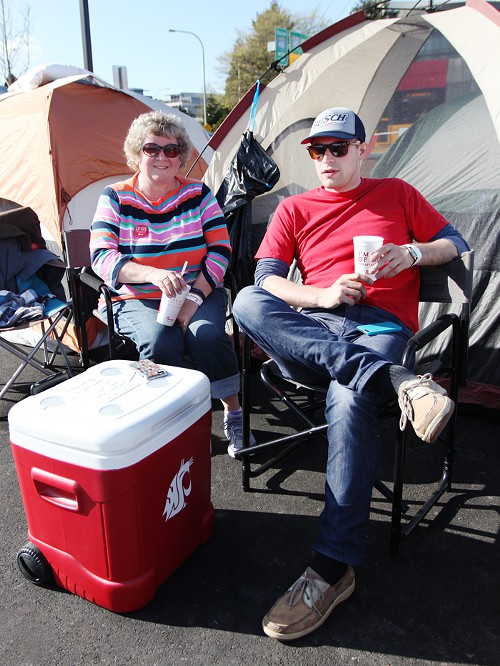 Sheryl (left): "We've been walking our 10,000 steps, getting our exercise in, we're not all just fat people here for free food." Davis (right): "Even my gay friends are like, "FREE CHIIIICKEN!" and willing to cross the line. Where do you draw the line? Can you get mad about this, yet have an iPhone—a company who exploits workers in China? So I do and don't agree. I do know I like chicken." Kelly O 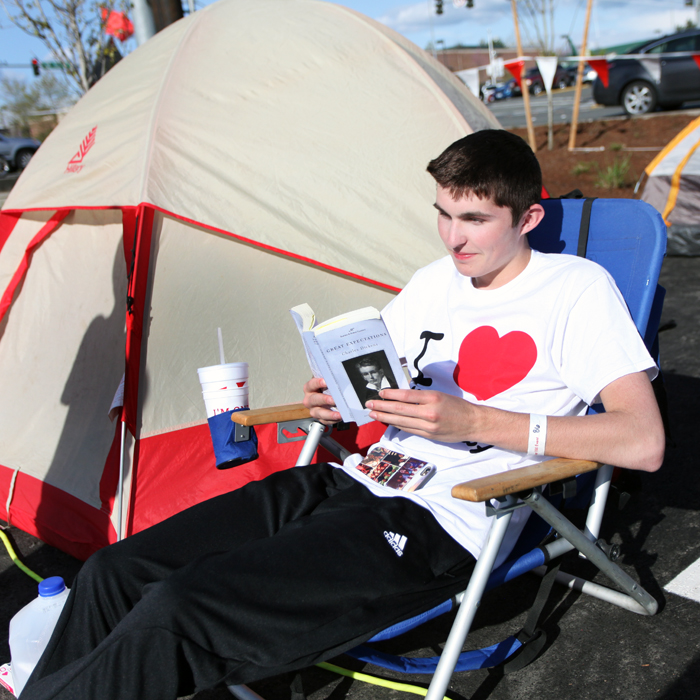 Spring breaker, reading Great Expectations by Charles Dickens: "If you leave the parking lot, you're disqualified, and they check our wristbands when we line up. At breakfast they walked us through the drive-thru and gave everyone free biscuits. For lunch, they practiced having us inside with the new employees, and had us "order" even though there was only one option. I said, "I'll have what everyone else is having." Kelly O 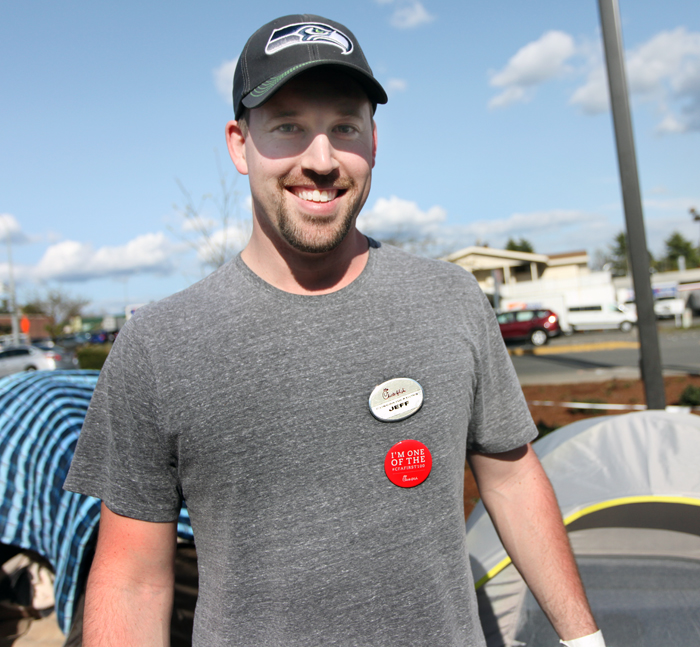 "Jeff", wearing a Chick-fil-A name tag: "I'm not really an employee, someone gave me this name tag at my bachelor party." Kelly O 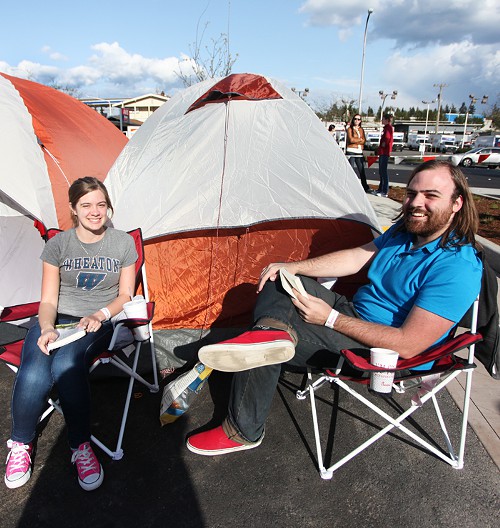 "WHAT ARE YOU READING?": Him: A Lucky Child, it's an Auschwitz memoir. Her: God in My Everything. It's what my church group is currently reading." Kelly O 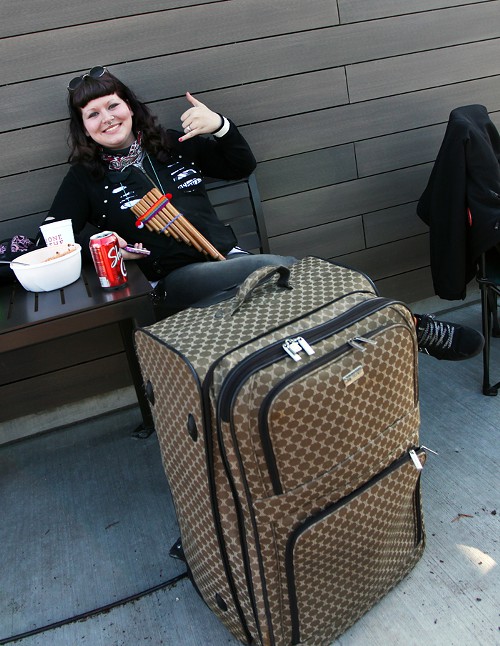 Jade, with a siku, large suitcase, and container of Spanish rice: "This is technically not a pan flute, those are longer—this is a siku. I absolutely LOVE the chicken sandwich and waffle fries here! Right now I'm eating Spanish rice that I brought from home. I packed my work clothes, and I am going straight to work after this ends tomorrow morning." Kelly O 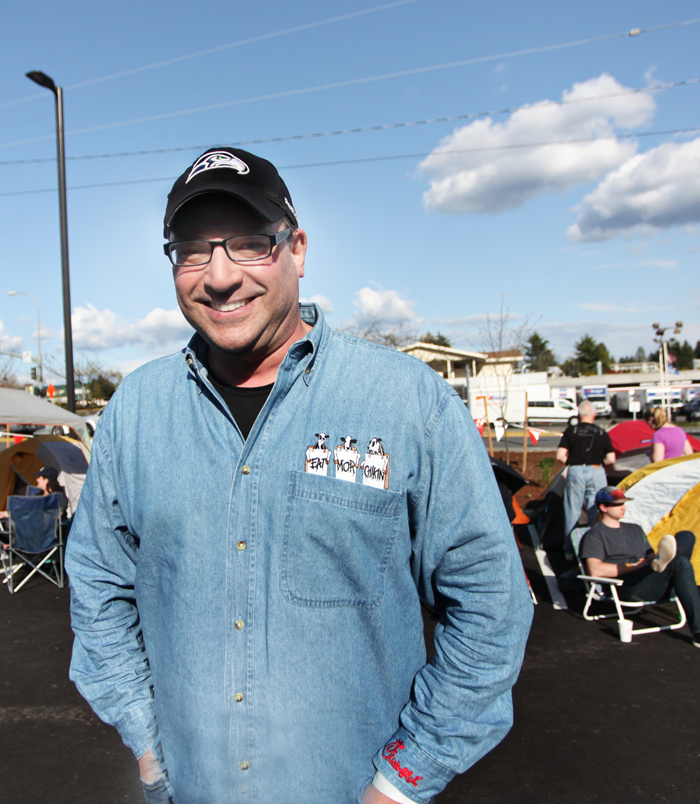 Ken, wearing a vintage Chick-fil-A denim shirt: "You must be from the Bellevue Journal American! Oh, The Stranger? How cool is that!!! The alternative paper! I used to like reading the personal ads in the back. I've been waiting for this for 16 years. I used to live in Atlanta. I've even had people FedEx me Chik-fil-A from Denver. I heard about this opening, and I had to come here. They've provided us with games, exercise, phones, football, it's been a great experience. I'm really CRAZY for this brand! And everybody else here is just as crazy as I am! There's a 70-year-old woman here in a cow suit! This is really a cool thing. People here have great values. I don't want to know anyone's political stance on anything, just shut up and make a great product! I've got lots of gay friends." Kelly O 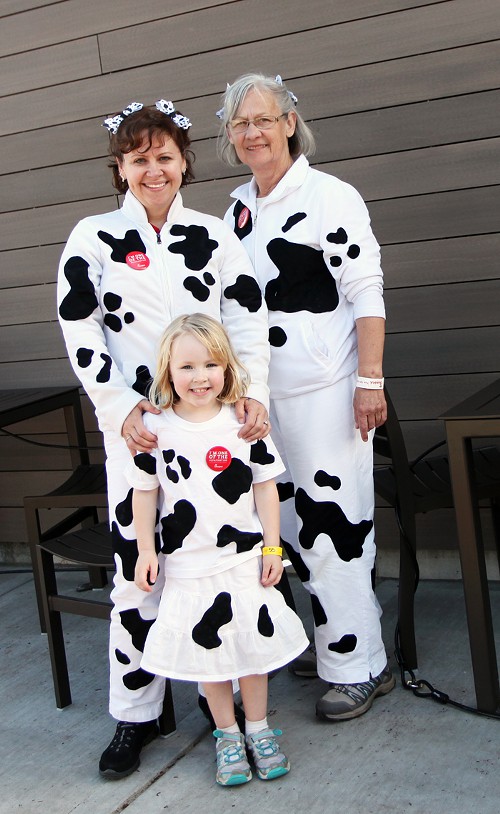 "Triple generation bovine representation" Jeanne (grandma), Lacey (mom, who was reading a book called The Blood Gospel before this photo was taken), and Evelyn (girl). Lacey: "We made these suits! They do cow appreciation day every year on a secret date, and you get free food!!! We thought more people would be dressed up, but we're the only cows. [Are you three related?] We are three generations! Evelyn and Grandma drove by this corner every day and watched the progress… The Denny's came down, walls went up, then the sign... We're so excited. I like the #2—the deluxe chicken sandwich. Grandma, she likes the salads." Kelly O 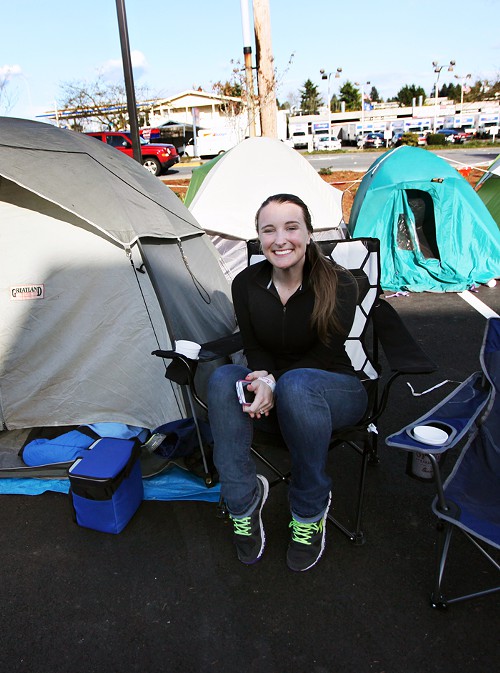 Stephanie: "Do we look crazy? Like a strange species that migrated to this food source? Really, it's like a BIG tailgate party! Only a hundred people, though—and only certain people are allowed in to visit their family members. When we line up for food, they count us, they double-check our numbers. We've played lots of games, done some fun group activities. At other openings, there's usually a DJ and a dance party, but in City of Bellevue you can't have music after 5 p.m. Oh, we're also here because we get 52 free meals! If you're chosen as a "First 100," you get a whole year of free Chick-fil-A! I did the math and figured for the time I'm spending here it's equal to making $10.88 an hour." Kelly O
Sponsored

Catch Fresh Content Streaming Now at the 14th Annual National Film Festival for Talented Youth
Featuring 234 films from top emerging filmmakers, plus live events daily! Streaming through Sunday.
The Stranger depends on your continuing support to provide articles like this one. In return, we pledge our ongoing commitment to truthful, progressive journalism and serving our community. So if you’re able, please consider a small recurring contribution. Thank you—you are appreciated!
CONTRIBUTE NOW

A Cappuccino for Now, a Bottle of Wine for Later

The Juice Club and Union Coffee collab is a bright spot during this terrible, terrible year.