The first question might be the thorniest, but answering it is crucial to answering the other two. New Nordic could be called a subgenre of cuisine, but it is more aptly described as a culinary ethos. In 2007, a bunch of Norse culinary rockstars got together to make a “New Nordic Kitchen Manifesto.” Seeking to undo years of perceived culinary subjugation by more established “haute cuisine,” these members of the Norse “fooderati” were attempting to differentiate and celebrate their native cuisine.

This led, among other successes, to NOMA, the white-hot-shit Copenhagen restaurant that famously threatened to blacklist interns who violated its intense non-disclosure agreement. NOMA is famous for its relentlessly local sourcing and elegantly simple food, which is a good summation of the New Nordic approach to cooking. The manifesto is long and involved, but it can boiled down to this: Use the best local, seasonal ingredients and let them shine. Flavor comes from technique—pickling, smoking, preserving, etc.—rather than spice.

Now, this isn't exactly a revelation for Seattle. Many of our brightest culinary stars have risen from the farm-to-table movement, using the best ingredients and letting them do the talking. And indeed, the manifesto stresses that the New Nordic approach to cooking is globally applicable, being more about methodology than specific ingredients. Lexi—owner of Old Ballard Liquor Co. and one of the masterminds behind Tumble Swede—insinuated that many local restaurants have been New Nordic for years without knowing it.

But if New Nordic is already omnipresent, is Seattle really starved for New Nordic cuisine? Is it different from what we've already eaten at the Whale Wins? According to Lexi, it is. I suspect that her use of the New Nordic label to describe the Tumble Swede pop-up was more of a PR maneuver than an accurate description. While she is certainly ardent about getting the best local ingredients, she's essentially going for is an upscaling of the rustic traditions of her Scandinavian forebears who settled this region. “This is the way poor people ate 100 years ago,” she said, stressing that, as much as she admires the high-concept food at places like NOMA, she'd prefer to stick more closely to traditional recipes, though not necessarily popular ones.

Which means no meatballs. “I'm so sick of meatballs, I could just scream,” she said.

So, without meatballs, what would there be? I knew there would be Aquavit, that lovely Scandinavian answer to gin, bursting with caraway and cloves. And I knew there would be oysters. Armed with an open mind and an empty stomach, I arrived at Bloom, the recently deceased Ballard ramen/sushi joint that has been reincarnated as a multipurpose pop-up venue. Jason Harris, former owner of Bloom and the chef part of the Tumble Swede equation, was in the kitchen, busily shucking oysters while Lexi mixed drinks and mingled with guests.

My first priority was to get my hands on the dinner's specialty cocktail, the “Ingmar Bergman.” I figured if I liked the cocktail half as much as I liked The Seventh Seal, we'd be in good shape. It was a concoction of OBLC's Älskar citron Aquavit, celery soda, cardamom bitters, and lemon verbena liqueur, and, regrettably, it fell flat. The ingredients masked the otherwise powerful flavor of the Aquavit, which, Lexi explained, is what most Aquavit cocktail recipes are designed to do because we Americans can't handle it straight. Shame on us, I guess.

Apparently the same is not true when it comes to recipes of mignonette sauce. Normally, I refuse to put anything but lemon on good oysters, but the intense, spice-rich bite of the Älskar-spiked mignonette was a perfect match for the clean, lithe flavor of the trio of Chelsea Gems we were served.

The potatoes in the warm potato salad were a bit undercooked and under-salted. Courtesy of Tumble Swede

The oysters were followed by a warm potato salad with smoked smelt, radish, and a dressed watercress/arugula mix. The potatoes, an heirloom variety called Yellow Finn that's exceptionally rich and buttery, were so close to being awesome. They were a bit undercooked and under-salted. The smoked smelt offered some remedy to the second problem, but the the little fish were woefully outgunned by the much larger potatoes.

Herring would have been better, and more traditional, but it's currently impossible to get locally. According to Lexi, there's been a dearth of herring due to overfishing, which means she'll likely have to import them from Alaska before the pop-up goes live on April 17.

Following the salad was the main event: nettle pie, a poor farmer's delight. “Nettles are free,” said Lexi, before we dived in. Nettles have a flavor reminiscent of spinach, but nuttier. In the context of the tart's buttery crust and crème-fraîche-and-egg filling, it was hard to pick out their unique characteristics, but that didn't seem to be the dish's raison d'être. It came with a herring roe crema, which was very lemony and provided an excellent counterpoint to the creamy richness of the pie. The dish also came with a shot of Älskar, which provided a crisp, eye-opening intermission from all that cream and butter. 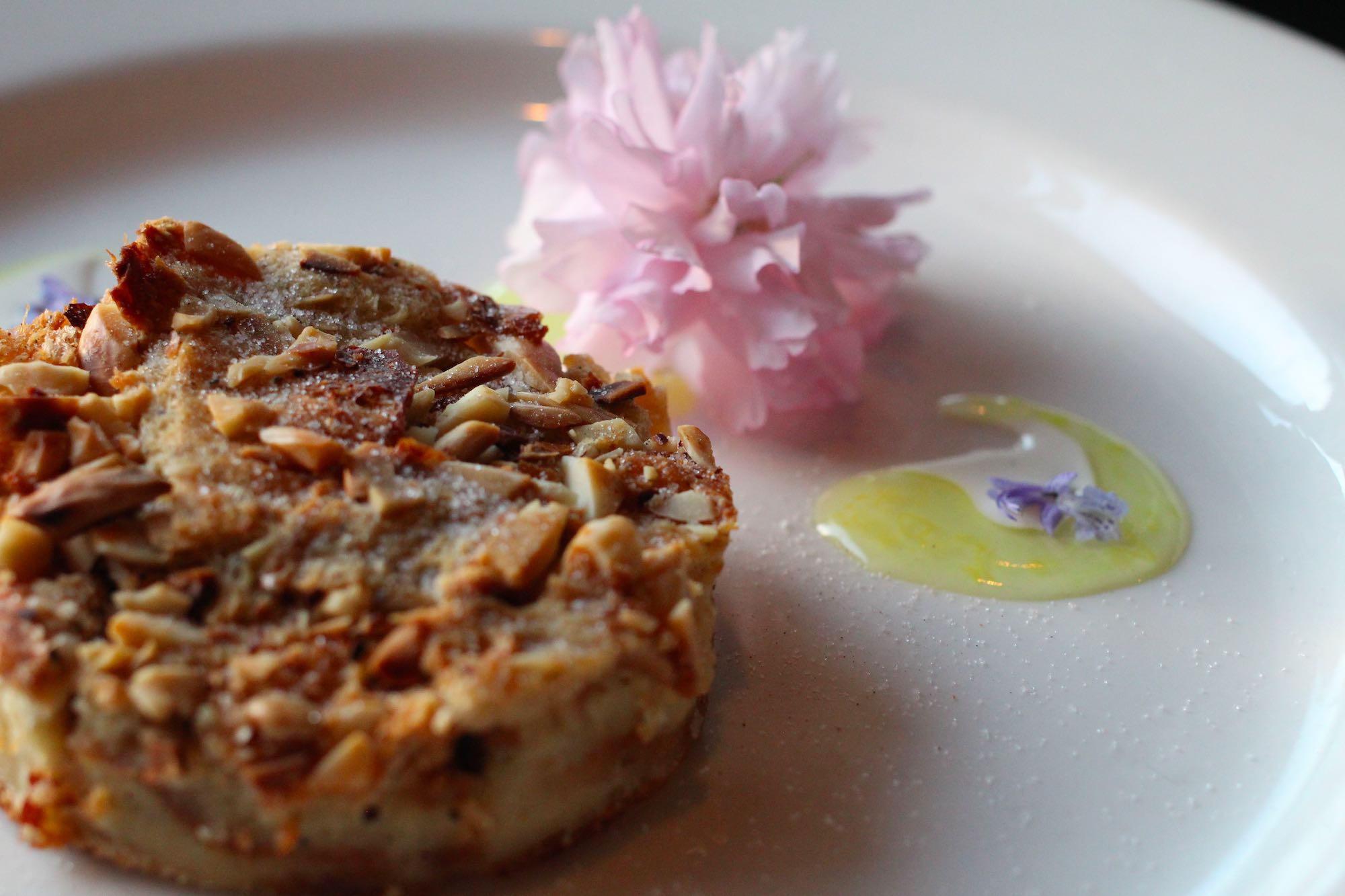 Dessert was a play on semla, a traditional Scandinavian treat served during Lent. Courtesy of Tumble Swede

Dessert was a play on semla, a traditional Scandinavian treat served during Lent. Instead of a cardamom yeast roll, typically filled with milk and marzipan then topped with almonds, Harris' version was a bread pudding, featuring the traditional ingredients along with lemon coulis and a trio of lovely edible flowers. Now, I'm usually of the belief that marzipan makes a dish unfuckwithable, but in this case, the marzipan filling was gummy and flat. And even with a dusting of powdered sugar and dollops of lemon coulis, the dish simply wasn't sweet enough. The dryness of the cardamom didn't help, either.

At $50 for four decently sized courses and a shot of Aquavit, this dinner will certainly give you your money's worth. Of course, part of getting your money's worth at a pop-up involves subsidizing innovation, which is definitely part of the attraction of Tumble Swede. The food isn't perfect yet, though I certainly didn't expect it to be given that I was trying it a week and a half before opening night.

But the food will almost certainly get better, and Lexi's heart is in the right place. She dreamed of opening a Scandinavian restaurant at her distillery, even though she had no experience in the food business. A pop-up, however, is a great way to experiment without taking a huge risk. And, whether you care about culinary innovation or not, you should go, if only to expose your taste buds to something more authentically Norwegian than IKEA meatballs.