Adam One and Sensei 23 put finishing touches on pieces in the Still Life with Sex Toys round of Face Off, while auctioneer John Osgood (center) looks on. Alison Douglas
Sponsored

On center stage was Face Off, a head-to-head live painting and auction event presented by Bherd Studios. Two artists took the stage for each themed round, and had 15 minutes to complete a painting on panel. Before the paint was even dry, Bherd cofounder (and surprisingly good auctioneer) John Osgood started the bidding. The painter with the highest sale takes the crown, and three-time Face Off champion Braden Duncan was unseated by new winner Michelle Anderst, clad in festival-appropriate fur and skivvies.

Michelle Anderst and Zach Bohnenkamp battle it out in the Lady Parts round of Face Off. Alison Douglas

“Face Off is a great format,” said Duncan. “It brings the audience into the artist's studio and invites them to see the process.”

I asked new participant Seb Barnett—who painted a live nude model in her round—if she was nervous about painting in front of an audience. She laughed. “Nah, I barely notice the audience. After you've done the 24-hour CoCA marathon, everything else is easy. Here, it's the time limit that's scary. What can you do in 15 minutes?”

Osgood—who did double duty as painter and auctioneer—agreed. “I had a plan this time. I knew where each color was going, and how I'd mix them, and where the shadows would be... and it all went to hell within the first minute.” 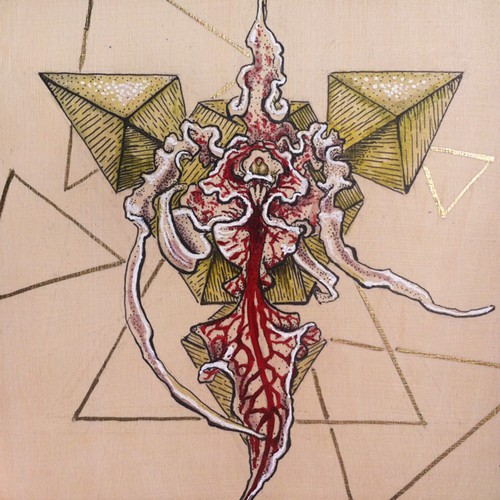 Was the process different from what you normally do?
Creating work for this event was liberating. It's what I already do, but I was able to push the imagery further than I've consciously gone before. My artwork centers around the processes of nature, and sex is a dominating presence in nature—it's everywhere. When the pollen—and allergies—came out in force this season, a friend of mine said, “All the trees are trying to have sex with me, no means no!" Dicks and vaginas, sperm and egg—this driving force is found in nature everywhere we turn. 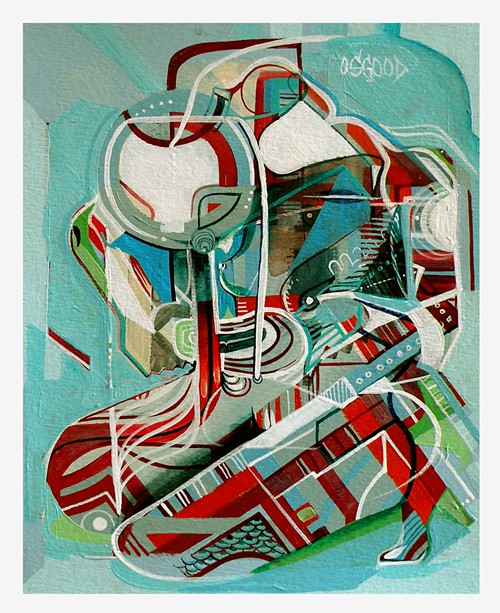 Self-E by John Osgood, 15 by 12 inches, acrylic on watercolor paper (framed).
How has your experience with the festival evolved?
I remember seeing a picture of a Troy Gua piece from a previous SEAF show: a hot dog going through a doughnut. I thought, "I want to be in that show, it looks like fun." I have a great time with SEAF every year, and it lets me get back to that small side of erotica that I've always had in my art. I've always sprinkled in female nudes and playful subject matter, even pre-SEAF. Being able to showcase this side of my work to like-minded people is always a bonus.

Tell me about Face Off, which you and your wife, Michele Osgood, organize.
The idea actually came from a woman from Montreal who was in town for SEAF two years ago. After hearing her story, Michele loved the idea, and she suggested that we create our own. My experience with a doing Face Offs is the fun “artist vs. artist” action. I love it when artists will surprise you: When I went up against Braden Duncan for the first time, she put brushes in each hand. She was ambidextrous! Not fair! 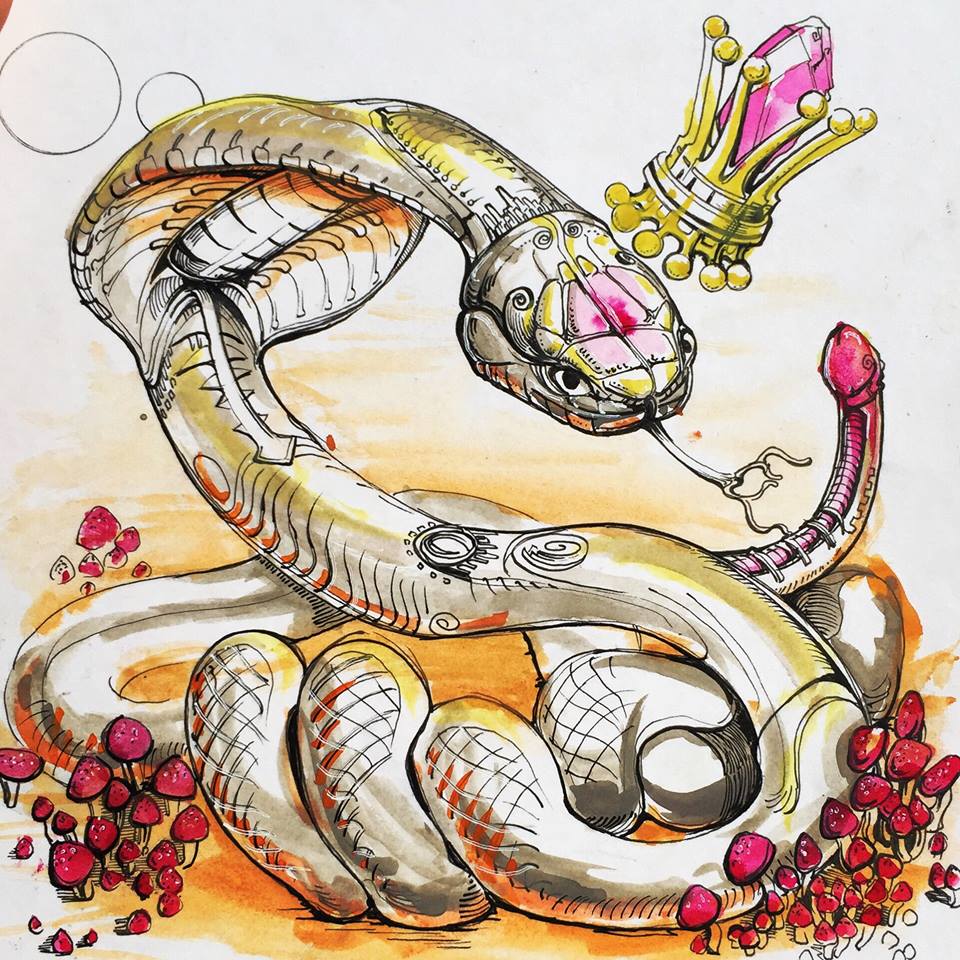 King Cobra by Adam One, gouache and ink on paper.
Was creating work for the festival markedly different from your usual work?
Until this point I had hardly even considered my artwork taking this turn. Everything I've created in the past has been so philosophical and analytical that just having the chance to create light-hearted imagery really pulled me into this experience. Creating art that isn't erotic is much more difficult than letting the sex run free. I spent years training my mind to not draw penises and vaginas on accident, hidden in logos or illustrations. I spent hours rendering images up close, and stood back only to find that my subject looked like a giant penis in the end. Going into a work of art without THAT giant storm cloud over your head is, like, pure unadulterated freedom.

Tell me about the works in this exhibit.
My interpretation of this idea strays away from direct representation of sexuality and instead focuses on the sexuality inherent in all things around us. We are surrounded by penises and vaginas, if only we know where to look. The next time you're eating a Reuben sandwich, take the time to open up your slices of bread and look inside. Unmistakable sexuality.