The scene of the argument. Orhan Cam/Shutterstock

This morning, in a giant marble box perched high atop a swamp on the other side of the country, eight old people in robes chattered about who should be allowed to get married. Meanwhile, a ninth old person, a man whose name you might be able to guess, bounced in his chair and stared at the ceiling, waiting for it to be over.

With oral argument now wrapped in the Supreme Court's marriage equality case, we now begin the delightful game of making bullshit predictions for the next few weeks. The Justices are a wily, unpredictable bunch, capricious and un-knowable—imagine living with nine cats, all of whom employ a large staff of clerk-mice to issue commands to you.

But that said, while their questions today don't exactly reveal any obvious plans, they do reveal a few surprising issues under consideration—including a little rhetorical diversion by Justice Antonin Scalia that might've just accidentally helped the cause for marriage equality. Whoops! 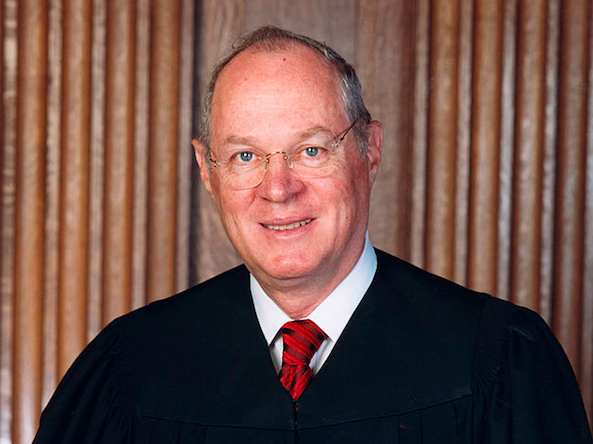 Justice Kennedy: “The word that keeps coming back to me is ‘millennia.’” Official US Supreme Court Portrait

Hey What About History?

Justice Anthony Kennedy, generally considered the swing vote in this case, offered a few comments that are cause for concern. “The word that keeps coming back to me is ‘millennia,’” he said, meaning that marriage has been withheld from LGBTs for a long, long time. “It’s very difficult for the court to say, ‘Oh, we know better.’”

I'm not sure that it is all that difficult for the court to say that—that's kind of the point of the whole "supreme" thing in their title—and it's worth pointing out that they did basically exactly that in the case Loving v. Virginia. From Lawrence (establishing a right to privacy for LGBTs) to this case, almost the same amount of time passed as between the Supreme Court's desegregation ruling in Brown and their ruling legalizing interracial marriage in Loving.

So, yeah, millennia and all that. But sometimes when it's time for a change, it's time for a change. Mary Bonauto, the hero arguing for equality, pointed out that taking a wait-and-see approach "is not neutral." People are being hurt every day by the marriage bans. Not to mention, she pointed out, there are now decades of social science showing that marriage equality is a good thing. (Nice job getting that on the record, Mary.)

In other words, it's not risky for the court to to be a part of the evolving understanding of marriage.

Justice Alito's been thinking about Plato, Socrates, and their love for teenage athletes. Plato and Socrates / Shutterstock
Marriage Bans Hurt

At one point, the court asked whether every society that has banned marriage equality has been "irrational" and "invidious." The answer, of course, is "yes" and "could you use that in a sentence?"

(From a legal perspective, the word "invidious" means treating similarly-situated groups differently for the purposes of malice or causing damage. If there is no rational reason for that treatment, then it's invidious; if there is, then it's not.)

Mary Bonauto answered, defty, that "I do believe times can blind, and it takes time to see the stereotypes.” Sotomayor chimed in that LGBTs have certainly been treated poorly over the milliennia.

Then things got a little weird. Justice Samuel A. Alito, Jr., started wandering down a path about the ancient Greeks; he pointed out that Plato had nice things to say about gay relationships, even though the society didn't allow gay and lesbian couples to wed. This is ... not a great argument. I'm not sure where he was going with this one. Maybe he was daydreaming about greco-roman wrestlers. Lord knows I was.

"I can’t speak to what was happening with ancient philosophers,” Bonauto said, and then we were back on track. “Even if that is not a purpose to demean," she said, referring to marriage bans, "They encompass moral judgments and stereotypes of gay people.” And that's not allowed in this context.

Sotomayor asked the states defending their bans: how does denying marriage to gays and lesbians help heterosexuals? They did not have a great answer to that. Michigan Solicitor General John Bursch answered that if marriage is a union of people who are in love, instead of who make a baby, then more people will produce offspring and then abandon each other. Yup, they're still trying to claim that gay marriage causes straight divorce. So if you're wondering what arguments legal scholars of the future will be making fun of, wonder no more. 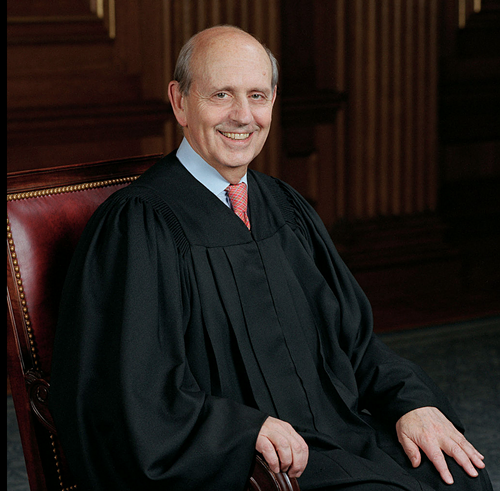 Okay, this is the big moment: Justice Stephen G. Breyer called marriage a "fundamental liberty," and added, "marriage is as basic a right as there is.”

These cases hinge largely on whether marriage for LGBTs is a new invention, or an aspect of an existing institution. For Breyer to call it "fundamental" and to then invoke the Fourteenth Amendment (that's Due Process and Equal Protection) means that he sees marriage as part of a freedom that extends to all people, not just to straight people.

“Marriage is open to vast numbers of people,” he said. Gay and lesbian couples “have no possibility to participate in that fundamental liberty. And so we ask why.”

One other nice thing about this quote: in the past, a lot of states had cited Baker v. Nelson in defending their marriage bans, and today's questions from the court essentially said "hey, knock it off, you knuckleheads." In the Baker case, from the early '70s, the Supreme Court said that marriage for LGBTs really does not concern the court one way or another. To this day, states have been pointing to that case and saying, "See? We should be allowed to decide who gets married." But now that Breyer has said "and so we ask why," that should be the final nail in Baker's coffin. (Hopefully. It may come back as a sparkly vampire.) 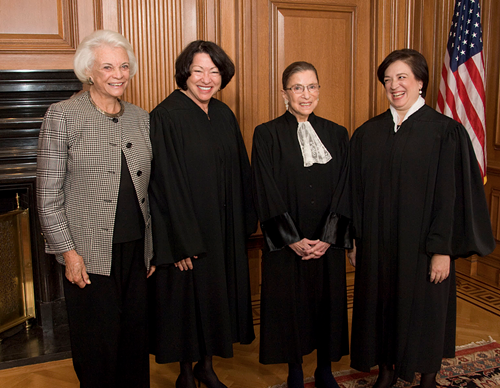 Mary Bonauto opened her oral argument by calling marriage bans a “stain of unworthiness," which set the tone for things.

Later on, Justice and action hero Ruth Bader Ginsburg (third from left) observed that marriage has recently become "more egalitarian," anybody gotta problem with that? Presumably she made this observation while giving Roberts a wedgie. I'm looking forward to the courtroom artist's rendition.

RBG brought this up as evidence that marriage can change, and sometimes it can change for the better. If we're going to allow people of different races to marry, and we're going to stop treating wives as property, why can't the nice gay couples get married, for Pete's sake?

Later on, Breyer asked if it should be up to voters or courts to decide who gets to marry. Mary Bonauto had another nice verbal flourish in response, and even used it to conclude her argument: This isn't about whether states or courts should decide who can marry, she said, but whether the choice of who to marry is going to be made by the government or by the individual.

BOOM. Mic drop. Bonauto then slipped on a pair of sunglasses, punched a bust of Justice Stephen Johnson Field, and rode out of the courtroom on a motorcycle. 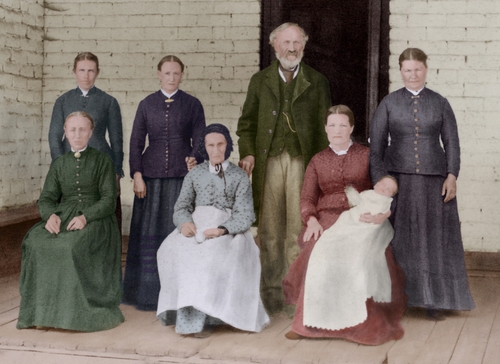 My least favorite part of the marriage debate is when polygamy comes up, for two reasons: One, because polygamy really has nothing to do with marriage for LGBTs (it's as heterosexual as it is queer so you could just as easily say that straight marriage leads to polygamy); and also, the argument generally assumes that polygamy is necessarily a bad thing.

Alito basically asked today, "If your argument is that people in love should be allowed to decide who to marry, why exclude polygamists?"

That's a pretty tempting question. But the response from the petitioners was smart: That would be a far greater disruption to the institution of marriage than just allowing gays and lesbians to wed; it would complicate issues like divorce and child custody. Who would make medical decisions if two of the spouses disagree? There are a lot of potential problems that would have to be worked out. Not to mention, polygamy often involves "coercion" and "consent" issues, Bonauto said.

That having been said, I don't think it's a good thing to deny rights to couples in plural relationships. When a group of people want to make a go of it together—and many do—I think there ought to be legal mechanisms in place for them to protect themselves and each other. The current case really doesn't address that issue one way or another ... but maybe another case, someday, will. 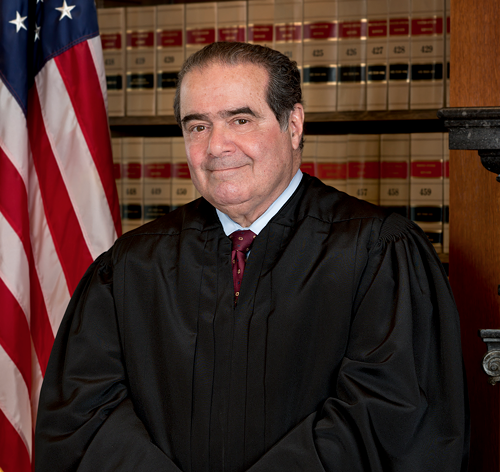 My favorite moment came when Scalia seemed to be attempting a "gotcha." He called marriage equality "unpalatable" to religious people (that's a dangerous road to go down, since the same was true of integrated schools), and suggested that marriage equality would coerce faith leaders to officiate over weddings they don't approve of.

I can't even begin to imagine why he brought this up. He knows it's not true. (At least, I assume he's familiar with the First Amendment.) Is he just trying to pander to the religious right? Why does a Supreme Court justice need to pander?

Scalia pointed out that the state grants licenses to religious officials to conduct weddings; and if the court requires states to recognize marriage licenses, those officials may be asked to conduct gay weddings. How can the state grant a license to do something if the bearer of the license is not exercising its power consistently?

This is such a weird line of questioning that it seems almost like he's deliberately throwing the fight. A license from the government to a private citizen doesn't come with a requirement that they exercise it consistently. Just because you have a license to operate a cab, for example, doesn't mean you're required to drive on the Sabbath.

But Scalia seemed to have just read a few scare-mongering articles about gay wedding cakes, and heard the (completely false) homophobic claims that gay couples are going to force unwilling priests to marry them.

Kagan easily deflated this fear: Rabbis refuse to marry people on the basis of religion all the time, she said, in the case of inter-faith couples. No big deal. Stop it, Antonin.

I mean ... obviously. So what's the deal? Was that an intentional whiff from Scalia? Was he just setting up the question so it could be knocked down? Again, why would he do that?

And he's free to put that in his dissent (or, heaven help us, his majority decision if it comes to that). But this exchange also established a clear record that marriage equality doesn't necessarily impinge on religious freedom. And that's fantastic.

From a PR perspective, I suppose he might've meant for this line of questioning to be a gift to the anti-gay side. But from a legal perspective, it was a gift to ours.