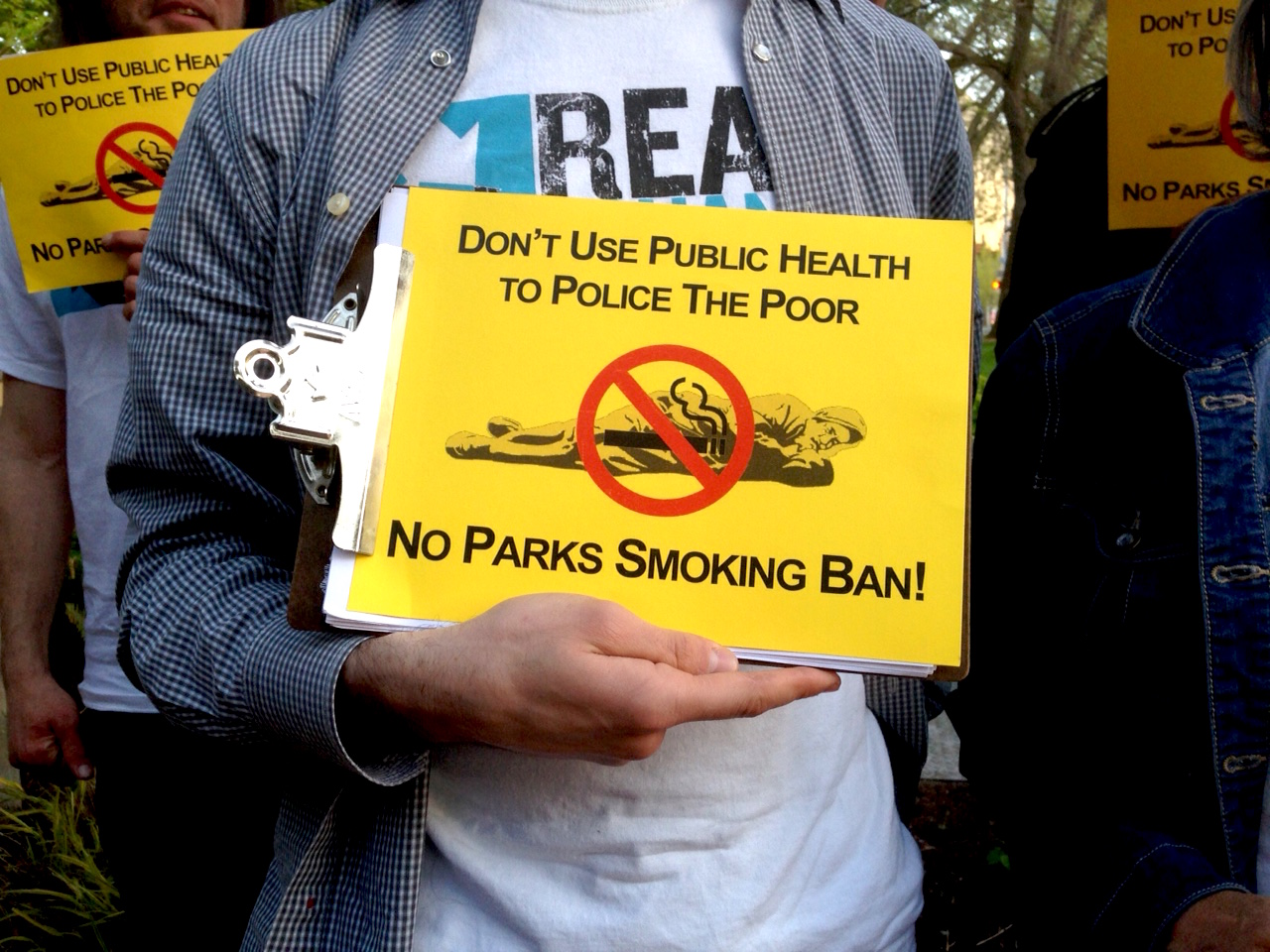 Homeless advocates are fighting a proposed ban on smoking in all city parks. HG

Add the ACLU of Washington and the Seattle-based Low Income Housing Institute to those on the record opposing a proposed ban on smoking cigarettes in city parks.

"While the Low Income Housing Institute (LIHI) is a fervent support of public health," that group says, "the ban on smoking in parks is a classic overreach and an offense to social justice."

(Both groups' letters are worth a read, so I've included them in full below.)

The ban is supported by Mayor Ed Murray and both the outgoing and incoming superintendent of city parks.

The ACLU and LIHI say they're worried the new rule would be used disproportionately against homeless people because they often have nowhere else to go and because it will be enforced mostly in downtown parks, where there are more homeless people than in most other city parks. The homeless advocacy group Real Change has also come out against the ban.

A similar ban was proposed five years ago by then-parks superintendent Timothy Gallagher and also opposed by the ACLU of Washington. Gallagher eventually backtracked and we ended up with the limited ban in place today: no “smoking, chewing, or other tobacco use” within 25 feet of playgrounds or other people.

The idea of a full ban returned in March. Murray and the parks department argue the 25-foot rule is too hard to enforce and a full ban is needed both because of public health concerns and the demand on parks maintenance workers responsible for cleaning up cigarette butts. Under the proposal, smoking cigarettes in city parks would result in a warning, then a ticket or a ban from the park, which, if violated, could result in arrest.

The Board of Park Commissioners, a citizen group that makes recommendations to the city about parks policies, took public testimony on the potential ban last month. That testimony was a pretty even split between homeless advocates opposing the ban and others, including a representative from the local office of the American Lung Association, supporting it. New York, Portland, and a bunch of other cities have similar bans.

But even parks staff admit the ban would disproportionately affect some groups. At the public hearing, Susanne Rockwell, a strategic advisor to the parks superintendent, said, “It is fair and honest to say we do suspect there could be a disproportionate impact." She acknowledged parks staff "observe more people that are homeless and people of color in our downtown parks,” which is where enforcement of the new rule would be concentrated. But, Rockwell said, park rangers' focus would be on education before enforcement, and “the homeless have just as many equal rights to a healthy environment as those who have other areas of respite to go to.”

The ACLU of Washington isn't buying it.

"The rule would disproportionately impact the poor and homeless," writes the organization's deputy director Jennifer Shaw, "who do not have living rooms and front porches, with minimal health benefits over the current rule... Although the Department asserts that the rule will be applied equally to all park users, it is clear that homeless people will be disparately impacted. Homeless individuals tend to spend more time in public parks. The National Coalition for the Homeless has listed broad smoking bans as among the most objectionable of anti-homeless measures because they are never enforced equally."

The proposed ban would not cover electronic cigarettes or vape pens. The parks department says that's because those products can sometimes help people quit smoking cigarettes. But LIHI's executive director, Sharon Lee, writes that such an exception "shows that this ban is meant to target the poor and homeless that frequent the city parks" because those products are "significantly more expensive than a pack of standard cigarettes." (The ban also doesn't apply to marijuana because there's already a ban on smoking pot in public.)

The board is scheduled to vote May 28 on whether to recommend the ban to the superintendent, who’ll make the final call.

Here is LIHI's letter, with emphases added by me:

Board of Parks Commissioners
Seattle Parks and Recreation

RE: City of Seattle’s Proposed Ban on Smoking in Public Parks

Dear Mayor Murray and Board of Commissioners:

While the Low Income Housing Institute (LIHI) is a fervent support of public health, the ban on smoking in parks is a classic overreach and an offense to social justice. There are already provisions that make it illegal to smoke in the park within 25 feet of a playground or other patrons. This more comprehensive ban appears to target populations that have few other places to go. The Commission admitted that the park rangers are not enforcing the current bans and that this new ban will disproportionately affect homeless populations.
The fact that this ban makes exceptions for vape pens and e-cigarettes (items that are significantly more expensive than a pack of standard cigarettes and are so new they have unknown second-hand health effects) shows that this ban is meant to target the poor and homeless that frequent the city parks.

Seattle Park’s staff have also admitted that this new rule, which can result in tickets, fines and permanent removal from the park, will disproportionately affect people currently experiencing homelessness. Although, “homelessness” is not a protected class, open discrimination is also not in line with Seattle’s values. Further, homelessness affects the disabled, seniors, people of color, and veterans, all of which are protected classes that should not be systematically removed from our parks.

People of color are significantly over-represented among the homeless population. The Parks Commission’s decision should be guided by the City of Seattle’s Race and Social Justice Initiative (RSJI). You should not adopt policies that further compound the problems facing homeless men and women of color who are desperately trying to survive on the streets of Seattle. We ask that Mayor Murray and the Commissioners not permit this ban to take effect and instead find other ways to promote health and safety by, for example, providing more affordable housing to end homelessness in our region.

Instead of adding more fines or banning to people who are homeless, the Mayor and Parks Commission should be proactive and implement the recommendations from the Emergency Task Force on Unsheltered Homelessness. Their report calls for emergency and temporary overnight shelters in city-owned buildings include Parks facilities. Other mayors throughout the country have successfully reduced the number of unsheltered homeless families and individuals on the streets by setting up winter warming centers, short term severe weather shelters, and use of community centers during off hours to help people in need.

LIHI supports the Mayor’s call for 20,000 new rent-restricted affordable housing units within the next 10 years. We ask that you dedicate 5,000 of these units to address the homelessness crisis by providing permanent rental housing linked with services for homeless families, veterans, seniors and disabled individuals.

And the ACLU of Washington's, with emphases added:

Dear Superintendent Christopher Williams and the Seattle Parks and Recreation Board of Park Commissioners,

I am writing on behalf of the American Civil Liberties Union of Washington (ACLU-WA) to urge the Seattle Parks and Recreation Department to reject the proposed amendment to Parks Code of Conduct P 060 7.21.00 section 3.2.10 which would ban all smoking in Seattle public parks.

The proposal is unnecessary. The Parks Department currently has a rule that accounts for concerns about second-hand smoke by prohibiting smoking and other tobacco use within 25 feet of other park patrons, play areas, beaches, playgrounds, and picnic areas in parks. This is a sufficient restriction for use of a legal product.

The rule would disproportionately impact the poor and homeless, who do not have living rooms and front porches, with minimal health benefits over the current rule. If individuals had a private residence to smoke in, there would be less of a need to smoke in a public park. Banning low-income and homeless individuals from public spaces simply for smoking is not an acceptable approach.

Although the Department asserts that the rule will be applied equally to all park users, it is clear that homeless people will be disparately impacted. Homeless individuals tend to spend more time in public parks. The National Coalition for the Homeless has listed broad smoking bans as among the most objectionable of anti-homeless measures because they are never enforced equally.

In this case, the enforcement will be specifically targeted at the parks in the downtown core of Seattle, where homeless populations are particularly high. Furthermore, Seattle has a history of disproportionately enforcing similar regulations. For example, during the first six months of marijuana legalization, more than half of the tickets for public smoking were issued to homeless individuals or individuals with addresses associated with homeless services.

Enforcement of this ban will impose a counterproductive financial burden on Seattle residents who already are homeless. Most will be unable to pay the $27 fine, and the City will waste resources attempting to collect from them.

The proposed amendment’s enforcement standards, which include criminal sanctions, also are problematic in that they grant a significant expansion of discretionary authority to police, likely resulting in a harmful increase in the cycle of arrests and exclusion orders that already burden homeless people. The proposed rule permits officers to issue citations even without a prior warning “based upon the park and circumstances.” A single smoking incident can lead to being excluded from the park based on a subsequent park rule violation, Seattle Municipal Code violation, or state law violation of any kind. An individual can be arrested for entering any park or park facility if they have been excluded from one park for smoking. As a result, individuals can be effectively banned from all Seattle public parks for the duration of the exclusion, which may last up to a year.

In addition, the procedures for challenging an exclusion order are burdensome for the homeless. To challenge an exclusion, a person must submit a request for a hearing. Notice of the hearing date and time then is sent to the person via mail, which likely will not reach a homeless person. This process will discourage people with no fixed address or phone from requesting a hearing at all.

Any potential health benefits or administrative convenience derived by this proposed rule are far outweighed by its disparate impact on the poor and homeless. On behalf of the ACLU-WA and our more than 50,000 statewide members and supporters, we ask that you reject this proposal.