I'm a Cook and I Want You to Keep Your Tips 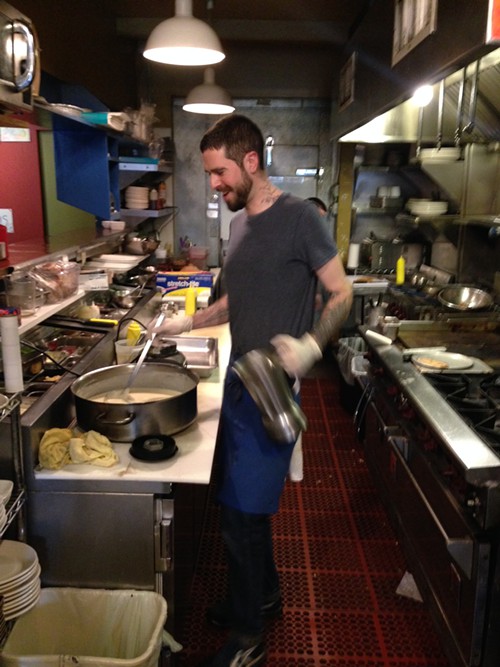 After nearly two decades working at restaurants, I now make a career high of $14 an hour. Courtesy of the author
Sponsored

For the first time in my life, a number of people who aren't me seem to feel I should be paid better. But their leading solution to this problem (subsidizing my wage with tips or a service charge) is unfair, and their central reasoning for this need (that I work long, grueling hours) is over-simplistic.

Like many of my tribe, I started in the dish pit, making $6 or so to wear strangers' leftovers and haul garbage cans twice my weight. It was the '90s, I was 14, and minimum wage plus whatever cigarettes I could bum from the waitstaff seemed perfectly just compensation. I bought a used Stratocaster and a bunch of ska albums. I was a goddamned king.

Now, 18 years on, I've picked up some skills. I've made a decent sauté cook of myself, with a nuanced sense for balancing salt, sugar, and acid. My plating is sculptural yet approachable. Elvis Presley, were he with us today, would be neither as velvety nor as rich as my hollandaise. I've acquired technique, developed finesse, made connections in a thriving, ever-evolving industry. And if all goes well, as I wade into the third decade of my culinary tenure in 2019, with all the training and experience of a veteran, I can expect to be making ... minimum wage.

Before I get too heavy with the bellyachin', I should be clear that I work for a very decent company on Capitol Hill with a diverse and, by and large, intelligent group of people. The owner is an upbeat, funny guy with loads of talent and a good head for business. I get the feeling that he genuinely cares about his employees, and I have yet to encounter any of the wage theft, exploitation, or negligence I've seen in so many other restaurants. The pay at this place is what the industry considers competitive, but the competition, apparently, ain't too fierce. I'm currently pulling down a career high of $14 an hour, plus a small share of the tip pool (not enough to pay the bills with, mind you, just a few bucks to make my wallet less resemble the cold eternity of death in outer space.)

After finding ourselves pregnant last year, my partner and I moved from Capitol Hill to Ballard, into a unit owned by a nonprofit housing group. No way in hell we could swing a two-bedroom at market rate anywhere in Seattle—I simply don't win that much bread. And Affordable Care Act or not, the annual tax penalty is far more affordable than buying health insurance. God help me if I ever need stronger medicine than Old Crow and Kroger brand ibuprofen. My family gets by, in an austere way, and I'm thankful to be employed.

But the sort of housing situation we enjoy is incredibly scarce, good health is fleeting, and I'm not the only cook out there attempting to support a family on an entry-level wage. 15 Now! is an important movement, if only for promoting a dialogue about living wage in the 21st century, but $15 an hour isn't even a realistic income for a Seattle resident today, let alone in the dystopian world of 2019, where (presumably) restaurant workers amuse the Apple Watch-wearing nouveau riche by engaging in deadly blood sport between courses and still walk with tips that are kinda, ya know, meh.

Since arriving here in 2006 I've seen neighborhood burger joints grow into duck-confit-slingin' minor empires, the pizza and taco markets revolutionized through slick decor and hefty corporate backing. I've watched the price of a smoothie rise so dramatically it feels like a human rights violation. And though this growth is built in part on the labor and talents of those doing the cooking, I've regularly witnessed back-of-house staff like myself priced out of our own neighborhoods and relegated to hour-long commutes to craft an increasingly fetishized product we can no longer afford to buy. Try to imagine an electrician or a finish carpenter accepting minimum wage after 20 years on the job.

Okay, not all back-of-house positions require such skill, but anyone who excels at the basics will eventually learn more craft and work directly with food—that ephemeral art form bringing customers through the door. It would be nice if those climbing the ladder found a legitimate career at the top.

In “I'm a Waiter and I Think Getting Rid of Tips is a Good Idea,” Tobias Coughlin-Bogue embraces one approach that's been kicked around since Seattle's wage ordinance went into effect, namely the abolition of our traditional gratuity system in favor of a service charge. This charge, which I imagine customers paying as they quietly utter curses for Comrade Sawant and the Proletariat, is to be split up among the whole house, either raising or lowering everyone's income to the city-mandated minimum without injury to a restaurant owner's net profit. While I appreciate the magnanimity of Tobias's stance, and I'd totally let the dude buy me an Old Crow, this Robbing Peter solution boils down to, as Dan Savage aptly put it, “Take a place with some people making decent money and some people making far-from-decent money and turn it into a place where no one makes decent money.”

There's no labor union for the type of work I do, but if there were, it sure as shit wouldn't be petitioning my coworkers—the waitstaff—to pay me what I'm worth, provide me with comprehensive health coverage, and keep a roof over my daughter's sweet, fuzzy head. It's the responsibility of business owners to keep their kitchen talent out of the cold. Period. The next few years will undoubtedly inflict some growing pains on the restaurant industry as it sorts out just how to do this, and some businesses might fold under the pressure. But, taking a look at the new culinary boomtown of “Cap Hill,” it's hard to worry much over the future of restaurants.