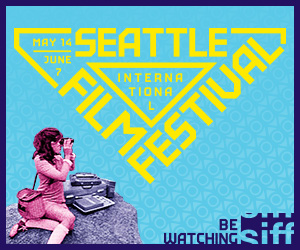 From now until the end of this year's Seattle International Film Festival, I'll be providing regular posts about films, news, gossip, and anything else that looks interesting. I've been attending SIFF since 1988 (the year I moved to Seattle), and wrote a brief overview of my history with the fest here.

This year's SIFF officially began on Thursday with the Seattle premiere of Bridesmaids director Paul Feig's action-comedy Spy, followed by the opening night party at Exhibition Hall (for full series pass-holders and members of the press, it actually began on April 30 with the first week of press screenings).

I'd already caught Spy a few weeks before, and although I enjoyed the movie well enough, I didn't need to see it again, or at least not so soon when there are many others—like a staggering 449 others*—that I haven't seen yet.

Every year, Poppy calls Jay before the opening night party, so they can coordinate their nail polish (if you can't tell from the photo, 2015 = silver). KCF

On the way into the party, I ran into Poppy, a SIFF attendee since 1978, who said she left Spy "after the third poop joke." I don't recall any excrement references, which is hardly my idea of a good time either, so I'd guess she's referring to the hemorrhoid cream and other toiletries Melissa McCarthy's character carries in her purse on her maiden spy mission so that observers will think she's just a frumpy vacationer on holiday in Europe. Other people, like Christopher, really enjoyed the movie. It opens in Seattle on June 5.

And now for some weekend picks:

I haven't seen 1,001 Grams yet, but I love the description, which involves romance and measuring devices, and any film from Norwegian director Brent Hamer is worth seeing. I quite liked his Bukowski adaptation Factotum with Matt Dillon—who's currently starring in M. Night Shyamalan's limited-run Blake Crouch-inspired series Wayward Pines, which premiered Thursday on FOX. (It looks like Twin Peaks Lite, so I plan to at least sample the pilot.)

Bill Pohlad's bifurcated Brian Wilson's biopic Love & Mercy, looks like a can't miss, and Paul Dano has been receiving raves for his turn as Pet Sounds-era Wilson. John Cusack, who plays the Eugene Landy-era iteration, has garnered more of a muted response, but my friend Bill believes he deserves more credit for his work. It's the less glamorous part; maybe it was also more of a challenge? Oren Moverman, who penned Todd Haynes's kaleidoscopic Dylan portrait, I'm Not There, co-wrote the script. Another plus: music heads report that the studio scenes have a documentary-like realism (expect appearances from Van Dyke Parks, the Wrecking Crew, etc.).

French filmmaker François Ozon has been playing with gender and sexual orientation since 1997's See the Sea (the feature followed a series of shorts). He's always been a formalist in terms of his filmmaking—carefully-arranged compositions, an unhurried pace, etc.—and his Ruth Rendell adaptation, The New Girlfriend, represents one of his most elegant films. Granted, there was a guy at the press screening who giggled all the way through. Nervous laughter, perhaps? The story, which revolves around a widower and his alter ego, offers a career-best performance from Romain Duris, who's hardly a slacker among actors (The Beat That My Heart Skipped, Mood Indigo, etc.). I wasn't previously familiar with Anaïs Demoustier, who plays his wife's best friend, but she proves a strong foil. The way Ozon collapses and dissolves the boundaries between male and female, gay and straight, and transgender and cisgender, is both fascinating and admirable.

There are other weekend films that look fantastic, but I'd rather stick to three for now. Look for more recommendations in the days ahead.

Find more films in SIFF Notes, which we'll be updating constantly throughout the fest. Got a tip, have some gossip, heard some rumors, or know some info that needs sharing? Drop me a line at SIFFtips@thestranger.com.

* By the end of the fest, I won't have seen nearly that many films. Has anyone—could anyone—seen 450 films in 25 days? I love film, but I like to eat and sleep, too. And to not walk around looking like a zombie. Or like the characters in the documentary Cinemania, who do nothing but watch movies every day. They're not exactly sane.