In Writing News: Hemingway Punches Poet in the Face, Obama Takes a Jab at Bill Clinton Over Twitter 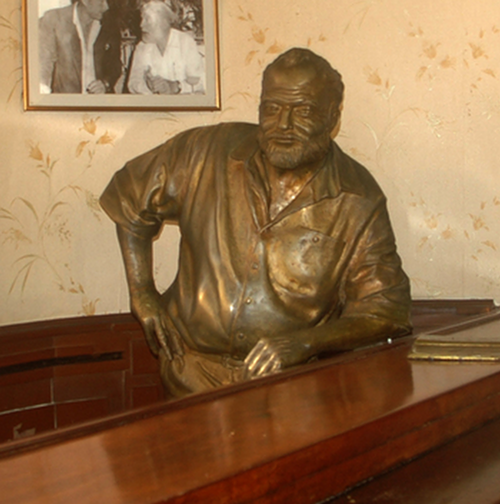 Go ahead. Punch me. I'm a fucking bronze statue. 360b / Shutterstock.com

• Did you know that Ernest Hemingway punched modernist poet Wallace Stevens in the face? The setting: Key West, 1936. At a party, Stevens makes Hemingway’s sister cry by calling Hemingway “a sap, no man.” Hemingway and Stevens step outside. Stevens swings, misses. Hemingway pops him in the jaw. Stevens throws a counterpunch and breaks his own hand. The two make up. Stevens tells his wife he fell down some stairs.

Good question, @billclinton. The handle comes with the house. Know anyone interested in @FLOTUS?
— President Obama (@POTUS) May 18, 2015

Point goes to Obama. Raise your hand if you were the Clinton aid who thought up that one and I will take your place on the campaign trail for a day.

• More breaking Twitter news: Do you know the real name of the sad genius behind these tweets?

For nearly three years now the Internet has wondered about the identity of this funny but depressing but profound voice of millennial angst. Buzzfeed was convinced it was Lana Del Ray. Over at the Daily Dot, Nimrod Kamer called the poster "the most genuine person on Twitter." Vice fell in love and gave this person a column, where she's been writing about her struggles with mental health. (If you don't know, check out stories like "This Week in Panic" and "Keep Your Friends Close but Your Anxieties Closer." Now you know, and you are sadder but more real for knowing.)

Today, the anonymous writer has revealed herself to be none other than Melissa Broder, which would make complete sense to you if you were tapped into the small press lit scene. In addition to being an essayist who is very funny on Twitter, Broder is a fine poet whose latest book, Scarecrone, is available from Publishing Genius.

• Did someone say millennial angst? Co-writers Christopher Robinson and Gavin Kovite are launching their novel, War of the Encyclopaedists, at Elliott Bay on Wednesday, May 20 at 6:30pm. The book’s about two twentysomething buds living on Capitol Hill in Seattle. One of them gets deployed to Iraq, the other deploys himself to the quagmire that is academia. In order to keep tabs on each other, they write a Wikipedia page about themselves and edit it as their lives change. People like Mary Karr and Benjamin Percy say the authors give us a good look at the psychology and aesthetic of millennials. They’re using phrases like “coming of age in a time of YouTube” and “generation-defining novel.” I wonder if ancient Roman reviewers could get away with saying, “In his latest novel, Propertius shows us what it’s like to come of age in the time of papyrus and hinges!" I digress. The novel seems promising.

• Got a short story rotting on your hard drive? Send it out to Writer’s Digest, Glimmer Train, or Salamander before May 31! Oh yeah, and poets: Copper Canyon Press is open for submissions.