Come for the Michael Bolton shirt; stay for the crucified piñata, the Jesus belt buckle, and the Rasta socks.
Sponsored

Fine, I'll explain why I wasn't able to see Robert Plant and the Sensational Space Shifters. Sunday evening, there was a snafu upon entering Sasquatch! Music Festival that involved one member of our party being unable to obtain a wristband until the following morning. (The computer was off-line?) Not wanting to ditch anyone to fend for themselves in the Porta-Potty parking lot, we did the only thing we could do. We drove back to our hotel in Quincy, Washington, took acid, and sang YouTube karaoke at the only open alcohol-serving business within walking distance: a cavernous Mexican restaurant that appeared to be running on a generator. All in all, it was the best day of Sasquatch! 2015 ever.

The second-best day of Sasquatch! was Monday—the day with the most music I wanted to see in one 12-hour period, from THEESatisfaction to Run the Jewels and Kendrick Lamar. Plus, the last day is totally sparse-Squatch. There are still more people in one area than seems humane, but they don’t seem as interested in puking on you.

• The overwhelming beauty surrounding the Gorge. As GOD’S GIFT pointed out, “Eastern Washington is the shit.” 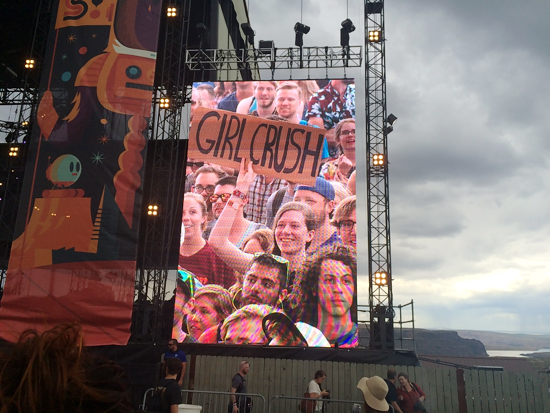 Crushing on Courtney Barnett <3
• Courtney Barnett and her band playing a no-bullshit rock set under graying skies and light rain. The audience included a crowd-surfing blow-up doll and a woman holding up a GIRL CRUSH sign written on the back of a Franzia box.
• Sharon Van Etten’s woozy, salty voice lulling the smiling, exhausted-looking crowd into cocoons of emotion.
• Killer Mike allowing me to hug him. My friend told him how important his words on police violence are, to which he replied, “We’re all on this spinning rock so we might as well try to get along. (Sob.)
• Speaking of Killer Mike and Run the Jewels, El-P’s best quote from their rad, positive set was something like, “Some people wonder how we did it. How a year or two ago, no one knew who we were. Well, we went to the invisible pawnshop and we got these invisible golden 36" chains around our necks. You can wear that shit too! Fuck it!”

• The gatekeeper who grimly scanned our wristbands and said, “These scans are tracking your every move around the festival.”
• Managing to sunburn only one part of your body while everything else remains pasty. KNEES. Fucking SUNBURNED KNEES.
• Tweenage audience members and their ability to slyly worm their way in front of you, arms locked with 16 of their friends.

• Still with the flower crowns, but more with the blankets and ponchos made out of blankets. 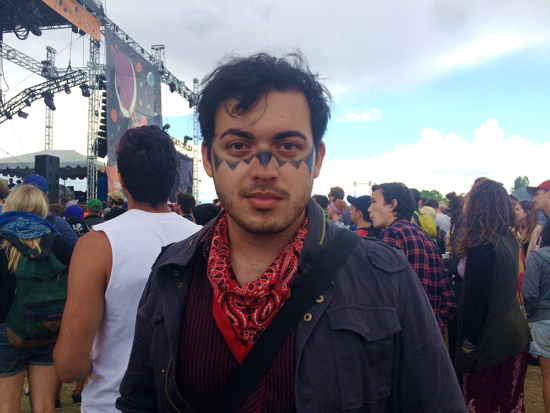 At every festival, until the end of time. 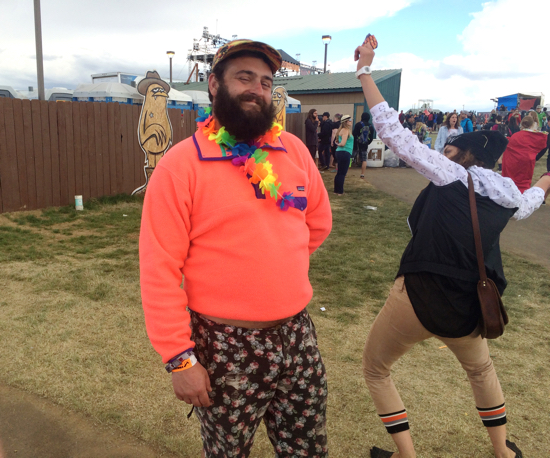 Hot coral Patagonia man is everything a Northwest musical festival could and should be (bonus points for whatever is going on next to him).

ABOUT KENDRICK LAMAR, THOUGH:

Make no mistake—“King Kunta” boomed from the campground this weekend, reminding everyone that Kendrick Lamar would be Sasquatch! 2015’s closing superstar.

My festival mates and I had been discussing Kendrick’s Sasquatch! show for about a month prior—specifically the new album, To Pimp a Butterfly, and how it would be performed at Sasquatch! To quote Larry Mizell Jr.’s excellent review of the album, “Kendrick has made the definitive statement in black music of this era... addressing the deepening ugliness of where we're all at in America.” Technical challenges aside, this is a majorly complex album.

The idea of Kendrick performing To Pimp a Butterfly to a crowd made predominantly of white dudes who can afford a $450 wristband—screaming the n-word because it’s in the lyrics—held the potential for him to be understandably abrasive.

But Kendrick came out (dressed in all denim—ssshhh, he can do whatever he wants) and put on an excellent show. As vivid, homemade-looking videos played, he seemed to genuinely exude kindness and respect for the crowd. The show focused heavily on Good Kid, m.A.A.d. City, with hits like “Swimming Pools (Drank),” “Bitch Don’t Kill My Vibe,” and “m.A.A.d City.” He played the latter three times—once on his own, then twice more after offering the mic to two audience members who pulled it off without even peeing their pants in the process.

Near the halfway mark, he played “Alright” from Butterfly before promptly returning to his older stuff. Then it dawned on me, like holy shit, he’s not going to play the new album. Problem solved. It made so much sense. He acknowledged the fans and put on a fun, super entertaining show for everyone to party to. It didn’t come across as a “fuck you,” but it was a powerful statement nonetheless.

Of course, we could chalk it up to some kind of “studio albums are too hard to reproduce in a live setting” excuse, but I think it’s worth it to ask, “Why didn’t Kendrick Lamar perform To Pimp a Butterfly at Sasquatch!?” Perhaps he's hoping the crowd might connect the dots and reflect upon this question themselves.