The Morning News: Ban on Smoking in Parks Moves Forward, Olympia Heads into Another Special Session

One step closer to being banned after last night's parks board meeting. Sabphoto/Shutterstock
Sponsored

Parks Smoking Ban Likely to Take Effect in Early July: Heidi Groover reports: "The Board of Park Commissioners voted last night in support of a ban on cigarette smoking in city parks, but the language of the ban they're supporting has undergone significant changes since an earlier proposal. After criticism from advocacy groups, like Real Change and the ACLU, about how the ban could disproportionately affect homeless people, the park commissioners removed a $27 smoking ticket and clarified that people will not be excluded from parks for breaking the rule. However, after one verbal warning and two written warnings, smokers can be arrested. (This mirrors the process for breaking other park rules.) The city will also analyze demographic data of those who are arrested. The parks superintendent is now expected to approve the rule, and it will take effect in about a month."

Auburn's "War on the Visibly Poor": "Many cities around Washington State make it a crime to do things that everyone does but that homeless people have to do in public—like sitting down, sleeping, going to the bathroom, or asking for help," reports KUOW. "No city has more laws against these activities than Auburn, a southern suburb of Seattle."

How Our State Robs from the Poor and Gives to the Rich: The Washington Post called out Washington State earlier this week as one of the states in which tax policies "actually undermine the federal government's anti-inequality measures." (But we already knew that.)

"What is wrong with you people?" Office of Governor Jay Inslee

Another Special Session for Olympia Lawmakers: "With state lawmakers still squabbling over how to fund government, Gov. Jay Inslee Thursday ordered a second special legislative session to start Friday," the Seattle Times reports. "If there’s no new budget in place by July 1, the start of the new fiscal year, some government services could shut down."

Lusty Lady Building to Become Boutique Hotel: Because there aren't enough signs of the changing city around.

Shell Criticized for Risk Taking with 2012 Arctic Drilling Rig: "A new report from the National Transportation Safety Board says poor planning and risk assessment by Shell Oil led to the wreck of the Kulluk oil rig off the coast of Alaska in December 2012," KUOW reports. "The NTSB report comes out as Shell is gearing up to hunt for oil again this summer in the Arctic Ocean."

The month of May will come to a close with highs in the 70s. Sleepy Weasel Entertainment/Shutterstock

May Is Going to End Warm: "High temperatures more than 10 degrees above normal are forecast through the weekend as May comes to a sunny, dry close around the Puget Sound area," the Seattle Times reports. "At Seattle-Tacoma International Airport, which has had no measurable rainfall since May 14, a high temperature of 78 is forecast for Friday, before dropping back to 74 on Saturday and 75 on Sunday."

The American Economy Is Looking a Little Weak: "The economy got off to an even weaker start this year than first thought, the government reported Friday, as economic activity contracted amid a disappointing trade picture and continued caution on spending by businesses and consumers alike," the New York Times reports.

And Spotted at Jack Block Park, Site of Some Anti-Shell Protests: 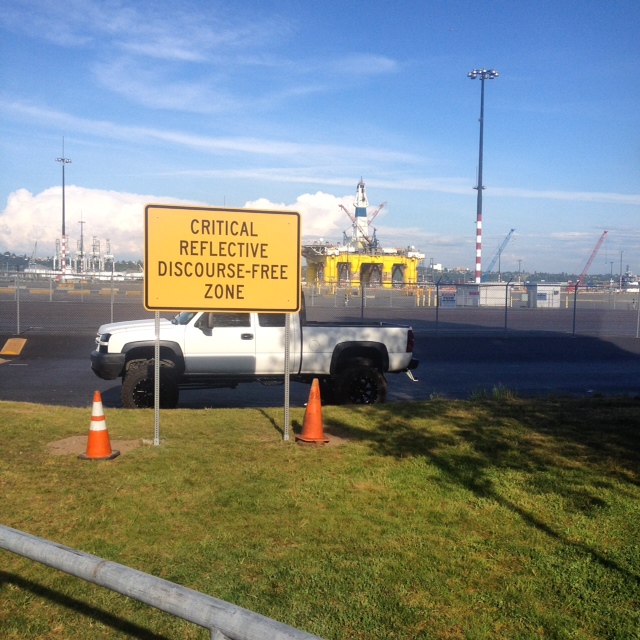 Perhaps related to this and this? Margaret Ganong
The Stranger depends on your continuing support to provide articles like this one. In return, we pledge our ongoing commitment to truthful, progressive journalism and serving our community. So if you’re able, please consider a small recurring contribution. Thank you—you are appreciated!
CONTRIBUTE NOW

Sara Nelson’s Sobriety Changed the Way She Thinks About the Homelessness, But It Hasn’t Changed Her Policy Prescriptions

SIFF 2021 Review: THERE IS NOT A SINGLE CHILL MOMENT IN THIS ENTIRE MOVIE!!!

Slog AM: Cops Kill Another Man in Minnesota, Gunman Injures Four in the Central District, and the "White Lives Matter" Rally That Wasn't