What is going on here? Courtesy of the artist and Winston Wächter Fine Art
Sponsored

So many questions about Boston-based artist Ethan Murrow's drawings at Winston Wächter Fine Art this month. What are those men doing? Who do they work for? Why is there a painting underground? How big is that painting? What is the man inside the painting doing? What does the number 136 (just under the arch, to the right of the light shaft) refer to? Why is this drawing called Columbia River Beehive? Looking at it, I feel like I'm in a parallel universe where all I get to see of how the world works are these ultimately mystifying details.

Yeah, no idea on this one, either. Courtesy of the artist and Winston Wächter Fine Art

Here we go again: Are those people leaning toward the pyramid a cult? Are they waiting for something to come out the front door of that pyramid? Is that an ice-skating rink around the pyramid? What kind of religious order or political system is implied?

There are several drawings in this vein, along with a few directly political ones and a few overtly whimsical ones. Some blend modern technology with old paintings and old traditions, and in each of them, human beings are dwarfed by forces that often seem powered by other humans. Whoever is in charge is not pictured. The authoritative aerial perspective promises a god's-eye view only to thwart it.

The destruction of an antiquity, carted off by Blackhawk. Courtesy of the artist and Winston Wächter Fine Art

The sculpture carted off by a Blackhawk military helicopter above is either being saved or being stolen. Whatever's happening on the ground is not good. Whose war is it?

This is Murrow's second show at the gallery. His first in 2011 was a more playful series of surreal fantasy drawings starring Murrow and his wife Vita Weinstein Murrow as old-timey explorers.

Everything Murrow makes is going to be likable, because it doesn't take itself too seriously, and he's damn fine at drawing. But I prefer the pieces that are mysteries right out in the open. Maybe I'm the only one getting constant reminders that the everyday world is a mystery right out in the open, or maybe I've got it especially on my mind because every other corner in Seattle seems to be a construction site for a building I haven't seen yet and will probably never get inside. What do those workers think of what they're building? Do they know more than their little sections? 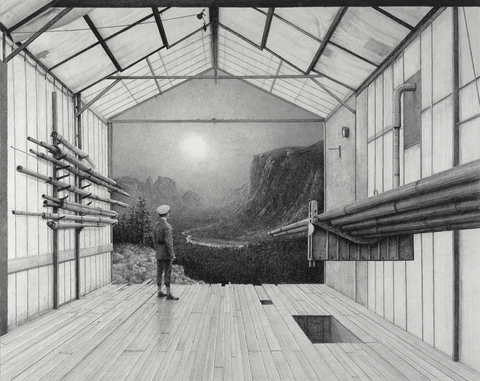 Maybe this guy is in charge. He frightens me a little. Courtesy of the artist and Winston Wächter Fine Art
Sponsored