Wait, Are We Hippies Now? AMMA the "Hugging Saint" at Xfinity Arena

Last Sunday, the renowned humanitarian and spiritual leader AMMA was at Everett’s Xfinity Arena giving hugs and “darshan.” Her real name is Mata Amritanandamayi, and she is known as the Hugging Saint. She will hug anyone who wants a hug. In the past 40 years, AMMA has physically hugged more than 34 million people. For the six hours Kelly O and I were there waiting to hug her, I’m not exactly sure what happened, but it was powerful. The 61-year-old Indian guru from Parayakadavu is a powerhouse of positive vibrations.

To hug AMMA you needed a numbered token, which was free. The whole thing was free. Tickets were not required. We got there at 6 p.m., and at 10:30 p.m. they hadn’t even started forming the line to hug her. Our hugging section was “H5”. When AMMA starts hugging, she sits there all goddamn night until every person who wants a hug gets one...

Not a single Budweiser was served at this event. Kelly O

AMMA will sit giving darshan up to 23 hours without peeing. And she's diabetic. Sometimes she gets insulin. Every once in a while, she has a spritz of liquid or takes a bite of cookie. There are multiple fans blowing air and space heaters. On a long day, where the crowds are bigger, she can hug 20,000 people. The Xfinity Arena was about a third full. The stage for AMMA and her entourage was not small.

Photo of AMMA in the 2015 Program Guide.

The program we attended began at 7 p.m. It started with a satsang, or sermon, by one of AMMA’s head disciples (who looked like Wayne Coyne of the Flaming Lips). There was talk of karma and existence. He was low and flowing with his voice close to mic and his accent boomed around the acoustics of the space. AMMA was seated up on a riser, surrounded by disciples in orange robes, children, and musicians. Music was provided by a 20-piece band. It was a big sound. Holy, Eastern, desert tones. Ten tabla and percussion players, a harmonium, and around eight vocalists, including AMMA. She has a really good voice—smoky, fluid, and furtive. As she sang, she fanned her hand forward, ushering the sonic energies off the stage onto the crowd. Her eyes seemed closed most of the time. Kelly O said she thought AMMA sounded sort of like Janis Joplin. Then there was meditation. Loud “OOOOHMS” were chanted. I looked up at the scoreboard in the center of the arena and there were images of white flower petals falling. Then the darshan commenced.

AMMA’s image on the scoreboard in the middle of the arena didn’t seem out of place. She’s commanding in her presence, even pixelated on a scoreboard. 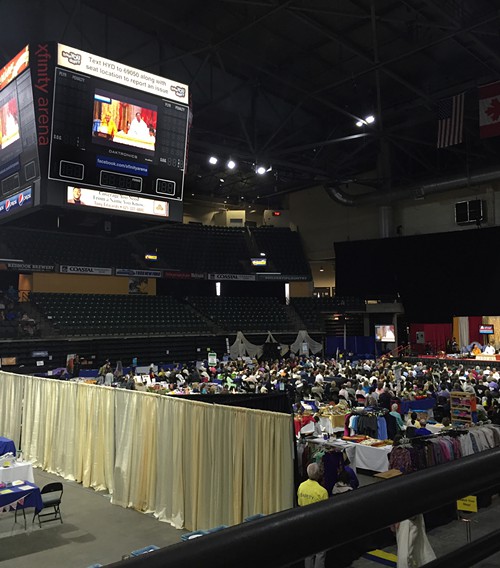 The pixelated AMMA from where we sat in the bleachers. Kelly O

I was skeptical at first. But by the time I got my hug, I didn’t want it to end. When our hug section got close, we came down from the upper level seating to the floor. On the floor, there were food and items for sale. They do food the entire time. Adult baby food, and curries, and cauliflowers. Kelly O said, "That was a delicious plate of oatmealy mush. It’s kitcheri.” They sell bags, AMMA dolls, pictures, T-shirts, instruments, spices, incense, calendars, and everything AMMA. 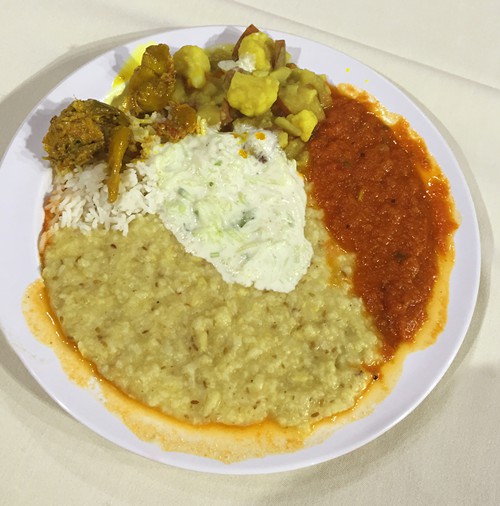 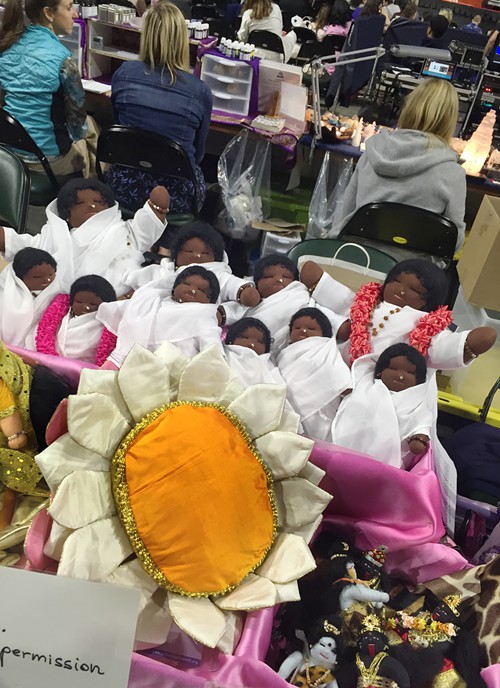 Kelly O was wearing a Nirvana "smiley-face" shirt, and received at least three compliments. Also, many Jesus-looking men in white robes strode gracefully and calmly about the arena. 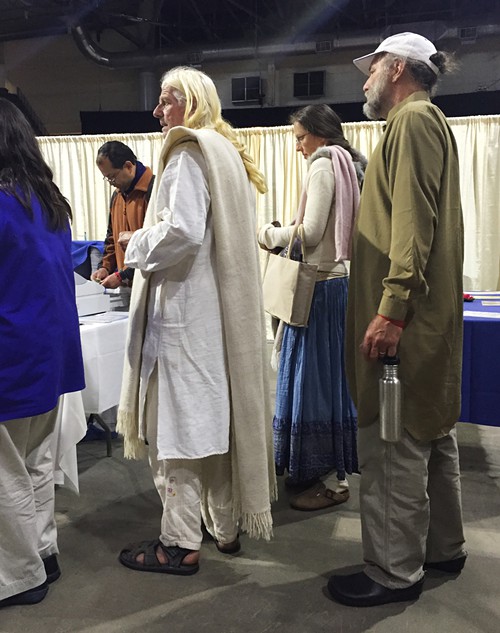 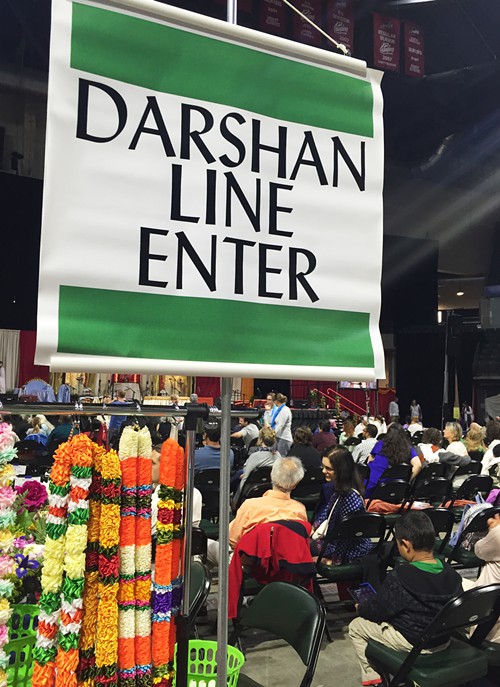 The closer you get to AMMA the faster your heart beats. There’s a crowd of people surrounding AMMA—wise-people, helpers, disciples, guiders, volunteers, people just soaking up her energy.

When it’s your time for AMMA’s hug, you are instructed to put your hands on either side of AMMA’s chair from your kneeling position. So much buildup goes into it. I had a picture of my mother for her to bless. There’s commotion with people getting up from their hug, going in and out. Then it’s your moment. The band is playing loudly through the big system. Tablas and chanting swirl. You’re in the middle of an arena where they play hockey. Then there’s AMMA before you. A handler ushers you forward and you bury your head into the sanctity of her chest. AMMA puts her arms around you and turns your head so one ear faces up. Then she chants softly right into your ear, into your head, into your world, words that translated to “my son, my son, my son.” When I heard her voice everything vanished.

It seemed like I was in the field of her embrace for an hour. Then it was over, I pulled back and looked into her eyes. Her smile and face and gaze are etched from another age. She’s pure good. I realized it then. “Can you cure my mom?” I thought, “Can you make it so she doesn’t feel pain?” I wanted to cry but was embarrassed. She’s hugged all those millions of people. It all seemed too big for now. She handed me rose petals and a Hershey’s kiss, and the guy behind her who was like the umpire nodded. Then I navigated back out through the gathering onstage, walked down the stairs, and put on my shoes. Two Jesuses with matching man-buns and beige robes walked by under the arena’s Budweiser sign and smiled. Slowly I began to hear the world again. Thank you, AMMA. Thank you for my hug. 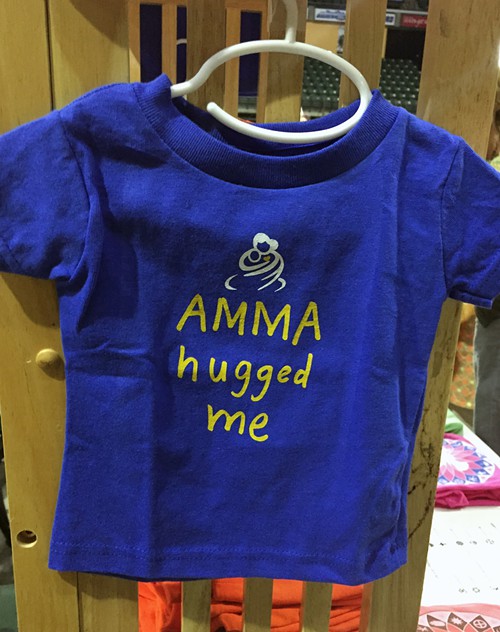 Kelly says: After my hug, I felt the same, gooey, ecstatic rush I've experienced after acupuncture. Thank you, AMMA. Kelly O
The Stranger depends on your continuing support to provide articles like this one. In return, we pledge our ongoing commitment to truthful, progressive journalism and serving our community. So if you’re able, please consider a small recurring contribution. Thank you—you are appreciated!
CONTRIBUTE NOW