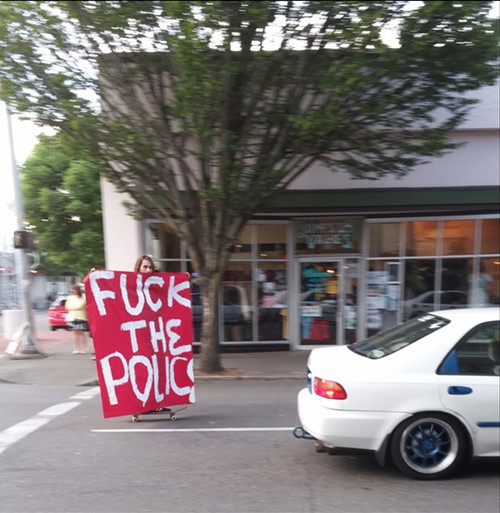 Shortly after the shooting of the two unarmed men in Olympia, this young skateboarder was seen protesting the police. Charles Mudede

David Beninger a Seattle lawyer representing the stepbrothers who were shot by an Olympia police officer after allegedly attempting to shoplift from a Safeway, tells KOMO that his clients (Andre Thompson, 24, and Bryson Chaplin, 21) not only did not attack officer Ryan Donald with a skateboard, as Olympia police chief Ronnie Roberts said in a press conference on May 21, but were shot multiple times in the back .

"Investigators said it would be misleading to describe it as being shot in the back," KOMO reports. But that is what Chaplin's attorney is claiming—not only that they were shot in the back but that one of them, Chaplin, was hit five times and may never walk again. One of the bullets reportedly "lodged against his spine." The other brother was shot in his side, according to investigators.

The details are not fully clear, but it is certain that Chaplin and his brother were shot by an officer, and they did not have any weapons on them. As for the claim that the stepbrothers attempted to steal beer from the Safeway, if that is proven to be true, maybe people should really think twice before calling the police for minor or dumb shit. Maybe as citizens we need to understand that when we call the cops we are introducing guns into a situation that has no guns.

One only has to watch the seven-minute video of the mayhem at a recent Texas pool party to see that the police—who, according to a witness, showed up after a tussle between a white woman and a black woman—made matters far worse and far more dangerous. If you're short on time, jump ahead to the 3:00 mark. A police officer appears to get not only physically aggressive with a young black woman in a bathing suit, but then appears to pull a gun on two young men who did not threaten him with guns. The two men ran. I don't think it's an exaggeration to say they ran for their lives.

When you call the police, you are also calling their guns.