The Morning News: Five Raging Grannies Are Chained to One Another at Terminal 5

Among the protesters locked together at Terminal 5 this morning: five Raging Grannies with knitting supplies. SB

Eleven People Were in Lock Boxes, Barrels, and Chains Down at the Port: Including five Raging Grannies, who have rocking chairs, knitting accessories, and photos of grandchildren and great-grandchildren. Now, six people have unlocked themselves and the Grannies are still deciding whether to stay locked together until they're removed.

Shirley Morrison, 92, Is Knitting for Her Ninth Great-Grandchild, Who Has Not Yet Been Born: And her chair is chained to four other people next to a disabled car (with an activist in a lock box and Kshama Sawant t-shirt) on Chelan Avenue SW. "If we don't keep those fossil fuels in the ground, if we take them out and burn them, we're toast," Morrison says. 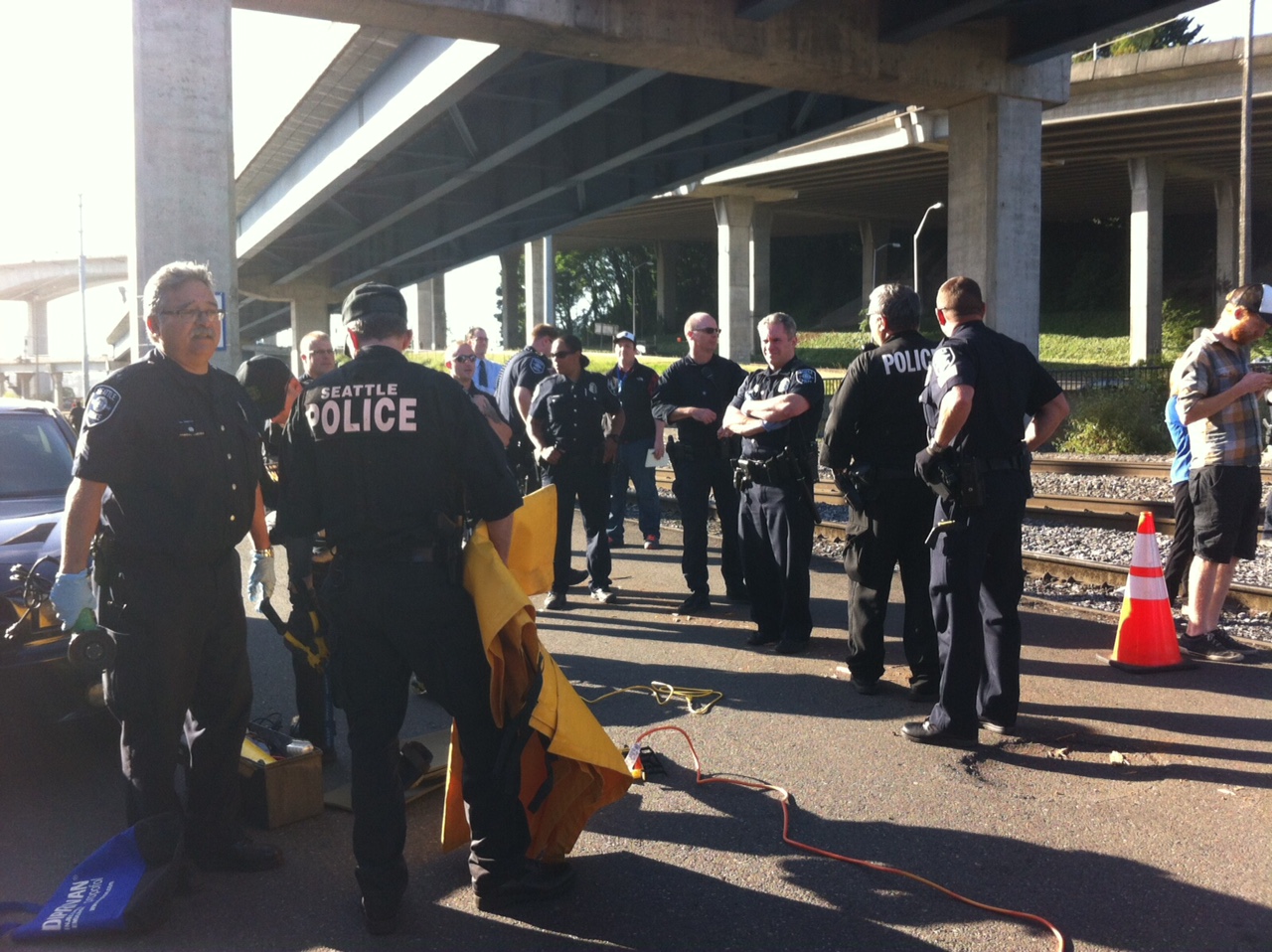 There are fewer cops are on site today than at the protests over the weekend. A BNSF spokesperson says trains have been stopped since 6:30 a.m. SB
There Weren't That Many Police Here When I Arrived at 6 A.M: Just some port police officers here and there.

Maybe They Figured All Those Ragtag Protests Over the Weekend Were the End of Their Problems? Who knows.

A Lot of the Same Faces Here, Sure: But a man who had driven to the T5 flyover to pick up his son, a security guard, said he was in solidarity with the cause, despite having to turn around because of the protests. He didn't want to be identified for fear of reflecting on his son, but he said, "We've been on oil for too long."

Unions, Transit Riders, Will Rally Outside of Amazon's Shareholder Meeting Tomorrow: They're asking the e-commerce behemoth to sponsor Metro's new low-income fare program, help the city develop affordable housing, hire more women and people of color, and cancel a contract with a security contractor that has been accused of poor labor practices.

Five Hundred People in Pioneer Square Were Evacuated at a Horrible Hour This Morning Because of a Natural Gas Leak: The Morrison Hotel and the Smith Tower were evacuated at 3 a.m., and people were told they could go back to bed at 4:45. The fire department, according to KIRO, said the leak started at the Morrison Hotel.

City Hall Considers the State's Rent Control Ban: The city can't do much about the ban unilaterally, of course, but it can launch a debate. Groover gets into what the rent control fight has become here.

A Man Smashed a Transgender Person's Head into Capitol Hill Pavement on Sunday: That's the third reported case of violence against an LGBT person in the neighborhood in a week. Luckily, a waiter named Vincent Renart interrupted the attack.

Were those bus announcements over the weekend annoying or what? Ansel Herz

Those New Bus Announcements Were So Annoying That Metro Canceled Them After Only Two Days: After a flood of complaints from drivers and passengers about the volume and frequency of bus announcements instructing riders to "stand behind the yellow line," "hold on," and be aware that surveillance equipment would be monitoring "illegal activity," King County Metro took the new voice recordings offline this past weekend. Here is their apology.

Mayor Ed Murray Went to the West Bank and Met with Palestinian College Students: He also hung out with the Palestinian Liberation Organization's Saeb Erekat. Oh hey, Eli Sanders led this Seattle Times project on the history of the Israeli-Palestinian conflict you should probably read.

UPDATE: The Seattle Police Department clipped through the Grannies' chains and sawed through their lock boxes. A media liaison for the activists on the scene said that the Grannies would be taken down to the Southwest Precinct and released. We're following up with SPD for details.