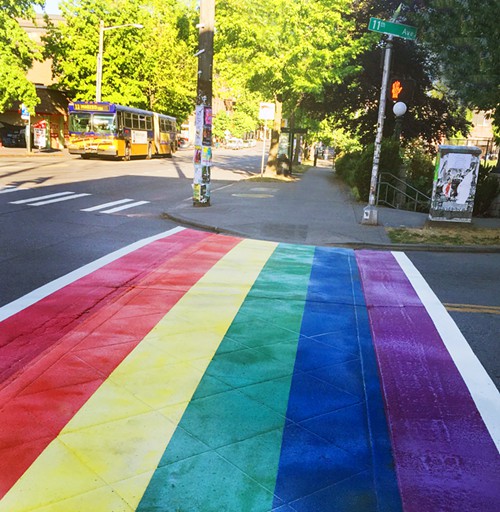 Check Out Pike/Pine's New Pride Crosswalks This Morning! Municipal Pride elves painted them last night. They could last up to five years, according to KIRO, and they're paid for by developer fees. Pride is coming. Have you bought your body paint yet?

US Conference of Mayors Calls on Obama Administration to Fix Somali Remittance Crisis: The adopted resolution was sponsored by Seattle's very own Ed Murray and Betsy Hodges, the mayor of Minneapolis. Ijeoma Oluo has written about how the Merchant Bank of California, responding to pressure from the US government, shut down its transactions between Washington State and Somalia back in February. The result has created a crisis for Washington's large Somali community trying to send funds back home to their families. Read the new resolution here.

Democrats' New Budget Plan Has No Carbon Revenue, No Capital Gains Tax: So two of the most promising ideas Governor Jay Inslee offered at the beginning of the session have been cut. Instead, the Dems' new plan gets rid of several tax breaks, including exemptions for bottled water and oil refineries. The budget plan would freeze college tuition for two years, increase K-12 funding, and give teachers a higher cost-of-living pay raise than Republican plans, reports the Seattle Times.

Researchers Will Look for Traces of Pot in Poop: The federal government is funding a study to see if pot legalization has affected how much people use marijuana in two Washington cities. How can they tell? Sewage samples! Which cities? We don't know yet.

UW Psychology Experiment Finds That Guys Exaggerate Their Height When They Feel Their Masculinity Is Threatened: Associate professor of psychology Sapna Cheryan gave test subjects a fake handgrip test (she scored the idea from a men's fitness magazine) and deliberately handed out bogus low scores to the experimental group. Unlike the guys who received average scores, those who received the low scores exaggerated their own heights by an average three-quarters of an inch on a questionnaire. The false low-scorers also said they had more "romantic relationships, claimed to be more aggressive and athletic, and showed less interest in stereotypically feminine consumer products."

Don't Use Your Company E-mail to Arrange Drug Deals: The Everett Herald reports that a group of Boeing employees used their company's texting and e-mail service to sell oxycodone, morphine, Adderall, and amphetamine pills at the Paine Field plant. Boeing has said it fired four people as a result.

Four Flight Attendants Are Also Suing Boeing over Toxic Air: The complaint alleges fraud and negligence over a 2013 incident in which a plane from Boston to San Diego had to make an emergency landing after three flight attendants passed out. The complaint says that the flight attendants still suffer symptoms like dizziness, memory loss, and decreased motor skills.

Water Demand Has Risen 30 Percent in Seattle: Which boosts the water bills. Sadly, at least one Bothell homeowners association is telling its members to keep their lawns green.

Kayaktivists Are Protesting the Noble Discoverer in Everett: The Polar Pioneer wasn't Shell's only Arctic drilling rig. The Noble Discoverer, which has been moored in Everett for several weeks now, could leave at any moment. According to Fuel Fix, the Discoverer racked up more than a dozen safety violations since its US Coast Guard inspection on May 20, but passed its certificate of compliance exam on June 14. After Shell's last attempt at drilling in the Arctic, operators of the Noble Discoverer, Noble Drilling, pleaded guilty to eight felonies related to faulty pollution-control equipment onboard.

South Carolina Will Vote Today on Whether to Consider the Removal of the Confederate Flag: The New York Times reports that South Carolina lawmakers are expected to vote on changing their agenda so they can consider Governor Nikki Haley's call to remove the Confederate flag from the Capitol. In the aftermath of the Charleston massacre, the Post and Courier has also been polling lawmakers on whether they believe the flag, featured prominently in the accused murderer's photos of himself and clearly central to his racist ideology, should be removed.