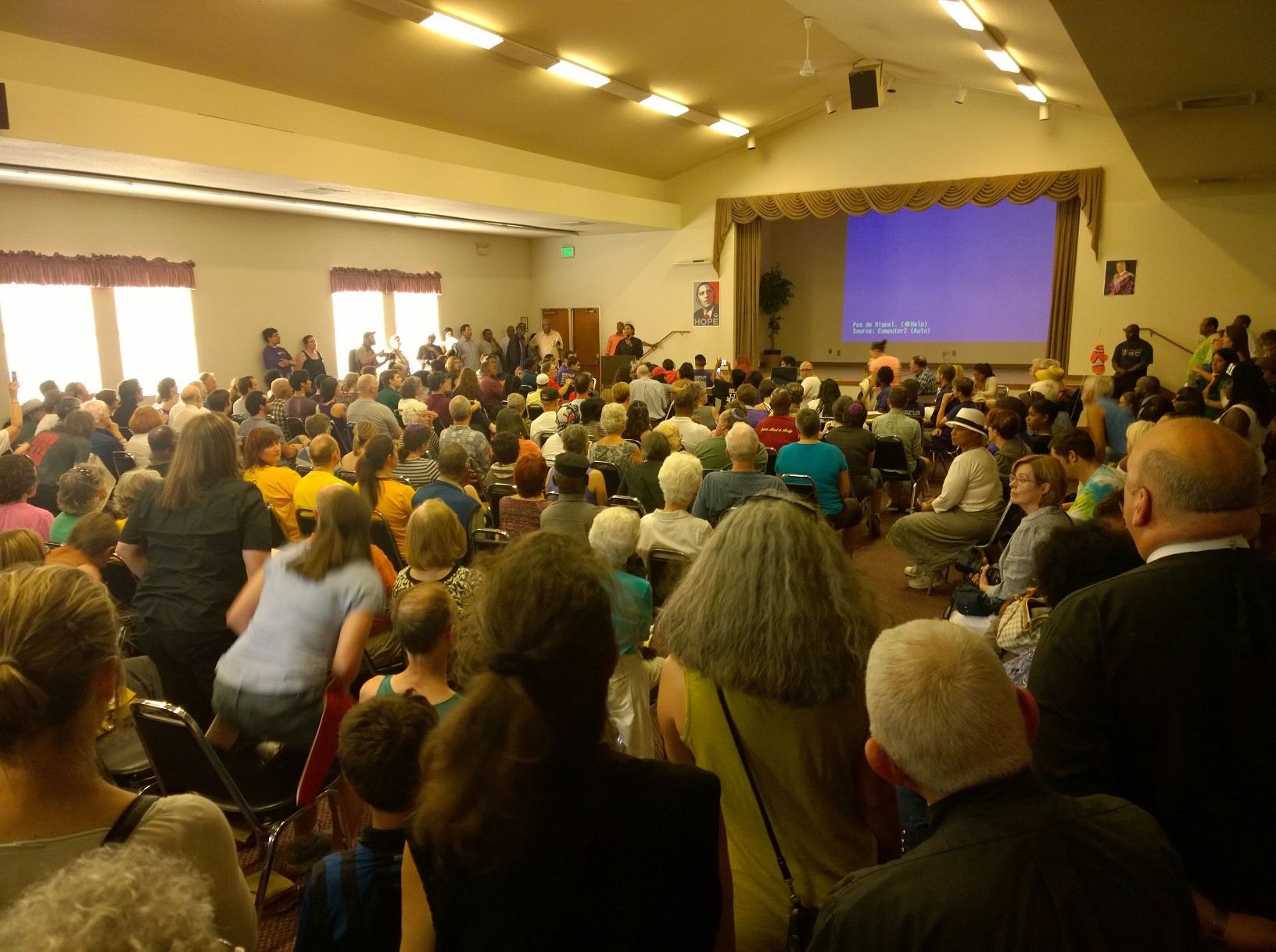 Last night, hundreds gathered inside First African Methodist Episcopal (AME) Church on Capitol Hill, a sister church to Emanuel AME Church in Charleston, North Carolina, the site of a terrorist massacre on June 17. Dylann Roof, the suspect in the case, was indicted today on nine counts of murder. It's not clear why he wasn't charged with terrorism. Among the crowd packed into the sweltering church yesterday, I saw Mayor Ed Murray, city council members Bruce Harrell, Tim Burgess, and Kshama Sawant, and candidates Tammy Morales, Josh Farris, John Roderick, and Bill Bradburd. Seattle-King County NAACP head Gerald Hankerson drew applause when he said the attack on the church represented terrorism. "This is not black or white," he said. "This is white supremacy versus humanity." Ansel Herz
Sponsored

The march wound over the hill and down 23rd Avenue to Mount Calvary Christian Center. "We have to acknowledge that white churches have work to do," said one white pastor, "to hold our communities accountable for the evil they do and the evil done on their behalf." Ansel Herz 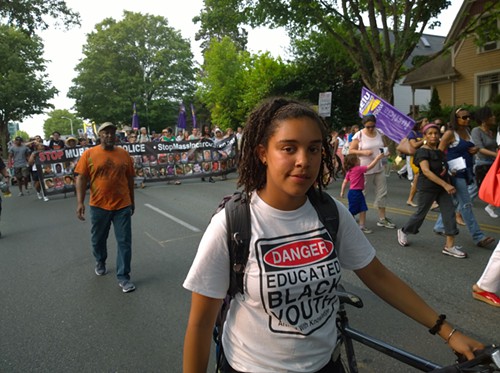 "We're in the middle of civil rights part two," said Sarra Tekola, a recent graduate of the University of Washington. "Nine churches have been burned... we're being attacked by vigilantes, we're being attacked by the police. The Voting Rights Act has been gutted. Affirmative action has been banned in this state. We're being pushed out of Seattle. It's time that we really mobilize and start to do something about this." She said that racism in this city, "like most things in Seattle," is passive. Ansel Herz 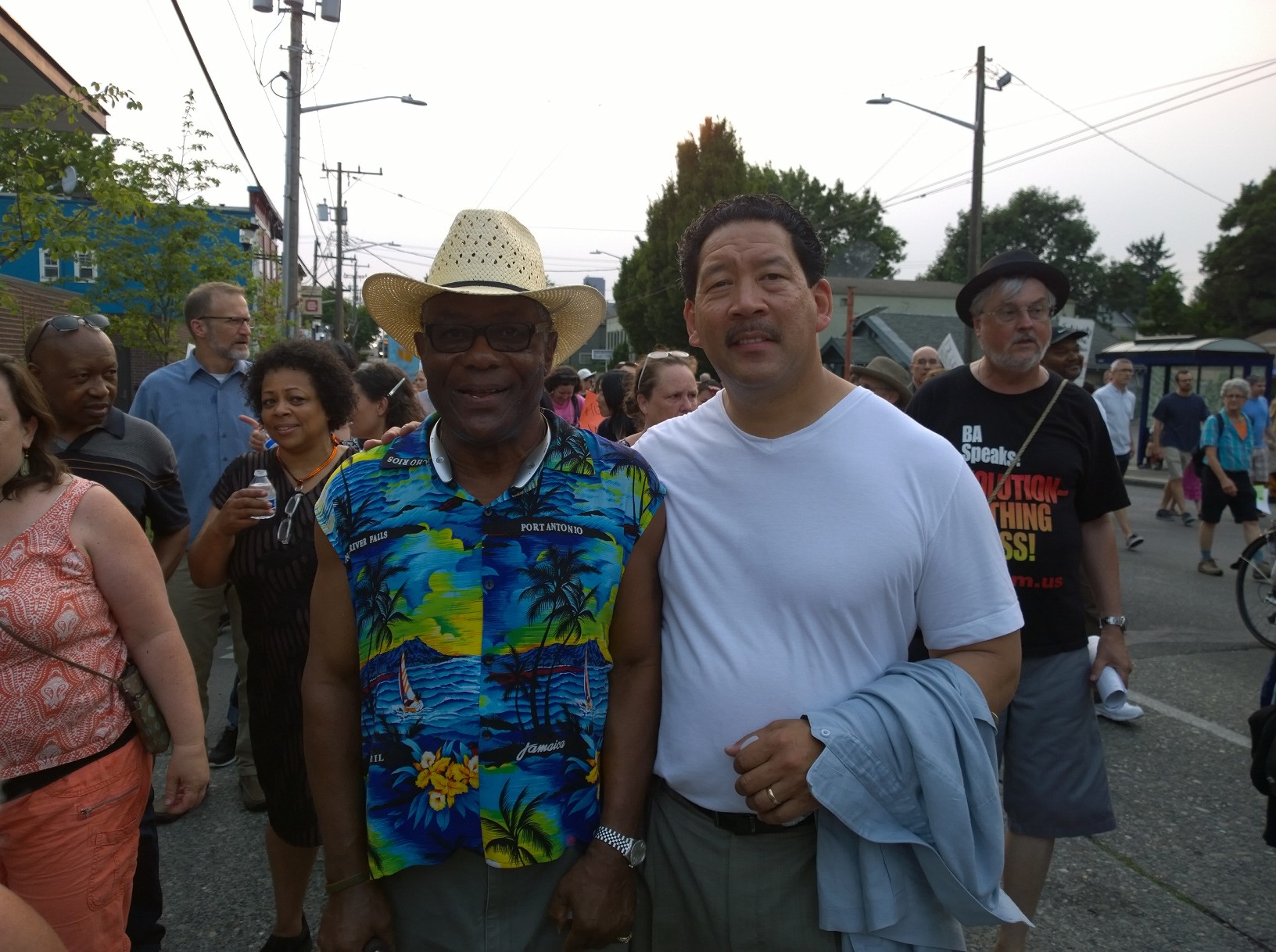 Council Member Bruce Harrell marched alongside William Wingate, the man singled out for arrest last summer by Officer Cynthia Whitlatch. Wingate will turn 71 years old in September. But the military veteran, a longtime member of First AME Church, looked sprightly as he marched more than two miles from the church to MLK Memorial Park. He uses a cane now, instead of the golf club that Whitlatch confiscated from him during the arrest. Harrell, also a member of the church, told me the police escorting the marchers from the sidelines on bicycles were missing an opportunity to build community trust. "They should be walking with us, shaking hands," he said. "They should have been able to surmise by now that it's not a violent march." Ansel Herz 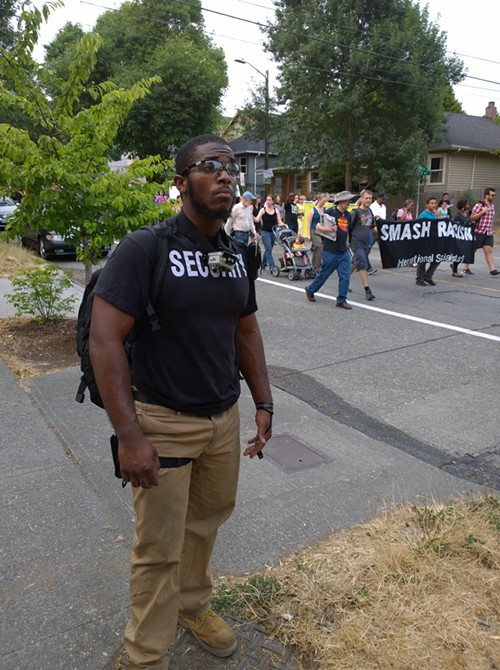 This is a 30-year-old student who identified himself as "Ox." He was walking next to the marchers, along with another man in a black "SECURITY" T-shirt. He said a representative of the NAACP had asked them to provide security along the march route. "We don't trust the cops," he told me. Ansel Herz 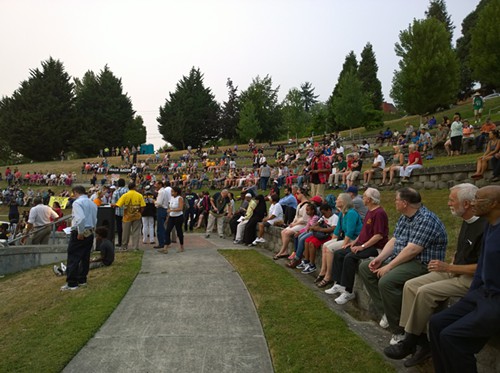 The group gathered at MLK Memorial Park as speakers took to the microphone. "We need the good white people to stand up," said Reverend Harriet Walden from Mothers Against Police Brutality, echoing a call she made last year after the pepper-spraying of an innocent black bystander at Westlake Center. "This is not our burden. We were stolen. Black people have been fighting for freedom for 500 years." Ansel Herz 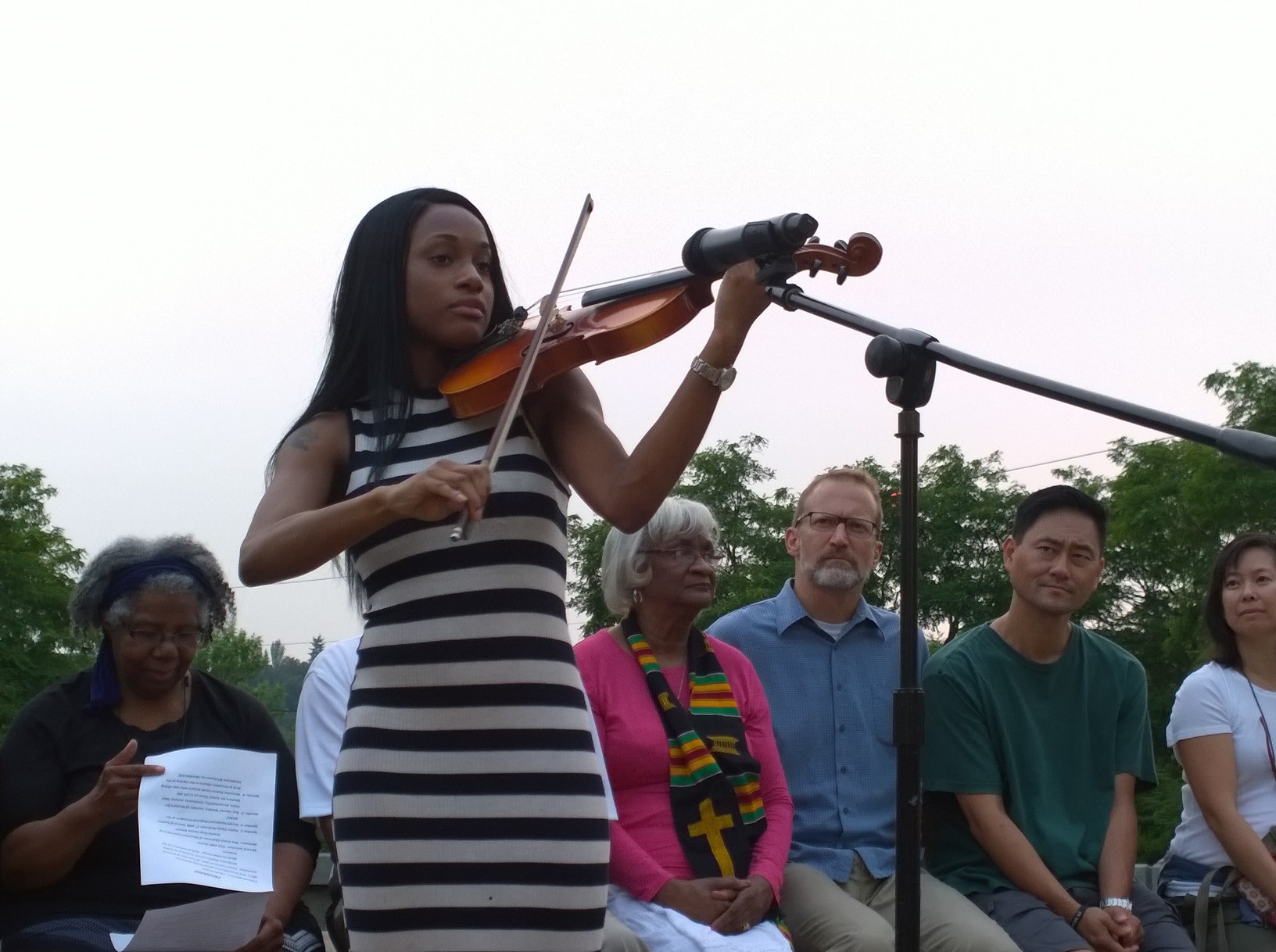 Marchers held hands and sang, led by a church chorus, "I love you... I need you to survive." Pastor Leslie Braxton of New Beginnings Christian Fellowship gave a detailed historical account of what the Confederacy stood for and the meaning of its flag. He said it belongs in the same category of the Nazi flag, as an unequivocal symbol of evil. "We still have not rendered a final verdict on our original sin," he said, "our sinful past of slavery and racial discrimination... The jury is now set—what will be our verdict?" Ansel Herz
Sponsored