Heat Waves, Open Windows, and an Increase in Burglaries

Seattle Police Department crime data does not indicate a seasonal preference for burgled homes—the most popular burglary months in 2014 were January, October, and September, in that order. Sgt. Sean Whitcomb says the latest data (from a beta version of an SPD crime-statistics program that will be available to the public in the near future) shows that residential burglary is up 2 percent across the city from last year.

But there's significant variation between neighborhoods: Columbia City has a 0 percent change in residential burglaries since last year (though crime is down in almost all other categories). Roosevelt/Ravenna's residential burglary rate is up 14 percent since this time least year while Capitol Hill's has increased 41 percent. Over half of those extra burglaries (28 out of the total YTD increase of 42) took place between May 31 and June 27—right when it got so goddamned hot we all started opening our windows.

Maybe that has something to do with the weather. Maybe not.

Which brings us to Slog reader Suzanne, who was at home on Capitol Hill recently, with her husband and dogs, when somebody (or somebodies) climbed through an open downstairs window, ate a bunch of snacks, took a phone charger from one room into another room, and left without taking anything but some raspberries and a fudgecicle.

Suzanne's full story, plus photos of the evidence (an empty package of Little Debbie Cosmic Brownies, an empty plastic raspberry container), is below.

I came home after jury duty around 5:30 and my husband and I hung around downstairs until about 6, then we both went upstairs. Our house is kinda tall and we were up on the top floor. We have a loud fan going in our room too so there wasn’t any way we’d hear anything happening on the ground floor. (We would have heard the dogs if they were barking, but not much else.) We were laying around talking until about 7:45 or so, then decided it was time for a burrito run. Husband went downstairs to leave, and saw there were food packages all over the living room that weren’t there before: Little Debbie Cosmic Brownies and Fruit by the Foot fruit roll-ups and an empty clamshell of raspberries. 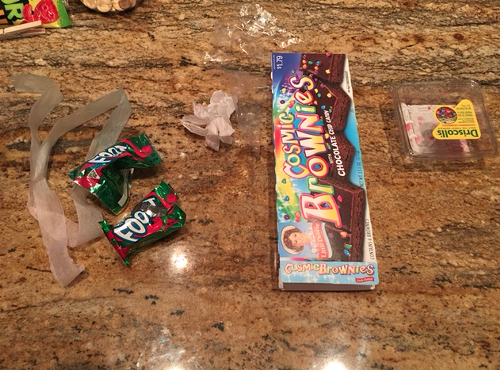 He looked around and noticed that the screen in the kitchen window was askew and on the wrong side of the window frame! Looked around the whole house and didn’t find anyone or see anything missing - there was even money right on the kitchen counter where he/she/they would have walked right past. (There were several good bottles of booze in plain sight too—I had just recently done a distillery run.) Nothing was disturbed—the only other things we noticed were that the phone charger had been taken from the kitchen and plugged in in the living room—they had unplugged that fan to plug in the charger, and they ate a fudgecicle and put the stick and wrapper in the trash can along with another fruit roll-up wrapper (brand new bag was otherwise empty). Three dogs in the house and nobody reacted! Came in through the window and stayed for a while, had a snack, charged their phone, left the same way they came in and even put the screen back! The brownie box they left behind still had four brownies in it :) (The fudgecicle and the raspberries were ours, the fruit roll ups and brownies were theirs.) 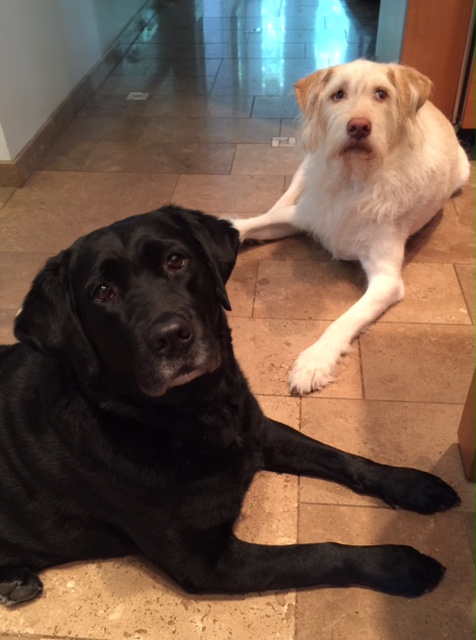 So we called 911 and said non-emergency, but that someone had been in our house—two officers came in separate cars and looked around, we told them the whole story and they offered to file a report, which we did. They said they hadn’t heard of anything like that in the area recently and that there wasn’t much else they could do.

I share a driveway with two other houses and the kitchen window is not visible from the street, they would have had to have wandered down this shared driveway and been looking around to see an open window. I usually leave that window open all day when I’m home and it’s hot—only button it up when I leave or when I sleep or take a shower.

So whoever they were, they were certainly dog-friendly! And at the end of the day there was no harm done other than an intense (at first, but quickly fading) feeling of violation. A good reminder to not be complacent about open windows on these hot days, and don’t assume your dogs will protect you if strangers climb in through them!

Weird! Aside from finding a stolen bicycle in the yard a couple of years ago, haven’t had any other crime-type things happen, for what that’s worth.

So there you have it.

Sgt. Whitcomb makes the excellent point that no matter what the crime stats are, an open window will be seen by some as an opportunity or invitation—maybe to steal a purse, maybe to eat some raspberries, or maybe to do something much worse. The odds of the latter happening are low, he says, but when things go wrong, they can go very, very wrong.

"Like we always tell people," he says, "please just be prudent."

Catch Fresh Content Streaming Now at the 14th Annual National Film Festival for Talented Youth
Featuring 234 films from top emerging filmmakers, plus live events daily! Streaming through Sunday.
The Stranger depends on your continuing support to provide articles like this one. In return, we pledge our ongoing commitment to truthful, progressive journalism and serving our community. So if you’re able, please consider a small recurring contribution. Thank you—you are appreciated!
CONTRIBUTE NOW

A Cappuccino for Now, a Bottle of Wine for Later

The Juice Club and Union Coffee collab is a bright spot during this terrible, terrible year.