The Morning News: Meet the Seattle Cop Who Writes Way More Tickets to Bicyclists Than Any Other 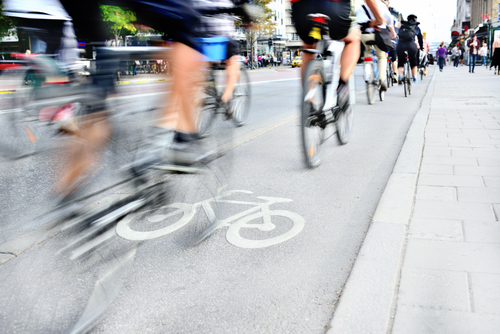 All of you better watch out for Officer Mulkey. connel/Shutterstock
Sponsored

Meet the One Seattle Cop Who Writes 124 Tickets to Bicyclists a Year: "Riding a bike in Seattle hasn’t been quite the same since Glen Mulkey started as a motorcycle patrol officer," writes Gene Balk in the Seattle Times. "After transferring from a Seattle Police Department SWAT team to a traffic detail downtown in 2006, Mulkey began his, uh, complicated relationship with the city’s cycling community. In just four days on the job — this was in July 2006 — he ticketed 37 riders. That’s more bike citations than most traffic cops write in a whole year. He was just getting warmed up."

Seattle Sees an Increase in Shots Fired but a Decrease in Homicides: "The spike in shootings comes in a year that has seen an increase in gunshot reports citywide," the Seattle Times reports. "At the same time, homicides by gunfire are down this year compared with the same period in 2014, according to Seattle police statistics."

Explosion at Aerospace Plant in Northeast Washington: "An explosion rocked an aerospace plant in northeast Washington, toppling large pieces of machinery, lifting an entire floor off its foundation and seriously injuring five people, authorities said Wednesday," according to the Associated Press. "The sheer power of the blast Tuesday night and the shrapnel it created caused the majority of the damage, and little to no fire ignited at Zodiac Aerospace in the small town of Newport, said Brian Schaeffer, assistant chief of the Spokane Fire Department who responded to the scene."

Poll Finds High Unfavorability Numbers for Sawant Citywide: Which may not matter much since she's running for reelection in District 3. However, PubliCola reports: "A June citywide poll of 400 likely Seattle voters found that Sawant... had a 42/40 favorable/unfavorable rating." The EMC poll also found Mayor Ed Murray with a 70 percent favorability rating and Seattle City Council president Tim Burgess with a 41 percent favorability rating.

Time for $15 in Tacoma? Voters will decide this fall. joyfuldesigns / Shutterstock.com

Tacoma Will Vote on a $15 Minimum Wage This November: "Tacoma is ground zero for the state's next big minimum wage battle," KPLU reports. "The city council voted 7-1 to put an initiative on the November ballot to hike the minimum wage in phases over the next three years, reaching $12 an hour in January 2018. After that, the minimum wage would rise every year at the rate of inflation. That measure will compete with an initiative to set a $15-an-hour minimum wage for businesses above a certain size starting next January."

A Local Reporter's Observations of the National "Media Circus" Around the Washington Plane Crash Survivor: Gary Horcher, of KIRO 7, watched network TV reporters trying to win "exclusives" with plane crash survivor Autumn Veatch and her family by offering them free hotel rooms and food. "While offers were considered and lures cast, Autumn and her family quietly slipped out a back door of the hospital (Tuesday night)," Horcher writes. "I understand David grew tired of the offers, and instead accepted the option of driving his ailing daughter home to Bellingham, with a police escort to keep everyone away. I wonder if it would have ever have gotten to that point, if everyone working to share Autumn's amazing story played by the same rules."

After Strong Opposition in Seattle, Zero Opposition to a Zip Line in Bellevue: "Angry West Seattle neighbors forced the city parks department in 2012 to abandon plans for a commercial zip line in Lincoln Park over a perceived threat to wildlife and the peace and quiet of a beloved urban sanctuary," the Seattle Times reports. "A similar proposal met the same fate in Woodinville when King County approached neighbors of Gold Creek Park who protested that the plan wasn’t compatible with existing uses. So how was it that last year Bellevue opened a zip-line course at Eastgate Park on a steep, wooded hillside minutes from Interstate 90?" Spoiler alert: Apparently, there are fewer anti-zip-line NIMBYs in Bellevue.

Bacon-Flavored Seaweed: "What grows quickly, is packed with protein, has twice the nutritional value of kale and tastes like bacon?" asks the Associated Press. "The answer, according to scientists at Oregon State University, is a new strain of seaweed they recently patented."

A Hole in the Mayor's Housing Affordability Plan? "Adding or preserving 20,000 affordable housing units in Seattle sounds great for renters on paper," KUOW reports. "But Sharon Lee, executive director of the Low Income Housing Institute, told KUOW’s Ross Reynolds there are some holes in Mayor Ed Murray's plan for housing over the next 10 years. 'The problem is that that particular count – the 20,000 new or preserved—doesn’t really take into account what we’re going to be losing over the next 10 years—affordable rental housing that’s unsubsidized and that’s not being counted in that mix,' Lee said."

And Just What Percentage of Single-Family Zones Would Be Up-Zoned Under the Mayor's Plan? "The rules definitely would change in all the single-family zones in Seattle," a mayoral committee member tells Danny Westneat.

Can Bill Cosby's Medal of Freedom be Revoked? President Obama says, "We don't have that mechanism."