You can meet all of the tan, French pilots today at Westlake from noon to 2 p.m. Mary Seton

You hear those Blue Angels in the sky? Well, starting around 12:11 p.m. tomorrow, they will be joined by these guys. Actually, these guys will precede the Blue Angels in tomorrow's show. Try not to be alarmed. It won't mean we're at war with another country. It won't mean Seattle is being attacked by sparrowlike fighter jets. It will just mean you're being entertained by yet another group of warplane ballerinas.
Sponsored

But these jets aren't helmed by good ol' fashioned, porn-loving, US Navy-trained pilots. They're helmed by suspiciously tan Frenchmen with too much time on their hands. These pilots are so European that if you look up the name of the lead pilot on Wikipedia you have to translate the page from the French.

Also, forget what I said about the Blue Angels—we need them now more than ever. I still contend that the planes are a sonically rapacious, ultimately condescending recruitment tools, but that was before yesterday morning, when a Swiss watchmaker parked this fucking Czech-made L-39 Albatros in Westlake Center.

After reading press materials that described the skills of the Breitling Jet Team as "unmatched" in their "aerobatics," I marched down to the Westlake shopping center, filled with hypocritical, patriotic vitriol. I wanted to figure out who brought these jets into town, why they brought them, and whether they thought they could beat our Blue Angels in a fair game of sky dancin'. As I approached Westlake, my jingoistic heart smirked when I saw the grille of the big Ford F-30000000 that pulled the European plane into the square.

Don't bring your warplane into Seattle unless you want some guy to fuck with it first thing. After a Swiss watch company parked this plane in Westlake, a rando Seattleite broke it almost immediately. Mary Seton

The first guy I spoke to was named Cyril. He looked like a tanner, more European Dan Savage, and on any other day I would have regarded him only as the sweet and charming man he seemed to be. But today I could only see him as a corporate shill for the enemy, Breitling. He told me that in the 1940s the watchmakers had outfitted British warplanes with Breitling instruments, a wink to the sense of WWII-era camaraderie Americans can summon when speaking with the descendants of the Allied forces—but this motherfucker was Swiss, I think. So, fuck him in his Nazi-bankrolling past. In any case, the only useful information I got from him is that you can meet all of the pilots today at Westlake from noon to 2 p.m.

Then I talked to a couple Ben Bridge jewelers, who were sitting in suits at one of those little metal tables in the square. They told me they were selling a few special Breitling watches at the shop. These watches had been calibrated with aviators’ concerns in mind. (You could perform certain calculations on the watch related to ascension levels, etc.) When I asked them about the difference between the Blue Angels vs. the Albatros-flying Europeans, they both agreed that the invasive flying outfit played more of a complementary role than a competitive one. Fucking spies. 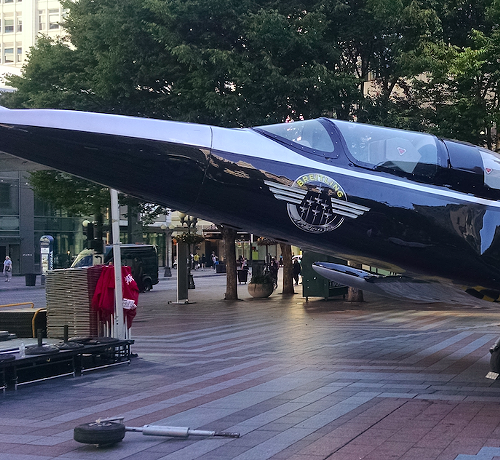 A close-up of some damage. Charles Tansley

I tooled around for a while, trying to find some nonpartisan people to speak with, but then I ran into the guy who drove the Ford truck that towed the plane into the square. He'd actually seen the Breitling Jet Team dance in the sky before, and told me that the Frenchies flying the Czech birds are more about finesse, whereas the Blue Angels with their afterburners and military training are more about muscle and power. "I'm not a baseball guy, really," he said, "but I'd describe it as the difference between a slugger and a percentage-hitter." He also said that some of the Angels had flown in the back of the Albatrosses and had really liked it.

Finally I talked to a security guard who had been working all day. He'd seen the plane when they brought it in at 3 in the morning. He had spoken with the plane’s official security guard, who said that previously, in New York City, the team had set up the plane in Times Square for a whole day and nobody even touched it. But the first thing that happened in Seattle was that somebody broke the plane. In the middle of the night, an unknown Seattleite managed to tip the plane onto its back end, causing surface damage you can see here:

I asked what he thought of the plane in general. He pointed to the Westlake area and said, “If you got money, you can throw it in that park.”

All this madness calls for a legally binding Slog poll.

Who will reign supreme in the skies above Lake Washington this weekend?