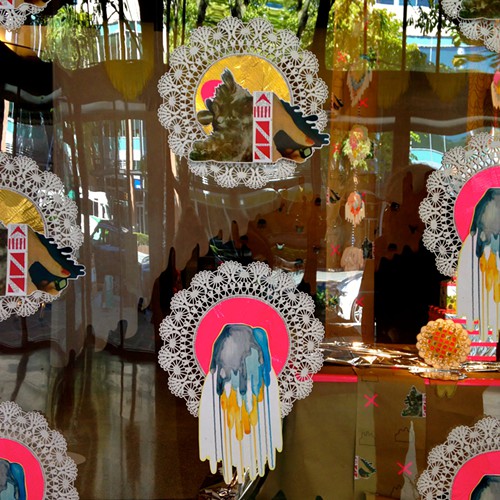 Are Seattle artists happy about Seattle Art Fair, or resentful it's not really about them? That's what radio arts reporter Marcie Sillman asked me today on KUOW 94.9 FM, when we talked about how annoying it is when people are amazed that there's good art in Seattle. Duh.

Sillman's questions brought to mind one of the big installations by a Seattle artist that's been commissioned by the fair. It's called Backdrop, and it's by Julie Alpert. (The other is by Jenny Heishman.) I don't think Alpert intended to imply directly that Seattle artists are more backdrop than front-and-center at this weekend's fair, but the implication is right there in the title, and I like that.

Alpert is a Washington, D.C. native who got her master's degree in painting at the University of Washington in 2008. But she's not really a painter. Her paintings are props in sets. She builds them for you to walk through, and to figure out their action as you go. In this way, her genre is mystery.

As a kid, Alpert was an actress. She's interested in pretending, and in what's pretend—what's almost real and trying to be.

What's real in art? It's a question that's going to come up again and again this weekend at Seattle Art Fair, as local artists hope to become real, like the Velveteen Rabbit in the children's story: to be adopted, taken home, loved.

“Real isn't how you are made,' said the Skin Horse to the Velveteen Rabbit. 'It's a thing that happens to you."

In the artificial wilds of Alpert's Backdrop, images and objects jostle to become real, because each one, on its own, suffers from categorical illegitimacy.

Her paintings are not paintings and her sculptures are not sculptures. They're fashion, fabric ("you know, what people call 'textiles' when they're being fancy," she laughed), wallpaper, figurines, tchotchkes, gifts wrapped up in shiny paper and bows. Subtly but consistently, they're from the lived experience of women and girls.

In a typical Alpert installation, there is no center, just an explosion of elements strewn across a space, crossing corners and strung between walls like streamers.

What's the gift? It's of entirely unknown substance, hidden away forever. It's not really a gift but more of a dark space for something, a cave heart.

Seattle Art Fair is like that: a gift of entirely unknown substance, a cave heart. Everybody wants to know what's going to happen there. The Fair expects 10,000 to 15,000 people, and they will fill it up with thoughts and actions and conversations, and your fair will be your fair and mine will be mine, and somebody will tell all of us whether enough money changed hands but it won't be our money, anyway. And then it will be over, and dozens of art dealers and collectors and paintings and sculptures will fly away overhead out of Sea-Tac.

But for now, Seattle Art Fair is the center of the action in the theater of art this weekend. It's the gift and the gift table, and we dance around it. Behind it, butcher-paper curtains darken a backstage where cut-outs cast shadows. Out in front of it, a scrim hangs facing the floor-to-ceiling windows looking out on South Lake Union, where Paul Allen and his company Vulcan own much of the real estate. Seattle Art Fair was Allen's idea, and he's why it's generated such buzz. You come in from Allentown to Backdrop.

The world of an art fair is a world where nobody wears pajamas. Stilettos. Lipstick. Ties. For all the money that changes hands, I've never actually seen a dollar bill at an art fair. Everything is dressed up.

In Backdrop, actual 3D sculptures are unpainted, silent and white against white walls. The paint is bright splats of color. That color spreads onto "art" mounted on the temporary walls (thrift-store paintings), as if these splats were liquid wallpaper.

Decoration is a dirty word, a homemaking word, not intellectual, invoking repetition, staleness, and false sentiment. Throughout Alpert's collages and painted fragments, there are blips of ventriloquized exuberance: xeroxed kittens, stripes, dots, fields of hot gold and pink duct tape slapped on white paper doilies. Providing ballast, there's the continuous presence of the downward action of gravity, a pull found in drips, splats, sandbags, and the sags in decorative sashes.

When I first started seeing Alpert's work a few years ago, I was unsure about something that feels clearer to me now. Art in everyday life is so often something nobody notices anymore, that's actually not special. As an artist, Alpert has to mourn that. But decoration is invested with celebration, the specialness of ritual. It appears and disappears for a party or a season.

Each of Alpert's installations is made of parts recycled from earlier works. Backdrop involves bits and pieces from at least two earlier installations, Splat! at Clark College and Three Generations of Decorations at The MacDowell Colony, the latter based on the way she, her parents, and her grandparents decorated home.

Alpert makes basic sketches, but otherwise builds each installation by improvising it from a limited set of materials she brings into a place with her. It's a performance, and these are the aftereffects. This is not what anyone has in mind when they hire an interior decorator to get them some art. But it's charged with love and sorrow, and even Alpert doesn't know which parts will go in the trash when it's all said and done.

Backdrop closes September 3. There's a mimosa brunch and artist talk at 11 am Saturday.

How to Make a Kick Ass Painting