Socialist Bernie Sanders to Hold Fundraiser at the Comet, Which Is Owned by a Prominent Critic of Local Socialists 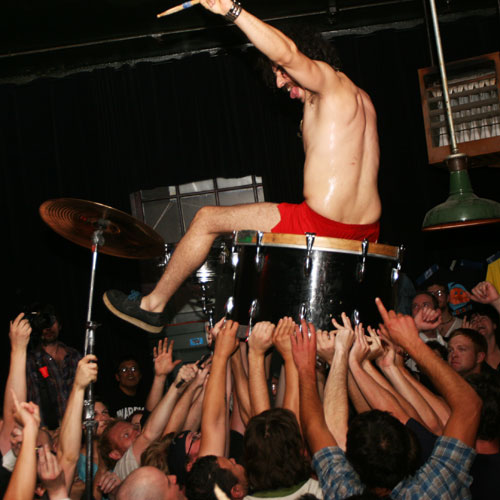 Some nights at the Comet have looked like this. (That's Tel Aviv band Monotonix at the Comet back in 2008.) We're guessing the only presidential candidate who'd strip and sit on a bass drum is Trump. Kelly O

This Saturday, raging socialist and $15 minimum wage advocate Bernie Sanders will hold a fundraiser at the Comet Tavern—which is owned in part by David Meinert, one of the most vocal critics of local socialists Kshama Sawant and Jess Spear during Seattle's $15 debate. Political analysts estimate that Meinert may have been responsible for up to 42 percent of Seattle's public rancor that year.

So what gives? Change of heart on the issue? A willingness to work across the aisle? Lost a bet?

His answer, by email:

Well, I am, and always have been for raising the minimum wage. My biggest criticism of it was the final plan being too complex, and taking too long to get to $15 (as we all know, $15 in 3 years isn’t $15). I also thought there should be total comp (counting tips), and some exemption for mom and pop business (not mine) and small non profits. So no change of heart. I suspect Bernie and I might disagree on some of the specifics of how to raise the minimum wage, I think we agree on the overall goal, and on many, many far more important issues. I’ve been a fan of Bernie’s for a long time, and am super excited he’s running for president...

End of the day, Bernie is the only true progressive in the race. I agree with him more than any other candidate. I’m psyched he’d choose to do a fundraiser at an historic bar on Capitol Hill rather than a mansion in Medina.

Tickets for the event, which Meinert estimates will last for around an hour, start at $200.

Slog PM: Let's Get to 90% Turnout, King County! We Want an Invite to the Socially Distant Wedding, Sue and Megan!

Alexandra's Macarons Opens and More Seattle Food News You Can Use This Week: October 30, 2020 Edition