"Open your mouth and get ready to swallow." lev radin / Shutterstock.com

5:40 pm: If you missed the kid's table debate earlier today, read this. Carly Fiorina did laps around everyone else. Also: Rick Santorum thinks gay marriage is like the Dred Scott decision. And even the one pro-choice guy in that group wants to defund Planned Parenthood. If you can believe it, tonight's debate tonight is a different collection of asshats. The top 10 asshats in the running: Donald Trump, Jeb! Bush, Scott Walker, Marco Rubio, Ted Cruz, Rand Paul, Mike Huckabee, Ben Carson, Chris Christie, and some guy whose name we always forget. Oh yeah, John Kasich.

5:52 pm: Even the fools at Fox think Carly Fiorina won the debate earlier. Meanwhile, someone seems to have successfully bribed some Clevelanders into get their asses into the seats behind the moderators' heads. Or maybe they're all a bunch of salty union auto workers who are excited to hear what the GOP has to say about job creation in one of the capitols of the rust belt. 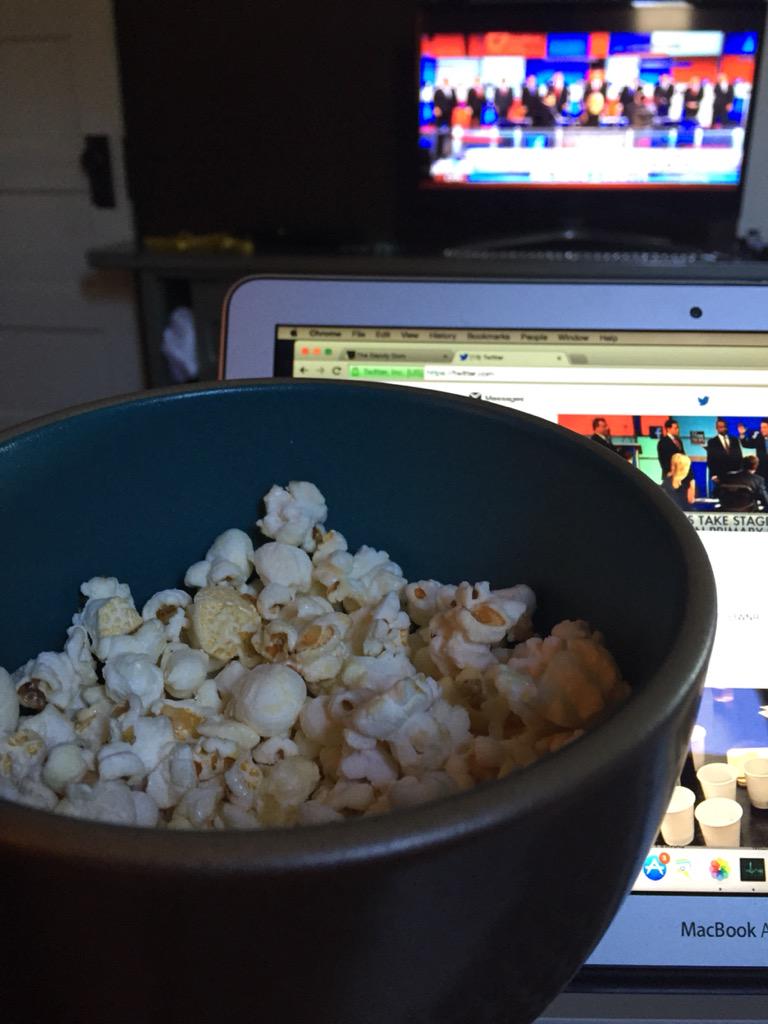 5:57 pm: Every one of the top 10 candidates looks like a pile of mashed potatoes in a suit.

6:06 pm: Can we talk about Marco Rubio's nascent combover? Meanwhile, Ben Carson comes out strong in favor of human beings "having a brain." Thanks, doc!

6:11 pm: Moderator to Trump: "You've called women you don't like 'fat pigs,' 'dogs,' and 'disgusting animals'..." and Trump interrupts, "Only Rosie O'Donnell." After some throat-clearing, Trump says the worst problem in the country is "political correctness."

Trump: "What I say, is what I say. I have been very nice to you, Megan, but I could not be." OH MY GOD. #GOPDebate

6:24 pm: Jeb! wants illegal immigrants to "pay a fine" before they can access the American Dream because he's running for Parking Attendant of the United States.

6:25 pm: Chris Wallace basically says to Trump, "Share your proof with the American people that the Mexican government is sending rapists over the border." Trump says that he went to the border last week and he talked to some people.

6:29 pm: Jeb! looks so nervous, so uncomfortable. It's as if he peed just little bit and is worried if America can see the spot.

6:31 pm: Rubio: You know what I don't like about people trying to escape horrible violence in Guatemala? It’s so RUDE. *fans self rapidly*

6:35 pm: Nothing chills the heart like a Fox moderator saying "Now we're going to talk about terror."

6:37 pm: Christie on protecting homeland: "We have to give more tools to our folks to do that." So—spying is good when Republicans do it.

6:39 pm: Rand Paul to Chris Christie re Obama: "I know you gave him a big hug, and if you want to give him a big hug again, go right ahead." Christie says the only hugs he gives are hugs to people who lost family on 9/11.

6:42 pm: Jeb! Bush on Iraq: "It was a mistake. I would not have gone in." He also says Barack Obama "abandoned" Iraq. He also wants to go to war with ISIS with "every tool at his disposal" because... he... wants to make more phone calls to the families of dying veterans? Add Mopey Concierge of the United States to Jeb!'s job application.

6:48 pm: Paul to Trump: "The Republican party has been fighting against single-payer for a decade." Um... for 75 years, actually.

As an Australian watching the #GOPDebate, this is simply most awesome and batshit insane political event I've ever seen.

6:49 pm: Scott Walker just said that he wants to spend his time attacking Hillary. Yes. Keep attacking Hillary, totally undistinguishable GOP dudes. That'll help you stand out from the rest of the crowd.

6:51 pm: Mike Huckabee, a "Christian," calls for a regressive tax on consumption—i.e., poor people pay a much higher percentage of their income on goods than rich people.

Scott Walker was asked if he'd let a woman die rather than have an abortion. He won't answer. http://t.co/zQiVgNuLRs pic.twitter.com/v5z3dl2axL

6:55 pm: Thank god Rubio and Jeb! are coming out so strongly against national standards for schools. Finally some recognition that George W. Bush's "No Child Left Behind" was dumb. Are any of them going to come out in favor of letting teachers decide what they teach their kids?

6:59 pm: Chris Wallace asks, "What's your plan for taking Hillary Clinton on?" but unfortunately he asks Kasich, whom no one has ever heard of and no one cares about. Then he asks Carson, who says, "If Hillary is the nominee, which I doubt..." Wow. Meanwhile, his answer is even more blank and generic than Kasich's.

Carson: "If HRC is the candidate, which I doubt, that would be dream come true—she counts on taking advantage of useful idiots." #GOPDebate

7:03 pm: Jeb! is a worse speaker than Mitt Romney. Remember what a cheesy fondue spout Romney was? Jeb is so much worse. He can't talk. He's so nervous. And he thinks he's some kind of poet.

7:05 pm: Sooooo, building a single pipeline, getting rid of a money-saving heath care system, and "fixing a convoluted tax code" is the way to double GDP? Got it, Jeb! By "fix the tax code," you mean we need to raise the marginal tax rate to 90%, right?

7:07 pm: Walker promised to create 250K jobs in first term. WI added half that. Given your record in WI, why should voters believe you?

7:09 pm: This debate is like having 10 new racist, sexist, and homophobic grandparents at the dinner table. It's so fun whenever Huckabee says "pimps."

Congratulations to everyone who put money on “pimps and prostitutes” making an appearances before the close of the Republican debates.

7:16 pm: This stuff against the Iran deal is bullshit. The Iran deal is a good deal. It's not true we "got nothing" out of the deal, as Huckabee contends. Click that link. Go watch that video and let the president explain what we got.

It's not really a conversation about Iran without Lindsey Graham pledging to invade Iran, Iraq, Syria, Columbia, and Portland. #GOPDebate

I don’t think Alex should have allowed 10 contestants, and they aren’t answering the form of a question.

7:23 pm: Oh good, "social issues"! Jeb! gets asked about being a director at a charity that gave a lot of money to Planned Parenthood, and he looks like a turd is escaping his ass as he tries to give an answer that makes it sound like he didn't even know Planned Parenthood got that money.

7:24 pm: Jeb!: "I created a culture of life in our state." By creating a culture of life, he means life for the cancer growing in the bodies of women who use Planned Parenthood for regular medical screenings.

American Women: Scott Walker thinks your fetus should live, you should die. Rubio thinks you should bear your rapist's baby. #GOPDebate

7:28 pm: Just a reminder that the economic growth in Florida that Jeb! keeps claiming as his own was a direct result of the housing bubble. That bubble burst for Florida and for the US.

7:32 pm: Bernie Sanders is tweeting this.

I can't stop staring at donald trump's mouth. It's like a trout mated with a reconstructed anus.

7:42 pm: Huckabee: "I'm not sure how paying for transgender surgery makes our country safer." Some trans people are soldiers?

7:46 pm: She just said that up next was "closing statements" and "God." GOD IS ABOUT TO MAKE A CLOSING STATEMENT? Um.

did someone just spill something megan kelly's circuit panel

7:50 pm: Some rando—"Chase Norton on Facebook"—wants to know how schizophrenic they are whether any of them have received any specific messages from God about what to do first. Now they're all trying to out-God each other. Scott Walker just said "the blood of Jesus Christ."

Cruz: "The scripture tells us, 'You shall know them from their fruits.'" Too easy. Not going to touch it. #GOPDebate

7:55 pm: Rubio: "I think God has blessed us. He's blessed us with some very good candidates. The Democrats can't even find one."

7:56 pm: Awww, no fair, we're moving on to closing statements before Donald Trump talks about God? You're fired.

megyn kelly: do you think that god is a trapezoid carson: what rubio: colors can be eaten with a fork walker: i am sound

ugh i want an abortion so bad right now

8:00 pm: Ben Carson wants to "pick up the baton of freedom." Huckabee says Hillary "doesn't know how to govern" and that "once again we can be one nation under God." Walker says, "I'm a guy with a wife and two kids and a Harley" and he wants you to think of him as "aggressively normal." Trump says, "Our country is in serious trouble. We don't win anymore," mentioning China, Japan, Mexico, and repealing Obamacare.