A Rally of Loners: (Ayn) Rand Paul at Town Hall

I spoke with these young supporters after the rally. They liked Paul's "common sense solutions." Jack Dorito
Sponsored

The crowd of about 500 felt small in the sun-blasted auditorium at Town Hall, which holds more than twice that many. I expected to see row upon row of cane-shaking elderly people in cowboy boots lining the pews. Though there was a little bit of that, the crowd was a mix of ages, and there were not zero people of color (though I'd be surprised if there were a dozen). After the rally, however, a woman in the lobby did a bit of freelance demography: “Here’s your crowd recap: There’s no waiting in the ladies' room, and a line out the door for the men’s.”

It seemed like the rally was a first for many in the crowd, which makes sense. Libertarians and the libertarian-curious like to be left alone, plus, many members of the crowd were children whose parents had dragged them along. 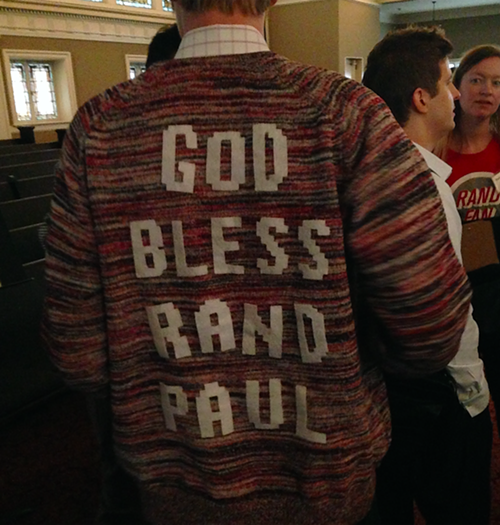 This guy was making a lot of new friends with his sweater, though. Buster Kinkon

Photographers were coaching people to hold up their signs, asking if anyone would "#StandWithRand." A young volunteer next to me asked if anyone wanted to get a "Pre-si-dent PAUL" chant going. The people around me said "okay," in the way you'd say "okay" if you asked to participate in an ice breaker on the first day of school. To be fair, it was 9 a.m., and people may have been busy trying to reconcile the preshow pump-up jamz with reality. CCR's "Fortunate Son," played, as it often does at political events, but Paul's a representative's son who is now a senator himself, so whaa?

In any case, Matt Dubin, the vice chairman of the Republican Liberty Caucus of Washington State, came on to hype the crowd. Were they ready to Stand with Rand? They were. Why? Because Paul's a "different kind of Republican," the kind who can "win Washington State." Dubin then spoke the words guaranteed to stir the souls of any warm-blooded American: "We've got a short video for you."

A campaign video provided a little background info on the life of Dr. Paul. As a young man, he was a coin collector with an affection for his grandmother. When her sight failed, "HE BECAME HER EYES," as the chapter heading on the video noted, which inspired him to become an ophthalmologist. 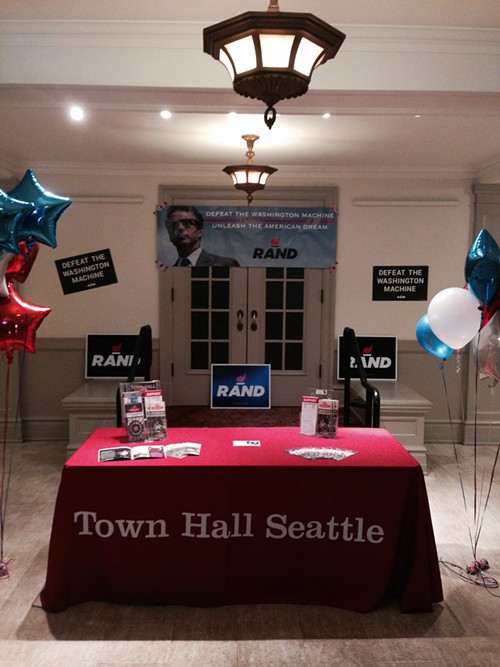 Why is Rand wearing sunglasses in his promotional materials? Ohhhhh riiiight, because he's an eye doctor. Jack Dorito

Washington State representative Elizabeth Scott, who spoke after the video, didn't miss the opportunity to make a pun. "He fixed the sight of 200 Guatemalans," she said, "imagine what it will be like when he brings that kind of clarity to the government." She managed to rouse the crowd a little by dropping a few key buzzwords, starting strong with the question, "How many of you are tired of the nanny state micromanaging your home? From your lightbulbs to your toilet to your self-defense." She also mentioned our right to life, liberty, and property; the fact that we gotta get rid of this "crony capitalism"; and she also extolled the virtues of voluntary charity.

Scott was followed by Cary Condotta, who said that Washington was "no longer a blue state, no longer a red state" but rather "it's a FREEDOM state.” 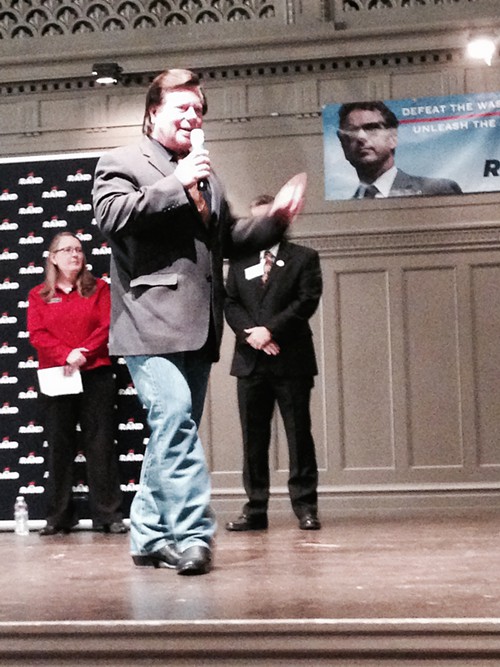 Washington might be a "freedom state," but Condotta's dye job could use a little regulation. Buster Kinkon

After making the claim that his Liberty Movement within the house was on the rise, Condotta stopped peacocking around and said, "The doctor's in the house," combining the cliché "the doctor is in!" with the stock phrase "is there a doctor in the house?" an introduction that slightly undermined Dr. Paul's credentials.

FINALLY, the man himself strode manfully onto the stage wearing blue jeans, boots, and a bright red tie. 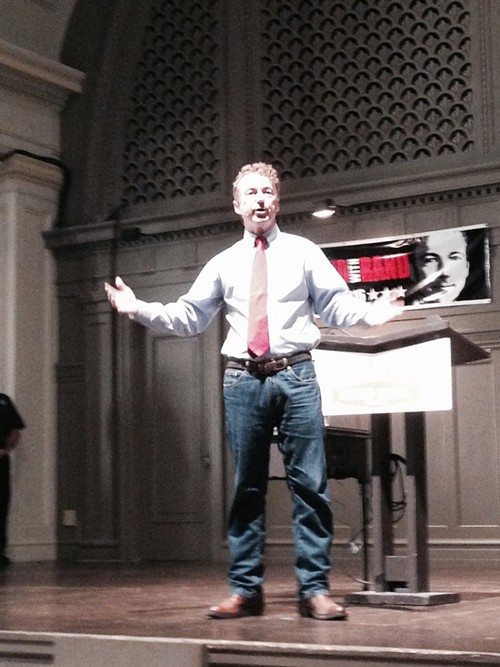 Paul gave his standard stump speech. He presented himself as an outsider who was running for office because "he was tired of fake conservatives." There's an "unholy alliance" between Republicans and Democrats, he said, who've conspired to spend our money at a rate of "literally a million dollars a minute." The volunteer next to me jumped up and shouted, "Boo on that!" Paul then made some room for himself in the race by lightly disparaging Trump for being an idiot; Christie for collecting data; John McCain, Bush(es), and Clinton(s) for war mongering.

He used the Bill of Rights as a loose frame for the speech—pointing out various infringements on the second, fifth and sixth amendments. The crowd only seemed excited/pissed about a few things. (1) Government surveillance. Anytime Paul mentioned bulk data collection, or suggested that the government was spying, the crowd went wild with boos. (2) Scrapping the tax code. Paul wants to "starve the beast" of big government by keeping money local, not shipping it off to Washington where it will be spent poorly.

Paul was also sure to bring up the specters of gun control and government seizures. If you doubt his stance on the Second Amendment, he'd invite you to come to his home unannounced. And did you know that civil asset forfeiture is a really big deal? It is, but Paul's example was a hypothetical one—a police officer pulls over a rando and demands he hand over $200 for no reason—designed to incite fear.

He supported his claims about various government infringements of the Sixth Amendment by citing the case of Richard Jewell, the guy who was falsely accused of planting a pipe bomb at the Olympic games in 1996. The FBI was investigating him because he fit the "lone bomber" profile. In one of the more revealing, unscripted moments, Paul briefly characterized this type of person as "a loner who wore glasses," and then he jokingly said, "I see a lot of you out there wearing glasses," which sparked, I imagine, genuine fear in the hearts of people who are paranoid, however rightly, about the government spying on them.