There was a benefit last night at the Neptune for striking Seattle teachers. Ansel Herz
Sponsored 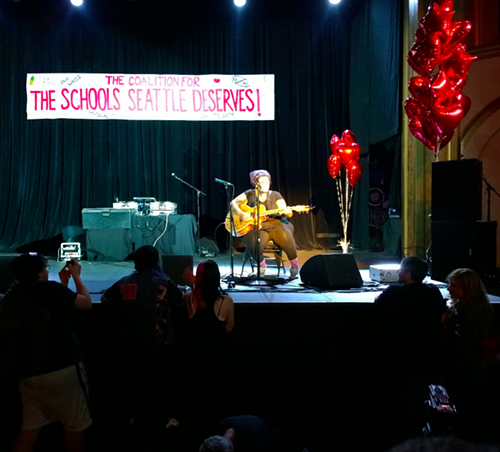 Kimya Dawson performed and "was wonderful," Ansel says. Has she ever done anything that wasn't wonderful? Ansel Herz

There Is No School Today—Still: Last night "teachers-union representatives said too many differences remain with the district over pay, student testing and a proposal to lengthen the school day."

Kimya Dawson, Aesop Rock, Katie Kate, and Others Performed Last Night at the Neptune in Support of Striking Teachers: Kimya Dawson said, "I have never thrown something so big together so fast in my life. You know why it's possible? Because the community stands behind the teachers. There is soooooo much love and gratitude."

Garfield High School Teacher Jesse Hagopian Told The Stranger: "We raised thousands of dollars for educators who will have trouble making ends meet during the strike. This is a new beginning to a coming together of artists and organizers in Seattle to defend public education and advocate for social justice."

Is There Anything That Could Fix This Mess? Why Yes, Yes There Is: As Jen wrote last week, the Washington State Supreme Court could shut down every school in the state. Here's how that could help.

Eli Sanders and Jen Graves Went into a Rage Spiral: About public school funding on our podcast Blabbermouth.

Meawhile in Pasco, Striking Teachers Have Reached a Tentative Deal: And school begins out there tomorrow.

Meanwhile in the Seattle Times: They're publishing headlines like "State Supreme Court: Activist Justices, or Just Different?" Holding Olympia in contempt for failing to adequately fund schools is one of the Seattle Times's examples of judicial "activism." Fer fuck's sake—they're forcing the legislature to face its constitutional obligations, which is their job.

Evidence of Mortgage Document Irregularities in Seattle Being Withheld: David Dayden reports in the Intercept about the false documents mortgage companies use to foreclose on homeowners, and how a recent King County audit "calls into question documents within the recording office." The City of Seattle has not released the findings and doesn't want to talk about them.

Gun Violence Is Way Up in the Central District This Year: And most of the victims have been young black men.

Lindy West Wore a French Fry Shirt to the Genius Awards: You must see it.

Yes, We Will Have More Genius Awards Photos on Slog Today: As soon we we scrape the sleep from our eyes.

In Other French Fry News: In New York City this morning, "an on-duty World Trade Center security guard slashed the face of a man who placed a french fry on his head in a McDonald's."

Egypt's Interior Ministry Used the Word "Whilst" in Their Statement About What Happened: "A joint force from the police and military, whilst chasing terrorist elements in the oasis area of the Western desert... accidentally engaged four four-wheel drives belonging to a Mexican tourist group." Okay, that's a really whimsical way of describing the accidental massacre you just perpetrated.

New York Times Launches a Media and Technology Fellowship in Honor of David Carr: Here are the details. In case you're new, David Carr was the best. He once positively mentioned The Stranger (at the 3:40 mark in this video) and we're still aglow about it.

ICYMI: I Was Kinda Cranky About the First Late Show with Stephen Colbert: And I hadn't watched it since, so I missed this amazing Kendrick Lamar performance. Whoa.