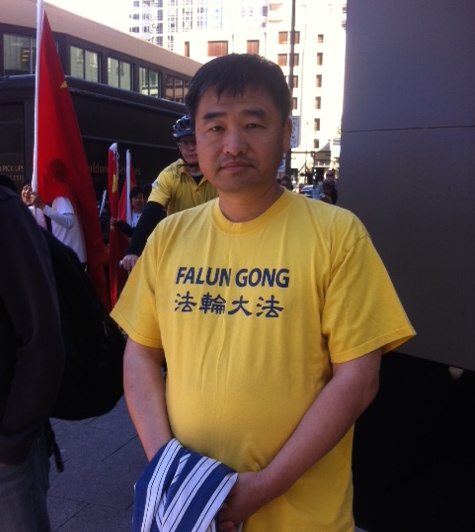 I am here for three reasons. Number one to let the world know that the Communist Party in China is still killing people. Number two, we're here to let humanity speak. Number three, we're trying to raise the consciousness to concern and help the human rights situation in China.

I am a Falun Gong practitioner. Falun Gong is an ancient meditation group that's been persecuted by the Communist Party since 1999. And the war right now, currently, it's extremely focused on the organ harvesting issues taking place in China since 2002. It's believed that practice is still going on. They are forcefully taking the organs from Falun Gong practitioners that have been jailed and selling them in the market. European congress passed a resolution already to first ask the Chinese government to stop the bloody practice. And also ask to let independent investigation take place in China to investigate what's being done between 2002 and 2008 with organ harvesting. US Congress has also drafted a resolution on the floor concerning similar issues.

I hope all these American corporations, when they're doing business with China, I hope they will uphold American values. The values of freedom, religious freedom, human rights, liberty and pursuit of happiness.

You came up to Seattle from San Jose specifically for this?

Yes. I exited the airport as Xi was exiting, too. He's there at the same time that we are here.

How long are staying?

We are going to stay until late tomorrow night.

I read that Xi's security team didn't want to be greeted by the sight of protesters while he's here. How are you going to get around that?

Well, what we do here is raise our flags and our banners higher. If you came here earlier, you're going to see what happened—the Chinese embassy and consulate mobilized their troops. When we stand on the sidewalk, they just stand in front of us. They try to raise their flag and cover our message.

Are they still here?

All these red flags.

Have there been any conflicts today between the different groups?

They have been bullying us all along. They have been saying that all the very bad words... you know. Here, one of the ladies holding China's Communist flag, she was pointing a finger to a young girl, 18, 19 years old, and she was saying, "You deserve to be raped by the whites." It's really bad.

I don't even know what to say when I hear that. But I think whatever they say represents the true color of themselves. 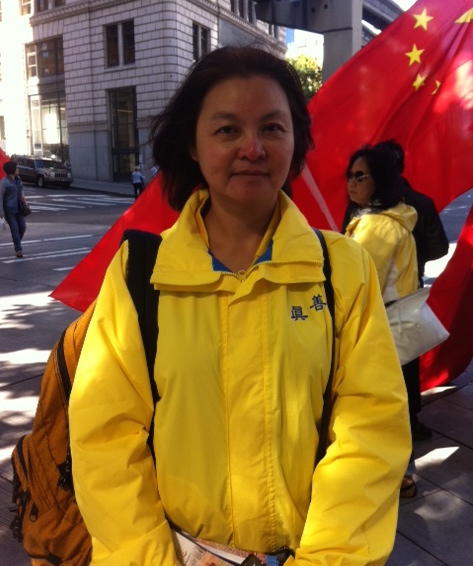 What are you playing on that speaker?

I'm here to tell other people and also the president from China I hope they stop the persecution of the Falun Gong practitioners. Practitioners improve mind and body through meditation. They're all innocent people. And China persecutes them, puts them in the labor camps, harvests their organs, just cuts their bodies, get their organs out, and sell for profit. Today, more than two million people have died from that.

Do you know anyone who's experienced that?

Yeah. A lot of practitioners in China, they get persecuted, that's why they come to America. To save their lives. There's a woman who was prosecuted—she's standing over there. You can interview her.

Where are you from originally?

When did you come to the United States?

Is there anything you wish our political leaders or tech leaders would say to President Xi? 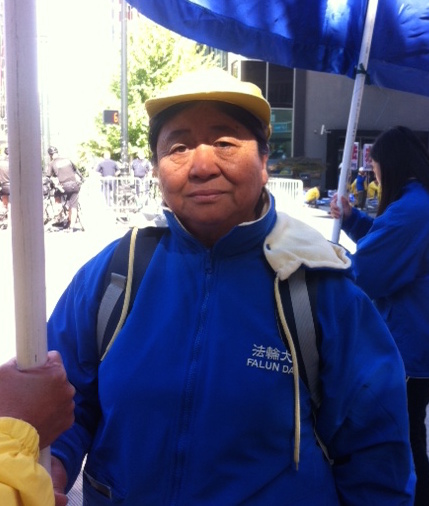 The following interview was translated by Kathy Ma.

[My] son was 27 years old. He practiced Falun Gong and was persecuted by the Chinese government, the previous president. And he was persecuted, and he died.

I am so sorry. When did he pass away?

How was he persecuted?

Yes, force-fed him. And because his body, no eating, no drinking, the body was disordered. And after that he died.

I'm sorry. When did you come to the United States?

What would you like the leaders meeting with President Xi to say to him?

Many many million of the practitioners are the same as [my son]. Jiang Zemin is the one who started to persecute the Falun Gong practitioners. This president, Xi Jinping, [should] stop this persecution.

I went to jail, too. For two years.

Did you get political asylum in the United States?

What was your son's name?

I'm protesting organ harvesting in China. Before, Jiang Zemin started the persecution of Falun Gong in 1999. For no reason.

Falun Gong is to be truthful, compassionate, and tolerant. That's all they want to do.

I'm standing here to show President Xi to stop persecution in China. That's all our premise is.

Where are you from?

Shandong. Yeah, my father was in jail five times. That's why I'm here. He [received] government protection and made my mother and me come to America. The last time he [was] in jail, it was from a train station. I look for my father, and I go to the jail to find my father. He did not eat anything for half a month.

He went on a hunger strike?

He did not eat to protest. The body was very weak at the time. So the government didn't jail him anymore. They let him out.

He escaped from China. At the beginning of 2011, he got out.

We can practice here for free, and nobody's going to persecute us. [My mother and I] came out here, September of 2012. 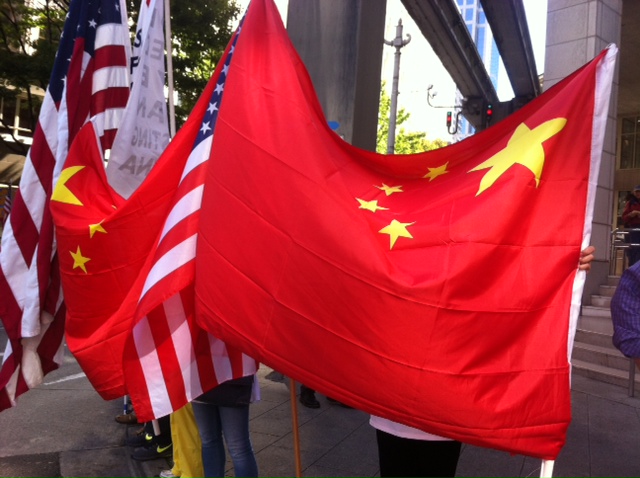 Yang (last name) didn't want her face photographed, but she allowed a photo of the flag she was holding. SB

YANG (DID NOT WANT TO SHARE FIRST NAME)
Engineer
Seattle

Do you live in Seattle?

There are several protesters out here today. How do you feel about their presence versus yours?

What's the most exciting part of his visit to you?

I would say that's where I was born. And he's the leader of our country. And his visit here is pretty significant for us.

There was news that President Obama was considering sanctions against China because of cyberhacking. What do you make of that?

I personally think that's a different level of concern. As the president, he needs to take care of different perspectives. But as an individual, I think there is definitely room to work on a joint effort for cyber crimes. Instead of against each other—I don't think that is the right approach. Sanctions never work well. But working together, joint effort, will.

What do you do for a living?

[Laughs.] My major is in cybersecurity.

Some of the Falun Gong protesters are saying that people holding the Chinese flag are trying to obscure what they're doing, or that you've been paid by the Communist Party. I'd like to give you a chance to respond to that. Have you?

No. We are volunteers. We're not organized. On the street, actually, a couple joined us. And they're from, like, Urumqi. That's the capital of Xinjiang [province].

These interviews have been condensed and edited for clarity.