The initial agenda to spend the night at Re-bar’s Discwoman Showcase was derailed when I got a hankering to see versatile UK beatmaster Clark at Showbox and Fabric club resident DJ Daniel Avery at Crocodile. You know what they say about the best-laid plans… especially at Decibel Fest, where a nightly surplus of goodness keeps you in a chronic state of energy depletion euphoria. But rest assured, the first two acts at Discwoman—Bardo:Basho and Experimental Housewife—made me feel smug in my original conviction. Bardo:Basho (Seattle producer Kirsten Thom, co-boss of Elevator) travels in her own lane in Seattle’s bustling technoscape: her m.o. is to make her transitions at a methodical pace, going heavy on the tom-toms and hand drums while refracting her own spiritual, Lisa Gerrard-like voice chorale style over earthy, enchanting dub techno. Dead can dance to this (sorry, not sorry).

Experimental Housewife (aka New Mexico's Evelyn Malinowski) raised expectations by wearing a T-shirt bearing the logo of RVNG Intl, one of the world’s best labels (by the way, it’s put out two crucial collections by former Seattle electronic musician K. Leimer and his band Savant). Her first two tracks did not disappoint, as she ground out a hypnotic species of downtempo noise techno that recalled Techno Animal’s 1995 landmark LP Re-Entry. At this point, I bolted for Clark, but in retrospect should’ve stayed. Someone who caught Experimental Housewife’s whole set said it turned more ambient after the halfway point. I love me some live ambient music on a Thursday night. Oh well…

Over at Crocodile, it was packed to the rafters and it took a while to get in to see Daniel Avery. If you can judge the quality of a show by the pungency of the body odor in the joint, then this one was off the hook. Avery looked to be using CDJs (we let it slide because he traveled overseas) to spin nonchalantly hard, linear techno of the psychedelic persuasion; the synergy with the visual projections behind him was really on point. His selections had scant melodic content, but with techno, it’s axiomatic (to people like me, anyway) that the colder and more machine-like it is, the better. 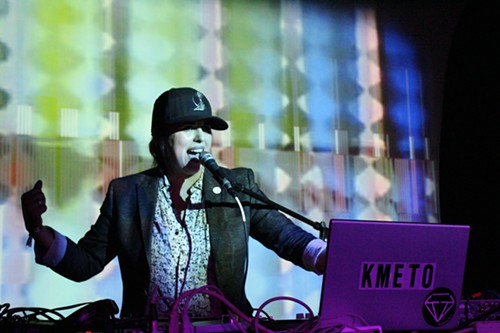 Back at Re-bar (where it smelled a lot better, to be honest), Portland singer/producer Natasha Kmeto was finishing up a performance that had the crowd eating out of her multi-tasking hands. This was neo-R&B (Rhythm & Bravado) of exceptional uplift and feel-good flow. Finally, at 1 freakin’ 40 am, Gary, Indiana’s footwork queen Jlin commandeered the stage and proceeded to infuse the club with seriously intense and weird vibes (do cop her Dark Energy album on the highly respected Planet Mu label posthaste). She coaxed strangely angled beats and swarming bass tones that spasmed with a jittery fierceness. A local producer who records under the name QP confided, “I’m transfixed. This is why I come to Decibel—to learn about acts I didn’t know.” 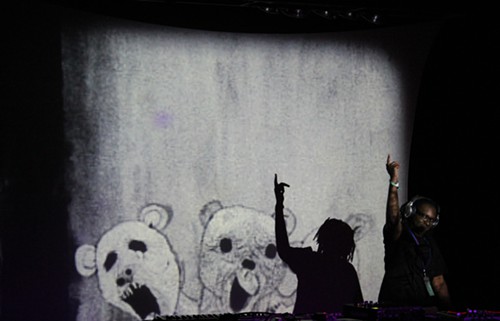 Later QP said, “[Jlin] plays with rhythms in a way I’ve never heard before.” I concur. Jlin’s grooves are elusive, jagged, tumultuous, and militantly distinctive. Sometimes they sounded like boulders caroming inside a washing machine, sometimes hitting like staccato whipcracks, sometimes coming off like ’90s-era Squarepusher slowed to 16 rpm. But no matter how unconventional Jlin’s music got, she had much of the crowd valiantly dancing... after 2 am on a school night. It sounded like one very odd and special version of the future of club music.